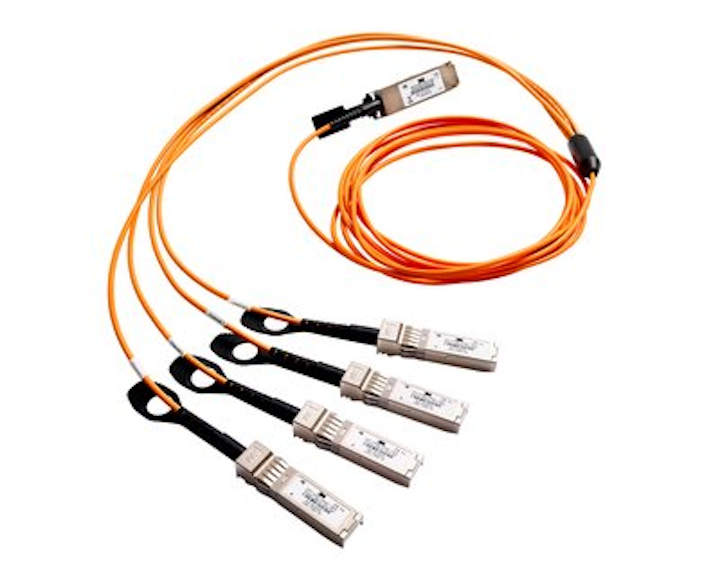 The hybrid AOC assembly transitions a single QSFP+ port with four parallel channels to four individual, single-channel SFP+ ports in top-of-rack (ToR) applications and at distances up to 100 meters. The fanout cable assembly addresses a common data center and HPC problem in which QSFP+ switch ports are under-utilized. Because the 3M fanout assembly allows direct-attach transitions at a one-to-four QSFP+ to SFP+ ratio, more 40 GbE uplinks can be deployed.

With no optical splices, 3M says its AOC assembly for QSFP+ to SFP+ applications provides seamless, end-to-end connectivity over bend-insensitive multimode fiber. With the assembly, the number of connections is cut in half compared to traditional module solutions, claims the company. Fewer connection points can improve reliability, reduce optical loss and latency, and lower power consumption.

The cable assembly supports cost-efficiency in a number of ways, asserts 3M. Each of the cable assembly's parallel channels is synchronized to provide interoperability between the 40 GbE and 10 GbE interfaces, which limits the amount of optical debugging and tuning required, which can speed up installation. The lightweight, thin fiber assembly makes cable routing and dress-out easier while allowing better air flow in the rack, potentially reducing cooling costs. In addition, one product replaces three (two types of transceivers and a fiber cable), lowering cost and reducing purchasing and inventory management complexity.