Previously, this magazine has devoted a significant amount of coverage to the hazards of being fooled into purchasing and, worse, installing counterfeit communications cabling. It’s a topic that always bears some revisiting, because the threat is apparently ongoing. 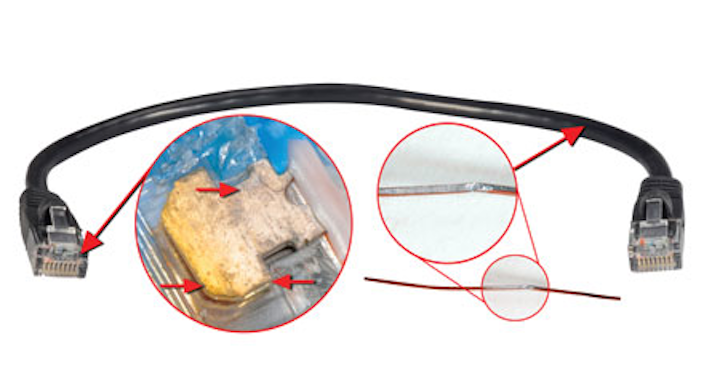 Previously, this magazine has devoted a significant amount of coverage to the hazards of being fooled into purchasing and, worse, installing counterfeit communications cabling. It’s a topic that always bears some revisiting, because the threat is apparently ongoing.

A video that the Communications Cable and Connectivity Association (CCCA) posted to YouTube earlier this year, and has been viewed more than 4,000 times as of mid-April, shows what happens when a counterfeit cable gets put to a burn test. In the video, a cable that passes itself off as being plenum-rated is subjected to the Steiner Tunnel test, which a cable must pass in order to qualify for the plenum rating. To say the cable fails the test is a significant understatement.

The CCCA video's narrator reminds us, "It's in everyone's best interest that if a fire breaks out in a building, communications cables don't act like a fuse and carry fire all over the building."

Headquartered in Miami, FL, with offices in the UK, Spain and Latin America, Beyondtech is a provider of fiber-optic and copper network connectivity ecosystems. A recent blog article found at the company’s website is entitled “How to know if your Cat 5e, Cat 6 or Cat 6A Ethernet cable is counterfeit?”

“Installing counterfeit cables is a risk that eventually will have an expensive cost and could be considered negligence, fraud and criminal violation of building code regulations,” observes Beyondtech. “In some cases, the contractor could even face imprisonment.” The company goes on to succinctly outline three major scams that counterfeit cabling manufacturers try to foist on unwitting buyers. Quoting the blog directly, these scams are as follows.

Using steel or aluminum instead of copper: Copper-clad-steel or copper-clad-aluminum is a classic method manufacturers use to save money. It consists of using an aluminum or steel core instead of costly copper, which causes high attenuation and poor signaling. In the long run, network speed will be affected.

Using re-ground plastic: RJ-45 connectors that don’t pass the quality test at the factory and turn out as rejected can be re-ground back to pellets and added to the plastic used to make new connectors. This process is legitimate, but it can have bad consequences when too much re-ground plastic is used, because it lowers combustion rating. If the connector body has yellowing or foggy plastic, it means that low-quality plastic was used in its making. Another thing manufacturers have been doing with connectors is to replace the nickel and gold parts on the metal contact with “gold flash” or “selective plating” - materials that corrode quickly.

Substituting jacket material: Manufacturers replace CMP and CMR flammability ratings with inferior non-fireproof jacket material. Not every application requires these standards, but when they are needed it is critical for cables to have them.

In summary, Beyondtech advises, “If you want to avoid buying non-legitimate cables, you have to make sure to: buy cables from a legitimate manufacturer; always compare them to good products you have bought before; analyze the jacket’s quality and labeling; carefully observe the box the cables came in; ask where the cable is coming from.”

Couldn’t have said it better ourselves. The full blog is available at beyondtech.us.