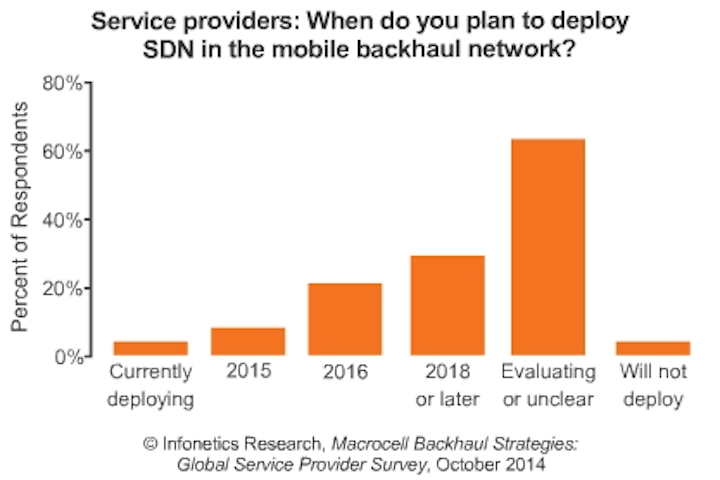 “The mobile network is evolving to incorporate small cells, distributed antenna systems (DAS), remote radio heads (RRHs) and WiFi, and though the macrocell layer still does the heavy lifting when it comes to traffic handling, the backhaul network behind all this is becoming increasingly complex,” notes Richard Webb, directing analyst for mobile backhaul and small cells at Infonetics Research.

Infonetics reports that its survey respondents have yet to scale their small cell deployments, but anticipate they will place over 20% of traffic from the macro network onto small cells by 2018. When asked if or when they will introduce software-defined networking (SDN) into the backhaul network, 29% of respondents say they are deploying or plan to deploy SDN at some point, while the majority (63%) are evaluating it as a possibility with no set timeframe.

Notably, among those surveyed, Ethernet on fiber will reportedly be the most-used technology for macrocell backhaul connections by 2016, followed by Ethernet-only microwave.

Additionally, downstream bandwidth is the top-ranked service-level agreement (SLA) metric, rated "very important" by 92% of operators surveyed, followed by jitter, latency, and upstream bandwidth. Survey respondents also said they "not only seek vendors with strong macrocell backhaul product portfolios, but partners who can also support their strategies for holistic, flexible future-proofed networks," according to the report.

Learn more about the survey.