The following questions for flexible fabric innerduct system specialist MaxCell were fielded and answered as follows by the company's technical support boss. 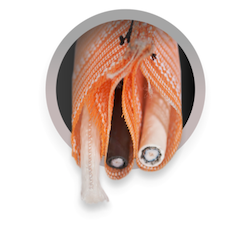 As seen on its website, the following questions to flexible fabric innerduct system specialist MaxCell were fielded and answered as follows by the company's technical support boss.

Can you field splice MaxCell?

The simple answer is no. MaxCell can be repaired in the field if it’s damaged but there isn’t an easy solution to field splicing. If any of you have ever used the repair kit in a field setting you know how arduous a task it is to get the layers aligned. The plastic repair kit will join the two sections together at the seam but doesn’t joint the two pieces of fabric together continuously, so it can’t be used as a splice in a pull situation. MaxCell is spliced in the factory roughly every 600-650 yards. The splice is a sewn lockstitch configuration extending the entire length of the two adjoining pieces in order to go through the folder as one continuous piece.

The next question is could you sew a splice in the field? It has been done, but you need power, a sewing machine, and someone who knows what they are doing to make this happen.

Can you place multiple cables in one cell?

A customer asked the question the other day, if they could place multiple cables inside a single cell. The short answer I gave them was “yes” but the longer answer was that it’s generally not recommended if you want to add or remove single cables in the future. Each cell is a dedicated pathway protecting the cable from coming in contact with other cables and allowing a cable to be removed if needed and replaced with another cable. The question arose from an OSP customer. 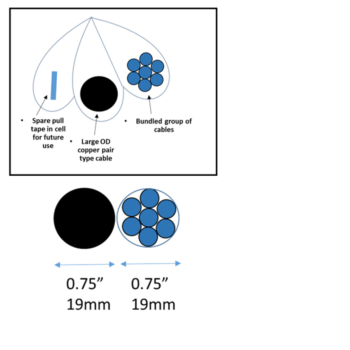 Typically ISP projects will involve bundled cables because they are smaller CAT 5/6 type cables which are typically bundled into a cable tray or J-hook. If a customer wants to bundle a group of cables then the group needs to be treated like a single cable for calculating fill ratio. Take the picture at left for reference. The large single cable and the bundled cables are practically the same size when the cables are bundled together. If you draw a circle around the bundle then you get a better idea of the overall volume being displaced by the bundle.

Will MaxCell survive in nuclear waste?

We've never actually got that question but have received some far out “how will MaxCell perform in X” questions. Truth is it’s impossible to test a product under every conceivable condition.

The main components of MaxCell, Polyester and Nylon, are used in a variety of geotextile applications because of their resistance properties. The combination provides excellent tenacity, abrasion and temperature resistance when exposed to most “typical” reagents found in underground applications. These include petroleum, jet fuel, diesel, natural gas etc.

In addition, some non-typical soil regents have been tested with positive results including detergents, hydrogen peroxide, transmission fluid, and so on. Our point is giving a longevity rate when exposed to any reagent or component is hard to predict because there are too many variables e.g. exposure rate, temperature, etc. but the product is engineered for toughness in most environments.

UV is one of the only true killers of tensile and other properties that make up MaxCell but there are uncommon harsher substances out there that will break it down in high concentrations. It should be noted though that HDPE is much less resistant to these.