Reducing the cost of extending Power over Ethernet 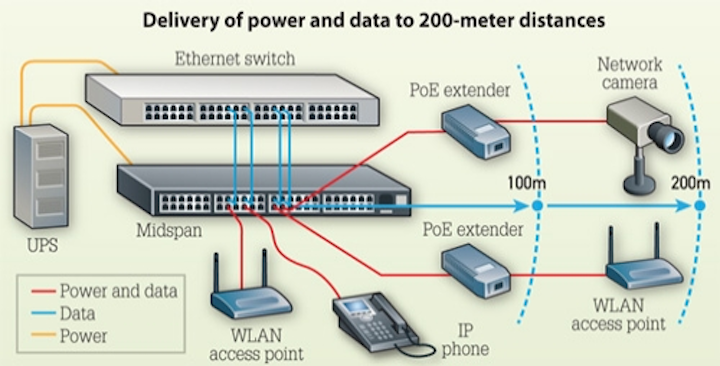 From the May, 2012 Issue of Cabling Installation & Maintenance Magazine

Power over Ethernet (PoE) continues to draw interest from network cabling system professionals, enabling them to deliver both power and data over the existing Ethernet cabling in a unified infrastructure that is easier to expand, upgrade and maintain. The latest PoE advancements offer new opportunities to further reduce power consumption and associated energy costs, while extending the distance that powered devices (PDs) can be placed from the data and power source. The choice of PoE extension technology can have a significant impact on cost and powering capabilities.

Ethernet standards limit data delivery to 100 meters (m) from the switch (typically located in the communication room) and any device connected to it, such as an Internet Protocol (IP) phone or IP camera. Data integrity cannot be guaranteed beyond this distance. If, for example, a company wishes to add a camera to monitor the parking lot, it would need to build another communication room or install a switch every 100 m, which can be expensive.

There are several techniques for increasing reach. The first is to use extender technology with traditional PoE solutions that feature a single power interface and transmit power and data over only two pairs of cabling. The extender is connected to the power sourcing equipment (PSE) and powered via the PoE input. The drawback of this two-pair powering approach is that the resulting PoE solution can then only support 10/100 Ethernet data applications—four-pair powering is required to support the gigabit data rates of PDs such as pan/tilt/zoom (PTZ) cameras, 802.11n access points, thin clients, WiMax transceivers and video phones.

The second approach is to implement xDSL (Digital Subscriber Line) or fiber cabling between the PSE and PD, but this extends reach for data transmission only, not power. A third approach is to deploy a combination of fiber and copper between the PSE and PD, which achieves the desired goal of transmitting both power and data over longer distances, at a significant expense.

A different approach is to use PoE extender technology with the latest four-pair powering techniques. While the original, low-power IEEE 802.3af PoE standard used only two of the four pairs of wires in the Category 5 cable, the latest PoE standards use all four pairs in a cable, which doubles power deliver to 60W. Four-pair powering also improves efficiency compared to earlier two-pair solutions, which is the key to cost-effectively optimizing PoE’s reach.

The latest four-pair PoE technology reduces power dissipation and increases the distance over which PoE can be used by as much as 60 percent—and even longer using new PoE extender technology. The combination of PoE extenders with four-pair powering maximizes reach at the lowest possible cost.

First, extender devices enable network administrators to deliver both data and power to network devices such as wireless local area network (WLAN) access points and network cameras at baseline distances of 200 m, which is 100 m more than IEEE specifications. The table on this page shows the resulting baseline distance extensions. Extenders can also be cascaded to span even longer distances.

On top of that, the four-pair powering architecture reduces resistance and minimizes power losses on the cable, which maximizes power delivery over longer ranges, using standard cable. Type 1 devices can assume the same legacy cabling infrastructure that was the minimum requirement for IEEE 802.3af-2003, which was Category 3. So if Type 1 devices are used with worst-case Category 5 cables, the cables could actually be 60 percent longer. The resistance of 480 feet of Category 5 cable is the equivalent to that of 333 feet of Category 3.

For Type 2 devices, there is still a lot of flexibility when assuming worst-case Category 5 cabling infrastructure. As long as the input voltage to a PD is 37V or higher, and the current is below 600 mA, the PD will work with cables longer than 300 feet, and the PSE will not behave any differently. This is because the PSE monitors, by default, the load of the cable and considers the PD to be a single entity. As long as a PD consumes no more than 22.8W, a 480-foot cable can be used.

When four-pair powering is used with a PoE-powered extender that has the lowest possible power dissipation, less power is wasted regenerating data, which means more power reaches the other side of the connection. The PoE extender can send power over two pairs and receive power over all four. Even longer distances are possible by daisy-chaining more extenders. Additionally, the combination of PoE extenders with four-pair powering ensures that power can be transmitted at the higher, 60W IEEE 802.3at levels across these same 200 m distances, while supporting gigabit speeds that are necessary for HD network cameras, 802.11n WLAN access points and other PDs. This extends PoE’s benefits to devices such as outdoor IP cameras with motors and/or heaters, or access-control systems (which, with a controller, reader and multiple door locks, can consume as much as 45W of power).

Four-pair powering with PoE extenders is also easier and less expensive to deploy than alternative approaches. It only takes one extender to reach 200 m distances, compared to the two required with many solutions based on xDSL and optical technologies, and there is no need for specialty optical and high-gauge copper cables.

As the table that appears later in this article indicates, four-pair powering with PoE extender technology provides an optimal combination of long reach and low cost for delivering both gigabit data speed and up to 60W of power.

With an extension solution in place, users can maximize PoE cost and deployment benefits. One of the more attractive features of PoE is the ability to provide power and data to the PD over a single 8-pin, 8-contact (RJ-45) connector, eliminating the need for a local alternating current (AC) outlet in order to install wireless access points, video surveillance cameras, access control systems and other PDs wherever they are needed—even in difficult-to-reach locations. PoE extension technology increases the distance these PDs can be placed from the data and power source, while still maintaining high levels of power efficiency and data integrity. In other words, PDs can be deployed in the best place for their use, not the closest place to a power outlet.

The most cost-effective way to deploy PoE is by using systems called midspans that are installed between an existing non-PoE switch and the network PDs. Midspans are more economical and enable a more scalable network than is possible with switches that incorporate embedded PoE functionality. Midspans also feature a variety of unique capabilities including remote PD monitoring and configuration, which significantly reduces power consumption while simplifying maintenance. Midspans enable network administrators to monitor per-port and total power consumption, and configure PDs for instant and schedule port on/off functions, as well as UPS status port on/off functions. Other midspan options that enhance flexibility include the ability to use DC inputs with external power supplies for incremental power capacity or redundancy, and flexible powering from AC, DC or another midspan.

Another benefit of midspans is that, when they are interconnected, they can be used to back each other up. Power backup is an important feature for cabling system professionals. If a PD is plugged into an AC outlet and the power goes out, the device power is lost. If there is no UPS, all PDs lose power. With PoE, however, all devices are supported using a centralized power architecture, and all are backed up. For example, a single UPS can be used to back up a PoE midspan serving 20 IP cameras on a network. Without the PoE midspan, 20 UPS systems would be needed.

In addition, if a managed PoE midspan is used concurrently with a managed UPS, those devices can communicate and enable users to predefine the highest-priority devices that should continue to operate when power fails. For example, a user can define that if the UPS battery level drops below 50 percent, the PoE midspan will turn off power to the WLAN access points while continuing to deliver power to the more mission-critical IP cameras connected to the midspan.

PoE is now moving to even higher power-delivery capabilities, using the same foundational four-pair powering techniques. The HDBase-T Alliance developed a 95W power specification to the HDBase-T standard that allows the transport of uncompressed high-bandwidth multimedia content, 100Base-T Ethernet, power and various control signals through a single LAN cable. The power component of HDBase-T is dubbed power-over-HDBase-T (PoH), which is based on the widely adopted IEEE 802.3at-2009 PoE Plus standard.

As PoE achieves higher power delivery over longer distances, it also continues to provide the benefits of a unified power and data structure that is optimized for flexibility, scalability, energy efficiency, reliability and simplified remote management and maintenance. The combination of four-pair powering and extender technology provides the optimum solution for extending reach. It reduces both capital and operating expenses through lower total cost and reduced power dissipation at the PSE, while simultaneously increasing total power delivered to the PD.

Sani Ronen is director of marketing and Daniel Feldman is vice president of business development in Microsemi Corporation’s www.microsemi.com Analog Mixed Signal Group. For more information on HDBase-T and PoH, see the next article in this issue.