Undersea data cables are warming up the Cold War 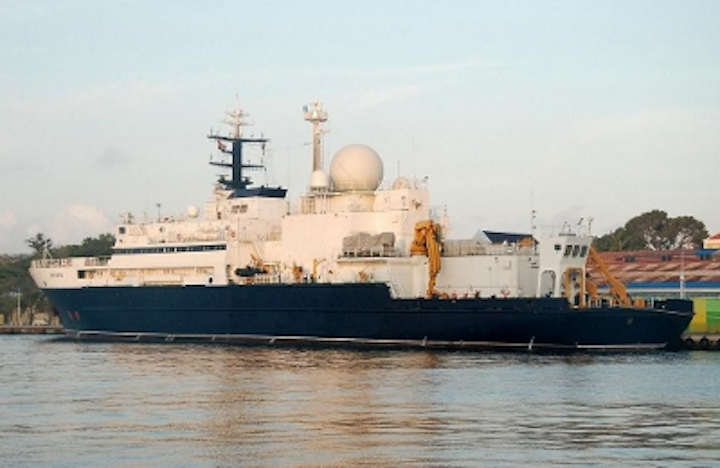 As first reported on October 25 by the New York Times’ David E. Sanger and Eric Schmitt, and picked up by countless news agencies since then, the presence of Russian ships and submarines near data cables beneath several oceans and seas has United States intelligence officials paying close attention.

Sanger and Schmitt reported, “The ultimate Russian hack of the United States could involve severing the fiber-optic cables at some of their hardest-to-access locations to halt the instant communications on which the West’s governments, economies and citizens have grown dependent.” The duo of reporters detail U.S. intelligence’s significant concerns about the possibility. They added, “What worries Pentagon planners most is that the Russians appear to be looking for vulnerabilities at much greater depths, where the cables are hard to monitor and breaks are hard to find and repair.”

The Times story mentions the vessel Yantar (pictured above), which Russia says is used for scientific exploration. The photo, which appears on the Twitter page @7FBTK, shows the Yantar docked at Curacao in September. The @7FBTK Twitter account is associated with the 7 Feet Beneath the Keel blog.

Mashable’s Colin Daileda picked up on the New York Times’ reporting and added some perspective, stating, “Americans need not worry too much, experts said, since most of the U.S. Internet infrastructure relies on continental networks, and so a single attack on the underwater cables wouldn’t have much of an impact at all.”

Daileda quotes Akamai Technologies’ senior director of industry and data intelligence David Belson as saying, “It’s not going to impact your ability to watch Netflix at night when you get home.”

Thanks, guys. Glad we have our priorities in order.