While there is not a shortage of FEP, supplies to cable manufacturers are being allocated. 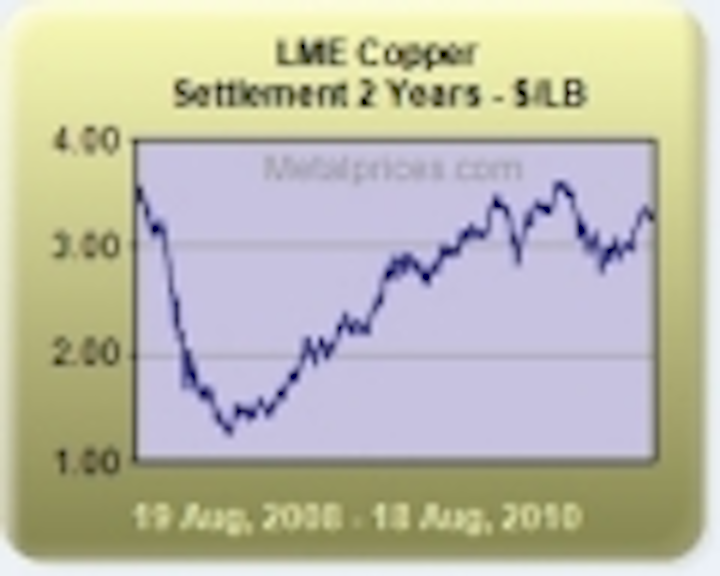 The steady rise in copper prices over the past 24 months, coupled with recent changes in the FEP supply available to cable manufacturers, could soon drive up the price of UTP cable as well as other twisted-pair cable constructions.

The graph shown here, taken from the website metalprices.com, marks the steadily upward price trend for copper that has occurred since the bottom fell out of the world economy two years ago.

A more recent turn of events affecting the supply of fluorinated ethylene propylene - FEP - is likely to have a greater impact on the cost to cable manufacturers of producing twisted-pair cable and quite possibly the cost to consumers that buy it. Dyneon, one of three suppliers of FEP to cable manufacturers, announced it is exiting the FEP business early next year. That will leave Daikin and Dupont as the two FEP suppliers to the cable industry.

Overall, fluorine-based products including FEP have risen in price throughout 2010. All three FEP suppliers have already increased the prices they charge cable manufacturers for the material and have suggested that another price increase is looming. They also have limited or allocated the supply of FEP to cable manufacturers, although no cable manufacturer has stated that they either currently have or foresee an FEP shortage that would delay their production of cable like the industry experienced about 15 years ago.

Still, signs point to the likelihood of a price increase.