A Customers Perspective on Training 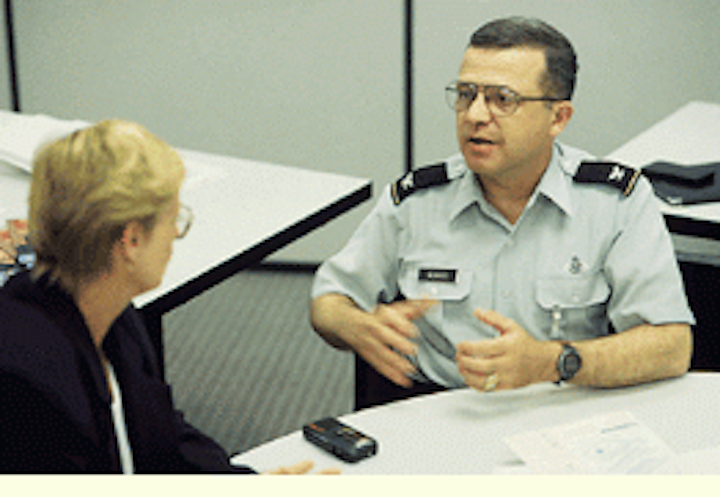 At the Academy, two groups are involved in the planning process for major infrastructure and cabling renovations: the housing and public works (Dhpw) and the information management groups. They have already replaced the manholes and conduit system for the outside-cable renovations (known as Oscar) and have started the renovations on the first of eight barracks.

"One-half of the class are the Dhpw folks and the other half are the telecommunications, information and instructional people who work for me," says Monaco. "The Dhpw people know electricity and power, and my information group knows the telecommunications side of things, so that`s a good marriage. The installers--Army people--come up from Forth Richie, MD. What we need is agreement from everyone concerned as to what`s important. We hope this design training will get everyone on the same sheet of music."

A staff member from Monaco`s group had attended a similar course and recommended it. The Colonel decided to bring the course to West Point to get the different groups talking from the same standard set of instructions.

"I`m impressed with the quality of the instruction. And I think it was good to bring the instructors here because the people here are too valuable to let them all go away at the same time. Now we have them in the same room discussing the issues. In fact, I`m interested in the follow-up standards course.

As chief information officer at West Point, Monaco heads a department that provides support for all the information services, including telecommunications, television, audiovisual, electronic mail and distribution, printing and publication. The department is responsible for the entire campus network, which is Category 5 unshielded twisted-pair cable now, with a fiber-optic cable backbone in place.

"We did a cost/benefit analysis and fiber wasn`t much more expensive [than copper] to put in because we`re just paying for the fiber plant. It`s `dark` right now, but it`s there for our future use. We also decided to bring fiber to the pillow--to every barracks."

The reason for the campus network renovation is obvious: The infrastructure is old. Since 1802, the Academy has operated at the historic site of the oldest continuously occupied U.S. military post. Now, cadets have laptops and PCs in their rooms, with access to the World Wide Web. With a 6600-user network, approximately 75,000 e-mail messages pass across the network each day.

"We`re trying to develop technology-enabled leaders and expose them to some of the newest technology for when they graduate into the real world. The Army is increasingly moving from the industrial age to the information age and the Academy is where we build leaders for the Army," says Monaco.