Cable-tray systems comprise sections and associated fittings that form a rigid structural distribution system to support cabling within a building. Cable trays are often preferred to conduit and raceway systems because of their accessibility and ability to accommodate change. Changing cables is easy because cables can enter or exit the trays at any point in the system. The open construction lets you see if there is enough capacity left for additional cable and also facilitates inspection of the 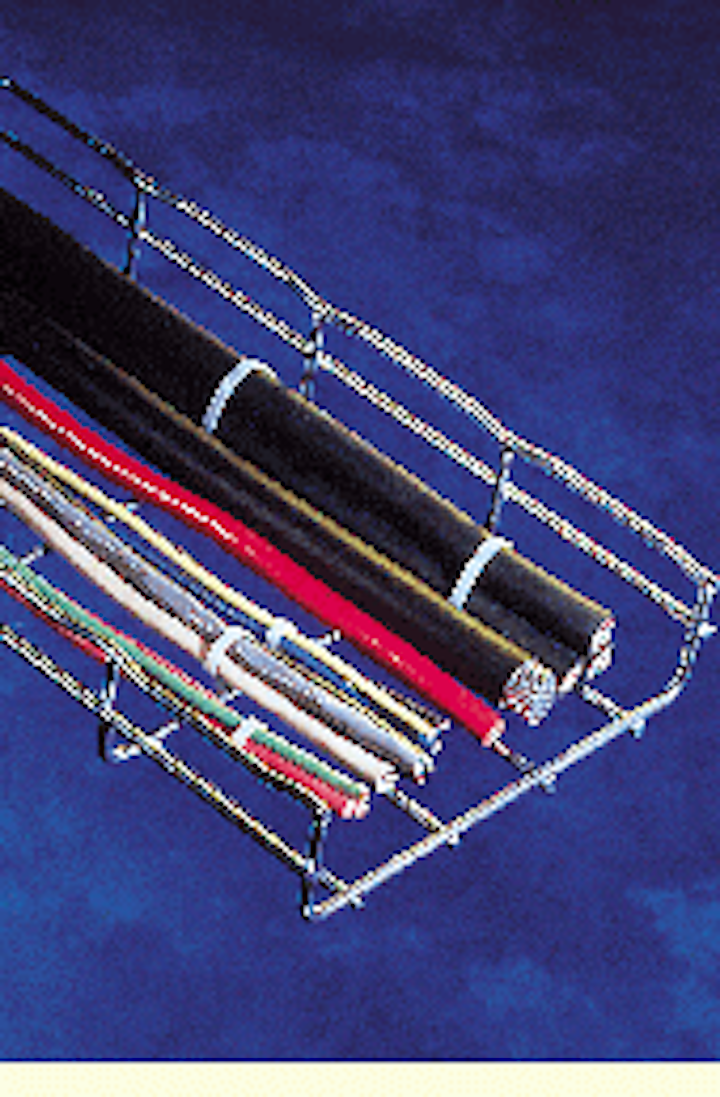 Cable-tray systems comprise sections and associated fittings that form a rigid structural distribution system to support cabling within a building. Cable trays are often preferred to conduit and raceway systems because of their accessibility and ability to accommodate change. Changing cables is easy because cables can enter or exit the trays at any point in the system. The open construction lets you see if there is enough capacity left for additional cable and also facilitates inspection of the cable and cable trays.

The difference between cable trays and raceways, according to Frank Casteel, vice president at Mono-Systems Inc. (Rye Brook, IL), is that "raceways are generally mounted on a wall in a room where power and communications cables are terminated. Cable trays are usually overhead or under raised floors but the wiring is open. They are used to distribute cables from the source to the point of use. There is no facility, however, to terminate the cable inside the tray."

The basic types of cable trays available are channel, ladder, solid-bottom and trough. Other versions of these basic designs include single-spline and open-mesh construction. The engineer or designer will usually specify the type of cable tray that has the features to suit the project. "It depends on the situation and the environment," says Jay Burke, project manager at Sullivan & McLaughlin Communications Group Inc. (Quincy, MA). "For example, for larger bundles or heavier cables, I would recommend a ladder tray."

The ladder cable tray has two side rails connected by cross members, or rungs. This type of cable tray is effective because the ladder rungs give you easy accessibility to the cables, from the top or bottom. The rungs also provide convenient anchors for tying down the cables.

Kevin Smith, project coordinator at MTS Services (Bedford, NH), agrees that "typically, cable trays are going to be in an environment where changes are happening all the time. The ladder type would go either in a main or intermediate distribution frame closet or above a ceiling, because that`s more permanent."

For fiber-optic cable installations where drooping of cables may affect system performance, solid-bottom (non-ventilated) cable trays are preferred. However, the main reason for selecting solid-bottom trays is the concern for electromagnetic/ radio-frequency interference protection, or for sensitive circuitry. In addition, local building codes may require enclosed cable-tray systems under certain conditions. The designer, therefore, may choose solid-bottom cable trays, usually with covers, to provide shielding.

The decision to use cable trays is dependent on the project. Where building codes permit telecommunications cables to be placed in suspended ceiling spaces without conduit, these pathways usually consist of cable trays. Another method used for routing equipment cable to the crossconnect is under a raised floor.

"In a dropped ceiling or under a raised floor, in many cases, is classified as plenum air space," says Sandy McWilliams, manager for fiber-optic products at ADC Telecommunications (Minneapolis, MN). "In a plenum space, it is important to use a plenum-rated cable-tray system. Also, installers have to comply with building codes, which dictate the cable type to be used in an open or closed plenum cable-tray system."

Overhead or under raised floor

Overhead cable trays are the most common for routing equipment cable to the crossconnect in large equipment rooms. They may also carry backbone cables to the backbone path. Cables should not be allowed to rest directly on ceiling panels and must be suspended from or attached to the structural ceiling or walls with hardware specifically designed to support their weight. When you install the cable trays, be sure to coordinate the tray locations with lighting, air-handling and fire-extinguishing systems so that the trays will not obstruct these operations. Leave sufficient space to permit adequate access for installing and maintaining the cables.

Some advantages of a ceiling cable-tray system are that it provides a flexible way to distribute cables to workstations, cable lengths can be kept to a minimum, and cabling can be easily changed or added, with minimum disruption to tenants. The disadvantages are that ceiling systems are inaccessible over plaster or spline ceilings or sealed air plenums, and the cables may pick up noise interference from electrical fixtures or wiring.

When the equipment room serves both computer and telecommunications equipment, you might use an under-floor cable-tray system. With this type of system, you should ensure that you avoid cable congestion, provide enough cable slack and allow for access to the cables.

"We would not recommend cable trays for under-floor use because you`re not really providing any protection for the cable," says Smith. "And for fiber-optic cable, we prefer to enclose it in innerduct."

However, some manufacturers recommend that fiber-optic cable should be run in cable trays to avoid tension, crushing and bending. "The most important issue is to ensure that the bend radius for the fiber-optic cable is maintained within the standards," says McWilliams. "What we recommend is that you manage fiber-optic cables separately because of the crush loads of the heavier copper cables."

Design specifications usually define the width, load depth and rung spacing (if ladder-type) of the cable tray to be used. The width or height of a cable tray is a function of the number, size, spacing and weight of the cables in the tray.

Trays are available in widths from 2 to 42 inches. It is important to remember, however, that the load rating does not change as the width increases--even with six times the volume, a 36-inch wide tray cannot hold any more weight than a 6-inch-wide tray. "Typically, the most common cable tray used," says Casteel, "is 12 inches wide, 4 inches deep with 9-inch rung spacing."

Trays are also available in different heights and, if the load rate permits, cable can be piled deeper in the tray. According to ADC`s McWilliams, however, "you want to minimize the height and maximize the width, so you don`t get cable buildup problems. The size is more a question of how many fiber-optic cables you want to put into the tray."

The material composition of the cable tray also depends on the installation environment, however, most trays are made from a corrosion-resistant metal, such as steel or aluminum. The most commonly used is aluminum because it is lightweight.

"We would choose aluminum or steel because of strength and code, depending on the environment," says Burke. "It`s nice if you have to do any grounding; you just ground the nearest section of the cable tray and that keeps the continuous ground."

Electrical codes in many cities require the use of cable trays and hardware to be classified by a third party testing laboratory (such as Underwriters Laboratories) as to suitability as equipment grounding conductors.

When all these cable tray features have been specified, you are ready to install the system. "The most important feature we look for is ease of installation," says Smith. "For example, the product line should include all the accessories you need. The worst thing that can happen is that you get on a job site and you`re missing one key part. We`ve run into that on a couple of jobs and then we had to run down to the local hardware story to find a workable substitute."

This cable tray with open-mesh construction allows loading from side or center.

The following are examples of features that you should look for in cable trays. The trays should

-Have side rails or equivalent structural members

-Not have sharp edges, burrs or projections that may damage the insulation or jackets of the wiring

-Be made of corrosion-resistant material or, if made of metal, be adequately protected against corrosion

- If nonmetallic, be made of flame-retardant material.

[Editor`s note: This is a synopsis of Article 318-5 of the National Electrical Code and is not intended as a substitute for a thorough reading of the NEC.]