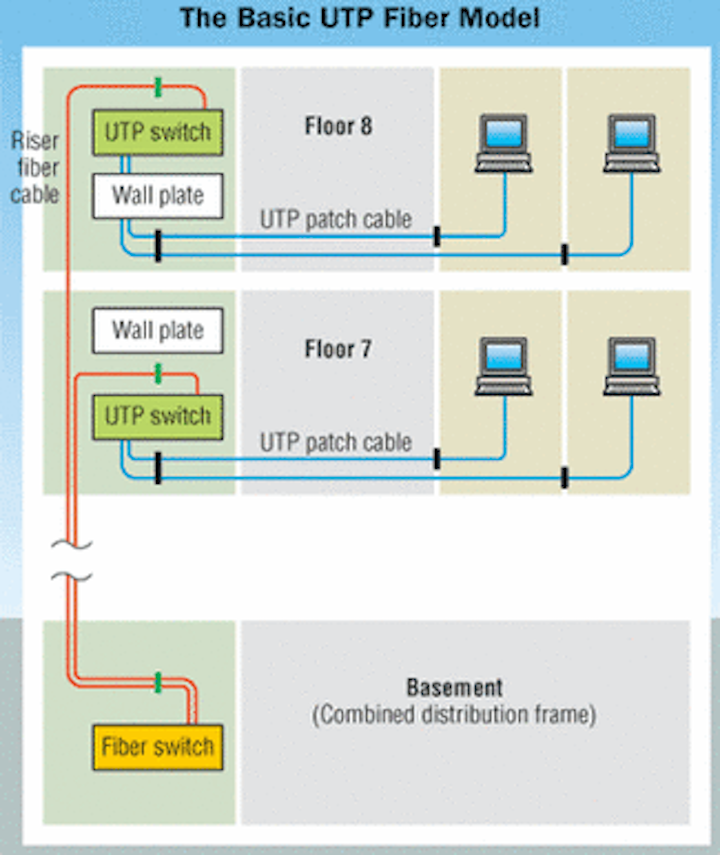 For many scenarios, there is little or no difference in the cost between installing new grades of UTP copper cable and fiber cable. Can't believe it? The long-term benefits of fiber cable-higher bandwidth, ease of scalability, and lower maintenance-and lower installed first costs make fiber in the horizontal a compelling choice.

In recent years, many advances have made all-fiber networks much less costly than they once were. The "installed first costs" have long been a major factor driving the choice of the cabling medium used in the LAN horizontal subsystem. Frequently, these costs become the reason users choose to deploy UTP copper to the desktop instead of optical fiber. But reduced cable costs, the use of centralized optical-fiber cabling, and the availability of small-form-factor (SFF) connectors and media converters all bring down the cost of all-fiber networks.

To help customers make an educated choice about cabling options, Pearson Technologies and members of TIA's Fiber Optics LAN Section (FOLS; www.fols.org) developed a series of scenarios and an interactive cost model (which can be found on the FOLS Web site). Together, these tools compare the cost of a horizontal-UTP/vertical-fiber network to the cost of an all-fiber network that runs to the desk-also called fiber-to-the-desk or centralized optical-fiber cabling.

The model is highly flexible, allowing input of appropriate values into the scenarios for comparisons and cost estimates. The assumptions and values in the posted model represent generic values, which are believed to be realistic, and not necessarily median values, since the user may enter the values appropriate to each situation.

In the scenarios, the most important recurring major difference between the UTP and fiber networks is the cost of building a telecommunications room (TR), and the cost of the related electronics and support equipment. While the TR is a necessary cost factor in the UTP model, the TR and related equipment in a fiber system can be eliminated, or at least vastly reduced in size and cost, by locating the electronics in a single, centralized equipment room. Fiber enables this type of architecture because multimode fiber can support cabling runs of 300 meters or longer for most applications.

Basic model conditions
The model compares the cost of a horizontal-UTP/vertical-fiber network to the cost of a centralized optical-fiber network. Fiber is used in the vertical riser for both network scenarios, as it is widely recognized as cost-effective in the backbone. In the horizontal, the UTP network model uses Category 5 cable. In the fiber model, either 62.5/125-µm or 50/125-µm multimode fiber can be used. The costs are similar, so the model applies for either fiber type. Both network models use an average length of 150 feet for the horizontal portion of the run.

The "building" used in the model is an eight-story building with 48 ports per floor. To make the analysis unbiased toward a specific medium, costs are calculated on a per-port basis. This analysis applies equally well to scenarios with a multiple of eight floors, or multiples of 48 ports/floor. For port counts less than multiples of 48, the analysis shows that an all-fiber system will generally cost less than a UTP system, because the UTP switch-port utilization may drop below the 70% value. Unused, or idle, ports are expensive as the electronics represent the greatest cost of any structured cabling system. With centralized optical-fiber cabling, port utilization can be aggregated from multiple locations (i.e., floors), resulting in fewer idle ports.

This model compares only first installed costs, not the cost of testing or long-term maintenance. In both of these areas, however, centralized optical-fiber-based networks are less expensive.

TR and support costs
The major cost difference between the two scenarios is in the cost of the TRs, even if the UTP space is only 6'x10' (as used in this model, and less than reported in a recent report by The Tolly Group and information from the National Institutes of Health). In the all-fiber model, the TR on each floor could easily be reduced to half the size of the room required for the UTP installation, as the room still needs to accommodate the telephone connections.

Accordingly, each TR in a UTP horizontal network is estimated to cost $20,000. This number is based on the following calculations, and is very conservative according to the Tolly Group report, which shows total TR costs that exceed $30,000:

Cost scenarios
Nine different scenarios were developed to cover a wide range of typical situations. From these scenarios, a number of preliminary conclusions can be drawn. The results of each scenario can be viewed online and downloaded from www.fols.org. In several cases, product list prices are used, as these numbers generally are easy to establish. Other scenarios are included using sample "street prices," calculated as 80% of list. While list prices are a good place to start, the street prices show a more realistic picture, as list price is rarely paid for electronic components purchased in quantity.

The scenarios are based on the input received from customers and training sessions, so they are representative of what network planners are considering. Only electronics pricing from "tier one" (major) suppliers are considered; some cost savings may also be realized from obtaining quotes from smaller suppliers.

SG-compatible equipment
In the first scenario, the UTP model is based on the Cisco Systems 3548 switch in the TR at list price. (For more information on what equipment is covered by the SG designation, please review TIA/EIA-604-7.) This switch is linked via fiber to a Gigabit Ethernet switch in the equipment room. Port utilization is assumed to be 70%.

The fiber model used SG network interface cards (NICs) at list price and the 48-port SG 100Base-FX switch (Model VOL-5000) at list price. The switch is connected to other switches via 3M Gigabit Ethernet modules, and port utilization is assumed to be 90%.

The scenario shows at list price, running fiber in the horizontal is more expensive than running UTP. But at the more realistic street price (80% of list price), fiber provides a $9,800 cost savings compared to UTP. Additionally, the fiber network will also likely have a longer useful life than a UTP network. And since it would cost at least $100/port to upgrade a UTP system to an all-fiber system, network planners should take this potential future cost into consideration.

The next UTP scenario uses the same Cisco 3548 switch, at list price, in the TRs. The switch is linked via fiber to a Gigabit Ethernet switch in the equipment room, and port utilization is assumed to be 70%.

The all-fiber cost model is based on a generic 100Base-FX NIC in each computer, with a Cisco 4000 switch in the equipment room in one of Cisco's recommended configurations. Again, port utilization is assumed to be 90%. Horizontal fiber cable cost in this model is calculated as $0.35/fiber/meter for two fibers. Vertical fiber cable cost is calculated as 98.4 feet at $0.35/fiber/meter for two fibers.

In this scenario, the all-fiber system is more expensive than UTP, due to the high cost of 100Base-FX NICs and the high cost of the Cisco 4000 series equipment. The single greatest factor that drives up the installed first cost for the fiber-based solution is the price of the Cisco fiber blade (Catalyst 4000 FE Switching Module), with a list price of $9,999 for 24 ports. This is roughly double the cost of 100Base-FX NICs, which are in the range of $180 to $220 each.

Using tier-one electronics, fiber only reaches cost parity with the UTP solution if you can purchase the Cisco fiber blade at 50% of list price.

The first UTP scenario used a 48-port Cisco 3548 10/100 switch at list price in each TR with a Gigabit Ethernet link to the equipment room. Port utilization is assumed to be at 70%.

In this scenario, the installed first cost of the all-fiber system is slightly less expensive than UTP-$806.47/port compared to $822.72/port. This conclusion is consistent with other scenarios as long as the TR support costs do not exceed the $780/TR estimated in the model.

Using a street price, the fiber-based solution becomes significantly less expensive than UTP, saving $24,359. This conclusion is consistent with other scenarios as long as the TR support equipment cost is within the $3,045/TR cost of the projected values in the spreadsheet.

Even when port utilization for the UTP design is raised to 78%, the fiber-based system is essentially at cost parity with copper, running $806.47/port versus $804.57/port for UTP.

SG-compatible 100Base-SX
The 100Base-SX standard (TIA/EIA-785) was developed as a 300-meter, low-cost 10/100-Mbit/sec short wavelength Ethernet solution, as opposed to the older and more expensive 100Base-FX long-wavelength, 100-Mbit/sec-only standard. This new standard was ratified in 2001 and is now being used by network planners. While much of the standards-compatible equipment is still in its initial stages or under development, 100Base-SX NICS and media converters are expected to cost only 50% of 100Base-FX products.

In the model, it is shown that in the future, the cost of centralized optical-fiber networks can be significantly reduced if users implement both the SG SFF connector and the less-expensive 100Base-SX technology. In this scenario, it is projected that a fiber-based solution is about 10% less expensive than Category 5 UTP, for a total cost reduction of $32,787.

When to use fiber
A comparison of installed first costs shows that fiber offers a cost-effective solution for horizontal cabling applications in a variety of scenarios. In fact, fiber offers considerable initial savings, considering installed first costs alone. The savings only increase over the life of the network, as companies enjoy the benefits of lower maintenance costs and are able to upgrade their networks without recabling.

It is critical that network planners examine their alternatives from both cost and performance perspectives when evaluating infrastructure choices. The models demonstrate some of the advantages that may be achieved by using centralized optical-fiber cabling to leverage the high bandwidth and low attenuation of fiber. The Fiber Optics LAN Section's online interactive model describes scenarios that take advantage of small-form-factor connectors, media converters, and 100Base-SX-compatible equipment. It is important for network planners to note that the difference between "list prices" and "street prices" can bring fiber cost down to parity with copper for first installed costs-and a reduced total cost of lifetime ownership.