Implementing a new cable management system is like running a marathon; although the University of Michigan has not yet crossed the finish line, perseverance and dedication will help them win the race. 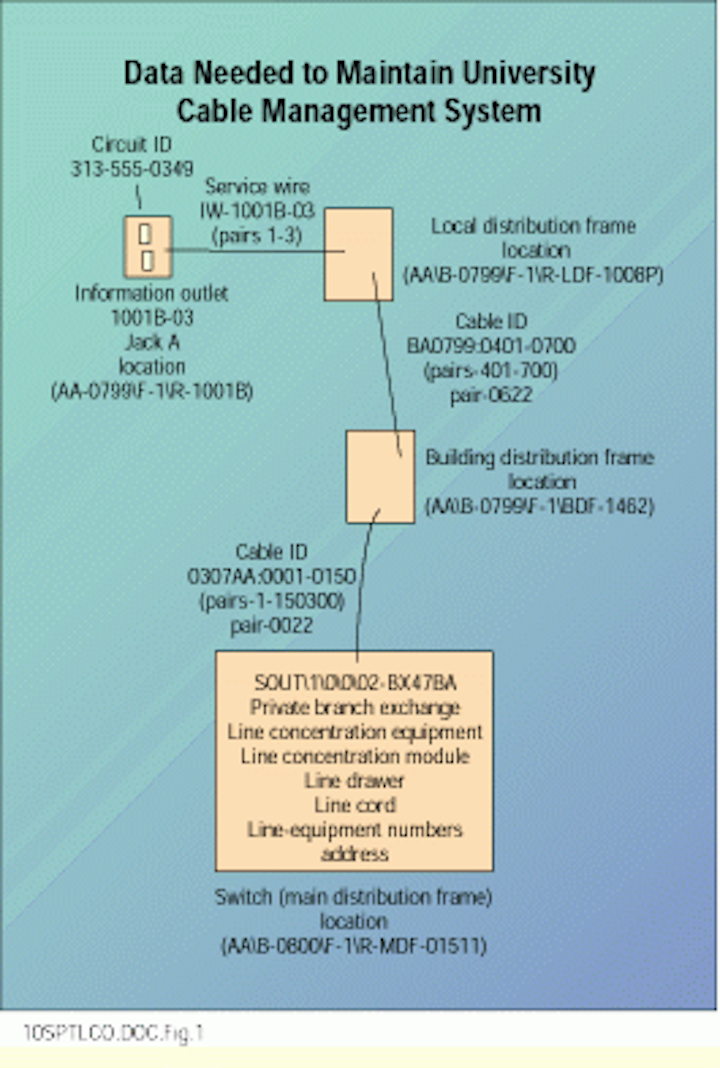 Implementing a new cable management system is like running a marathon; although the University of Michigan has not yet crossed the finish line, perseverance and dedication will help them win the race.

The University of Michigan (Ann Arbor, MI) had driven its mainframe telemanagement system as far as it could. With more than 800 work orders issued each month, the upkeep of supplemental databases and paper records, and the desire to maintain a technological advantage, the university looked for a comprehensive solution that would meet end-users` needs for voice and data service. Although the old system had served the university well, it was time to trade it in.

On the data side, the university staff manages more than 30,000 data circuits and 1000 hubs. Some of the services provided by the university include voice (analog, digital and Centrex), Integrated Services Digital Network (Isdn), 10-Mbit/sec Ethernet, 4- and 16-Mbit/sec token ring, Internet access, videoconferencing and broadcast television.

The information that the university plans to maintain in its new cable management system (CMS) includes the following:

With these telecommunications needs growing daily, the university began the vendor selection process by sending out 30 requests-for-information. The project team listened to 11 product demonstrations from more than 20 salespeople. Two months later, the university sent out requests-for-proposals (RFPs) to 10 vendors. After reviewing the four finalists` demonstrations, it chose TRU Server software from Telco Research Corp.

This software, which is a client/server-based telemanagement and premises-wiring administration system, automates voice and data communications management. Users on the client stations have access to work orders, inventory administration, problem tracking and cost allocation.

"We wanted a single point of entry into an integrated system, and the ability to make global changes (for example, room number) instead of having to tear down and rebuild all the cables," says Madeline Halloway, telecommunications supervisor at the university. "Also, with most of the other vendors, most RFP questions were answered with `custom solution` in their responses. We did not want a proprietary system that would tie us to programming changes for every new item we needed to track."

TRU Server`s open architecture also appealed to the university. "Being Odbc-compliant [open-database connectivity] was a deciding factor," he continues. "We wanted to be able to use some standard market interfaces for accessing our data and to create links to some of our current administrative systems written in Oracle."

With vendor selection complete, the next challenge moved to a personal level. The university carefully defined the mix of skills and knowledge needed to begin implementing the system and decided that the following personnel were critical for successful implementation:

- Mainframe programmer (for converting existing data from a mainframe system)

- Systems analyst for each module

The first goal for this group was to develop an achievable schedule -- which can be as arduous as the actual implementation. "Most important, you need to establish a realistic implementation schedule," advises Halloway. "Create a Gantt chart for the pilot and production, and follow its details. It is also imperative to get the support from management for the project schedule."

Once the schedule was established, the next step was to decide what information to maintain in the cable management system. Meetings were held, with the various groups offering suggestions for their different needs. Management needed capacity reports to plan for future cable expenses; technicians needed to know which closet provided services to the various rooms; and customer representatives needed to know if a jack already existed in a room, before starting a work order. "The process was quite involved because everyone tends to have a different opinion about what is important," says Halloway.

Presented with a system that was flexible enough to track data at different levels, the university decided that once the data was entered into the system, it had to be maintained.

Initially, the group considered tracking every crossconnect down to the pin level. As the discussions progressed, however, it decided to omit tracking crossconnects. The university decided to track information from the main distribution frame to the riser cable, to a second riser cable (if applicable), to the service wires, to the jack and finally to the terminating equipment.

After deciding what information to maintain, the next hurdle was how to gather the information to put into the new system. Information-gathering can be such an intimidating task that a project can sometimes fail before it gets started. "The university had volumes of manual cable records on paper, in the mainframe cable management, in Excel spreadsheets, FoxPro databases, computer-aided design drawings and memory," says Jeff Maher, facilities engineer, a key player on the project team. Maher saw this new system as a challenge to make things better. "This was an opportune time to add, delete or change existing information en masse." But he reiterates the "Gigo" warning: Garbage in means garbage out. "Incorrect data is just as inaccurate in a new system as it was in the old."

When Shakespeare wrote, What`s in a name? he did not have to find a specific cable pair in a spaghetti-wire closet. In a CMS, naming is everything. To make things more efficient in the new CMS, the university reevaluated its naming conventions. The ultimate goal of effective naming is to provide information at a glance. "Establish uniform naming and labeling conventions that add value. Apply the keep-it-simple principle whenever possible," Maher advises.

Adhering to this principle, the project team decided to label information outlets to identify the manufacturer and the service that each jack provided. For example, the information outlet T&B 2V-2D-2L represents Thomas & Betts as the manufacturer, 2V jack is voice, 2D is data and 2L is local area network. The technician would then know at a glance the services of each jack.

TRU Server provides the capability to set up multiple location grids -- for example, one for an office building and another for a warehouse. However, the university decided on one location grid made up of campus building floor room. Location AA B-0799 F-1 R-LAB represents Ann Arbor campus, building 0799, floor 1 and the laboratory.

Once the naming conventions were established, the next step was to import existing data into the new CMS. After several meetings with Telco, a standard format for loading the data was agreed upon. This format allowed the university to create input files and then execute programs written by Telco. The conversion programs made all connections and associated terminating equipment with directory records.

Even after the conversions were run, hours were spent reviewing the data. Reconciliation, verification and cleanup of the data became critical to bringing the system up with good data. After the data was imported and reconciled, the university gained fingertip access to the network`s connectivity.

The university is currently running a pilot test to compare the TRU Server with its mainframe system. Using the new system to manage work orders, assets and connectivity have already produced the following benefits: Passing of paper has been reduced, 24-hour online status access is available, more automated dispatch is enacted, and performance has increased with distributed line assigning and work-order entry.

In implementing its integrated CMS enterprise solution, the university has identified the following important items:

- Get a firm commitment from management.

- Establish a partnership with the CMS vendor, and

- Assign the CMS implementation to someone who does not have wisdom, patience and energy.

- Let 15 different groups offer their opinions, with no one responsible for making a decision.

- Don`t set aside time for extensive training. Sit end-users in front of a terminal and say, "Here`s your new system -- go to it."

- Sell the system to the end-users as the ultimate solution that will change their lives forever.

- Assign the job of CMS implementation to an employee, with instructions to get the new system up and running in a few months. Of course, this must be accomplished in addition to the employee`s current workload.

- Convert old CMS databases into a new CMS without cleaning up the old.

- Have upper management select the cable management software package without input from the people who will use the software.

The building and local distribution frames (BDF and LDF) maintain the locations for the terminating cable pairs; for example, cable 0307AA:0001-0150 terminates in the BDF with a location of AA B-0799 F-1 BDF-1462.

From this frame, which shows the connectivity path for telephone number 3135555555, users can disconnect or make new connections as needed.