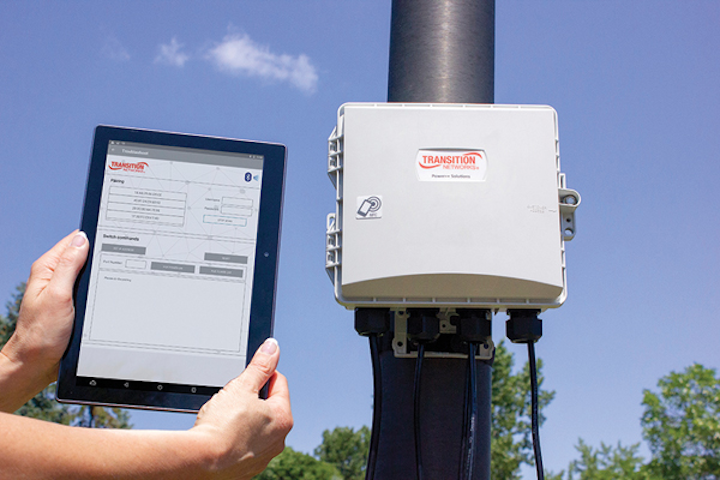 To accommodate a wide range of applications, a network switch used in a smart-city environment must offer several sophisticated features.

An increasing number of cities now have “smart-city” initiatives to provide digital services and enhanced security for their citizens. The networks required to support them are critical to ensuring high performance and overall availability. As a result, network switches are moving further to the network edge and are often deployed in outdoor locations that are hard to access and are exposed to theelements.

Traditional off-the-shelf switches won’t cut it in this application because there are special environmental, management and power requirements that network planners need to factor into their purchasespecifications.

The features of a smart-city switch can allow network planners to deploy advanced security cameras, LED lighting, wireless and Internet of Things (IoT) devices in their networks. But these systems require the network to be highly reliable with advanced management features. For this reason, special consideration should be given to equipment that will be used in outdoor environments to ensure the desired availability and reliability can beachieved.

Here are some of the important features that should be on a checklist for smart cityswitches. 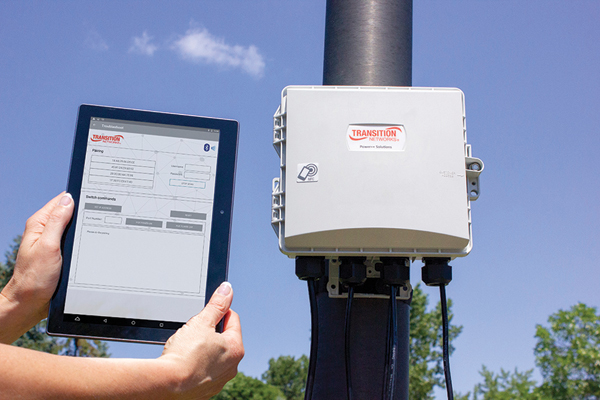 In a smart-city application, networking equipment can be placed in out-of-the-way locations—like this four-port switch mounted to a pole.

Similarly, the National Electrical Manufacturers Association (NEMA) provides definition for rating types of enclosures. Generally, an enclosure that will be used in typical outdoor applications but not submersed in water should be rated NEMA4X.

Underwriters Laboratories (UL) provides standards related to electrical safety. UL 60950 is the specification that is intended to reduce risks of fire, electric shock or injury to anyone who comes in contact with information technology equipment. Part 1 (UL 60950-1) is designed for indoor applications and part 22 (UL 60950-22) is intended for equipment installed in an outdoor location. Both of these are essential for a smart-cityswitch.

PoE requirements—Smart-city networking equipment can be placed in a wide variety of out-of-the-way locations, such as on top of bridges, to be close to security cameras, or on buildings or poles, to be close to wireless equipment. These remote locations typically don’t have easy access to power for all of the attached devices. Without Power over Ethernet (PoE), separate power cabling and equipment would be needed at the remote site. Using PoE to provide power for this equipment is a significant benefit and should be a feature of a smart-cityswitch. 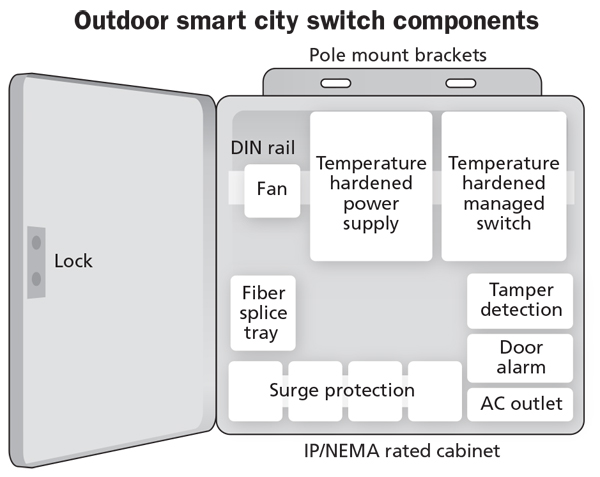 A smart-city switch that will be deployed outdoors must be hardened against extreme temperatures, and housed in a cabinet rated for the environment.

PoE technology first emerged in 2003 to power Voice over IP phones, and has evolved since then to deliver higher wattage, allowing PoE switches to serve more higher-power applications. The recently ratified standard IEEE 802.3bt (PoE++) allows for the delivery of either 60 watts of power (Type 3) or up to 90 watts of power (Type 4). The new standard requires backward compatibility with IEEE 802.3af (delivery of 15.4 watts) and IEEE 802.3at (delivery of 30 watts), so standards-compliant devices will automatically assign the PoE class based on the lowest PoE standard both the power sourcing equipment (PSE) and powered device (PD) can support. Conformance to a common standard is important because it allows communication between the many disparate devices found in smart-citynetworks.

IEEE 802.3bt creates opportunities for new classes of equipment, applications and features. PoE also allows placement of devices in inaccessible locations such as busy traffic intersections or underground parking garages. The availability of the higher power of PoE++ underscores the importance of choosing a smart-city switch that fully supports the standard and not a pre-standard implementation, since standards compliance ensures proper handling of higher PoE power levels and interoperability among variousdevices.

Simplified switch configuration—It takes hundreds or even thousands of switches to blanket a city to establish the connectivity needed for a smart-city application, which makes configuration a challenge. Near-field communication (NFC) technology can offer asolution.

Most people know NFC as the technology that allows them to swipe their phone by a payment terminal in a store to instantly pay for their purchases. In a smart-city switch application, the same concept applies, but instead of transferring payment information the system transfers configurationinformation.

These systems consist of an NFC-enabled device such as a smartphone or tablet (also called the reader) and an NFC antenna (also called the tag) on the switch. When the reader device is within 4 cm of the tag/antenna it will transmit information to the tag, which also draws its power from the electromagnetic field in the reader. Before dispatching to the job site, the switch configuration information can be passed from the reader to the tag using a specially designed app on a mobile device. The tag is essentially a nonvolatile EEPROM (Electrically Erasable Programmable Read Only Memory), so it can store the data without the switch being powered on. When the switch is powered on at the installation site, it reads the tag and the configuration information is transferred into itsmemory.

This enables an install team to configure many switches in a very short time period by simply holding the reader up to each one for just a second. Since many of these installations take place on busy streets, configuring the switches prior to dispatch speeds up configuration, makes the installation safer, and reduces the time traffic is interrupted or streets areblocked.

Managing the network—The ultimate smart-city switch must have robust remote management for both the switch and the powered devices that are connected to it. For the switch itself, an intuitive web-based management system is a good way to monitor the network, respond to alarms and resolve other switchchallenges.

For the powered devices, device management systems (DMS) are becoming a popular way to manage these remotely located systems. DMS is software running in the switch. Using DMS, the network manager can auto-discover PDs and develop a graphical/topology/floor view of devices. DMS also provides auto power reset for automatically restarting attached devices in case of power failures or other glitches. Other available features include power management for conserving and scheduling power, cable diagnostics for troubleshooting cable fault and connection issues, tamper detection, and digital input/output for connecting external switches andsensors.

Ease of onsite troubleshooting—It can be extremely costly to find out some feature in a switch is not operating properly and have to return to the jobsite after an installation has been completed. Remote network management allows access to that switch from the control center, but if remote access is lost and a technician must be dispatched to the site where the switch is installed in an out-of-reach location, debugging and reconfiguring the switch can get expensive and time-consuming.

Smart-city switches equipped with a Bluetooth Low Energy (BLE) radio can facilitate access to the switch from within 100m without having to physically connect to a craft port. Using a mobile management app, the field technician can connect to the switch via BLE and obtain any alarm information or change equipment settings from the ground or even while sitting inside the dispatchvehicle.

This direct switch access reduces downtime and may help avoid costs of a scissor-lift or bucket-truckroll.

The perfect smart-city switch has sophisticated features to accommodate a wide range of applications. Environmental hardening and the latest PoE technology are musts. But the remote locations where these switches are installed make features that simplify management, configuration and troubleshooting important. Looking past traditional switch basics to these important time-saving tools make a smart-city application much more successful.u