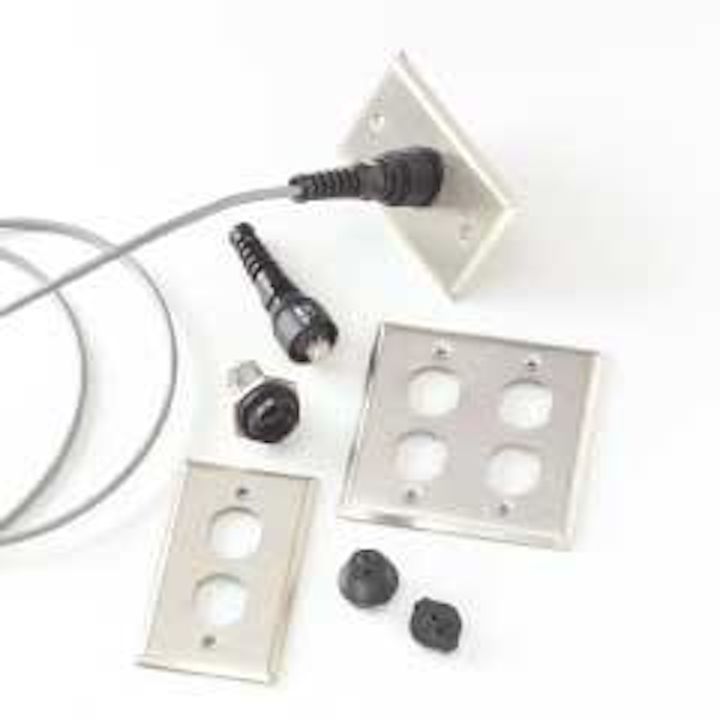 As the market for industrial cabling products grows, manufacturers are introducing cables designed to meet more robust factory floor requirements. These products, which feature ruggedized jackets and can withstand higher temperatures and humidity, include:

But Jim Westerman, industrial market manager for The Siemon Company, points to a fundamental problem with any industrial cabling product. Each, he says, are being designed to work in environments that vary wildly. Thus, one of the biggest hurdles in industrial cabling manufacturing is that the environmental hazards are not clearly defined.

"The types of noise are different, and the amount of noise is different from installation to installation," Westerman points out.

The TIA's (www.tiaonline.org) TR-42.9 Industrial Telecommunications Infrastructure subcommittee has been given the task of coming up with an industrial cabling standard. Westerman believes the committee should first focus on the different environmental conditions under which the cables will be forced to work.

There are two distinct marketplaces for industrial cabling systems. One is in a traditional industrial application, where cables are used to deliver Ethernet to a factory or manufacturing floor. The other is in a non-industrial but nevertheless harsh environment. Ethernet has become so universal and cost-effective as a transport medium that it is being used to reach areas once served by other applications.

"Now Ethernet can go into those areas where other applications wouldn't let it before," notes Tony Beam, director of business development for AMP Netconnect. This trend is bolstered by the fact that Category 5e and 6 cabling can bring Ethernet to enterprise end users who need up-to-date information at their fingertips and a seamless transfer of information between the back door manufacturing area and the front corporate office. Factories are eager to break away from proprietary systems and seek more competitively priced, interoperable systems. Thus, UTP cabling manufacturers say they are seeing a greater demand for industrial cabling solutions.

Contractors who have installed commercial Ethernet-based networks are now recognizing a new market and opportunity in the industrial arena—system integration. Brian Shuman, senior product development engineer for Belden CDT and secretary for the TIA TR-42.9 Industrial Telecommunications Infrastructure Subcommittee, says most datacom contractors have the expertise for industrial installations, but may need to come up to speed with the different terminologies.

Shuman believes a conglomeration of people will be involved in industrial installation and maintenance, including contractors and electricians, with networks typically maintained by IT departments and control engineers. As a result, end users will be expecting quality workmanship, since the installation's success will be paramount to the success of their manufacturing.

"The biggest issue is no downtime," says Tom Russell, an attendee at the TR 42.9 subcommittee meetings and vice president of technical marketing for Quabbin Wire & Cable. "If I'm in the office or a bank and lose my e-mail or network for an hour, everybody gets angry. But if you shut down a GM assembly line for an hour, somebody is going to get fired. The losses are huge."

Manufacturers say they are trying to come up with user-friendly, easy-to-install cables and components that will help end users gain Fast Ethernet. Some contractors say a tightly written standard could make a big difference.

"They were much further along than some of the other competitors," opines Gilford, but he believes "a standard will make [all] products much better."

The first draft, which is in the early stages of balloting, may list balanced twisted pair channels of up to 100 meters and up to four connections as a standard industrial network topology. The draft will probably include guidance for extending the length of patch and equipment cords (cord sets) and increasing the number of connections. It will also include guidelines for balanced, twisted two-pair cabling systems for use in the coverage area, plus guidelines and specifications for fiber connectors.

The subcommittee also wants to include normative specifications for connector enclosures in industrial settings, and plans to harmonize with other standards groups. In addition, the subcommittee is working with ODVA (www.odva.org) and seeking input on how to make components robust for these environments. ODVA is an international association comprised of members from leading automation companies. Collectively, ODVA and its members support network technologies based on the Common Industrial Protocol (CIP), which include DeviceNet, EtherNet/IP and CIP Safety. ODVA manages the development of these open technologies, and assists manufacturers and users of CIP-based networks through tools, training and marketing activities.

The TIA subcommittee is also working with the International Organization for Standardization's (ISO; www.iso.org) SC25 Working Group 3 on industrial cabling.

Shuman says one of the challenges of working on the standard is that, historically, industrial control systems have been proprietary, with different designs at every installation. "Companies can make whatever components they want, and we'd just integrate it on a case-by-case basis," he says.

The good news, Shuman says, is that many cabling manufacturers have experience with industrial cabling, and have an accurate view of what is needed in the marketplace. Belden, for example, has had industrial Ethernet products on the market since 1996.

For example, a contractor may purchase what he believes are ruggedized connectors but that may not be sealed to an IP67 (Ingress Protection) rating, which means they are not guaranteed to keep water out. (The IP rating is composed of two numbers, the first referring to the protection against solid objects and the second against liquids. The higher the number, the better the protection. In this case, 6 means the component is totally protected against dust, and 7 means that it is protected against the effect of immersion between 15 centimeters and 1 meter.)

"If a product is labeled to be industrial-hardened, you still may not get what you want," Shuman notes.

Quabbin's Russell says the TIA subcommittee is looking at the various environmental conditions under which industrial cabling and infrastructure will be exposed, including vibration, shock, and elevated or reduced operating temperatures. But there remain differences of opinion on the descriptions of the industrial environment, and the requirements for performance under each condition.

One of the biggest issues is expected to concern specifications for sealed RJ-45 connectors. There are now 30 variants for industrial RJ-45s, and Shuman says there are two subcommittee camps—one that says there should be just one connector interface included in a sealing capsule, the other that says there should be more than one. The first group is looking at commonality, interoperability in the marketplace and ways to minimize confusion for end users, while the other group says the marketplace should decide what is the best product and what base set of performance requirements should be established. These decisions are not expected to come easily.

"As you go up the ladder, these [industrial environment] conditions get worse," says Russell. "But in my opinion, this is going way too slowly. It will take a couple of years to spec this issue."