Number of motor-control Ethernet nodes to triple over five years 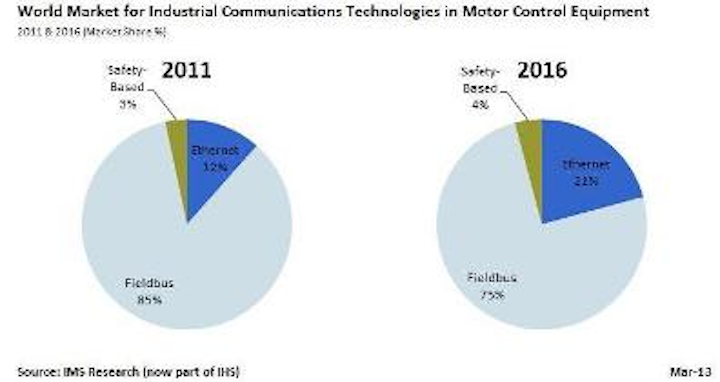 IMS Research, part of IHS, forecasts that Ethernet's share of the market for industrial communications technologies in motor control equipment will increase 9 percentage points, from 12 to 21 percent, between 2011 and 2016.

A new study from IHS Inc.’s IMS Research says that the compound annual growth rate for new motor-control Ethernet nodes will be the highest across the entire industrial space over its five-year span under study (2011-2016), at nearly 30 percent. In all, the use of Ethernet with motor drives and motion controllers will more than triple, from 2011’s 1.8-million figure to more than 5.4 million in 2016.

Analyst Tom Moore commented, “Ethernet, particularly certain industrial variants, is very well suited to drive and motion-control applications. The growing number of Ethernet protocols, which are high-speed, deterministic, and low-jitter, mean its application has never been easier. Some of the most-suited protocols are forecast annual growth rates exceeding 30 percent to 2016.”

By 2016, new Ethernet nodes are forecast to account for 21 percent of the total new networked motor-control products—up from 12 percent in 2011 and helping to chip away at Fieldbus’s market share in that five-year span. IHS says Fieldbus’s share will decrease from 85 percent in 2011 to 75 percent in 2016, while safety-based protocols will tick up from 3 percent in 2011 to 4 percent in 2016. “Ethernet is quickly gaining ground in a market that is well known for being reserved and slow to adopt new technology,” the analyst firm noted.

Moore continued, “Part of the transition to Ethernet is due to the protocols available, such as ProfiNet, Ethernet/IP, PowerLink and EtherCat, which are all very well suited to motor-control applications. In particular, EtherCat is well known for very-high-speed data transmission and low response times. Its adoption is forecast to grow very strongly to 2016, especially as its member count continues to increase.

“The increase in node count has come about for several reasons,” he added. “More and more products are being released with the ability to daisy-chain, requiring at least two ports.”

The analyst firm also says Ethernet’s projected adoption growth is set to outstrip that of Fieldbus technologies in almost all applications. More noted, “It is forecast that in 10 to 15 years Ethernet will have replaced Fieldbus as the mainstream networking technology for motor-control products. This can only be good for the unification and simplification of networking solutions—driving down costs and increasing uptime.”

The statistics come from the IHS report “The World Market for Industrial Ethernet and Fieldbus Technologies—2013 Edition.” You can find more information about that report here.