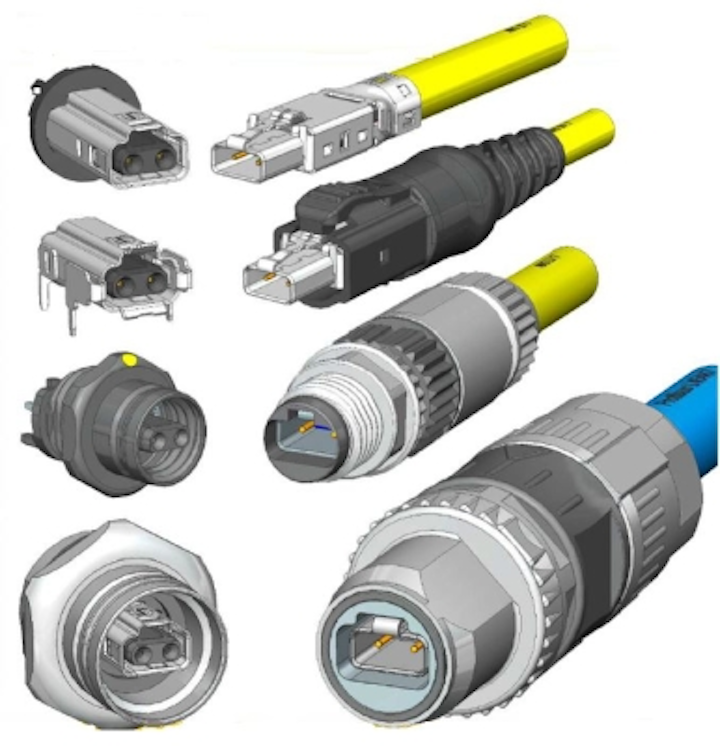 In a round of voting that concluded in August, the standards-development committee ISO/IEC JTC 1/SC 25 Interconnection of Information Technology Equipment, selected two single-pair connector designs as standard interfaces. Committee members chose one design, from CommScope, for use in MICE1 environments and the other design, from Harting, for MICE2/MICE3 environments.

MICE is an acronym for mechanical, ingress, climatic, and electromagnetic. The higher the number, the more severe the environment. In practical application, an example of a MICE1 (M1I1C1E1) environment is commercial office space.

In materials presented to ISO/IEC JTC 1/SC 25, CommScope described its LC-style connector as one that “allows many versions and a rich innovation platform.” Pictured below are images from CommScope’s presentation, including renderings of shielded and unshielded versions of the connector, as well as a coupler version.

The company further stated that the connector’s “low part count and complexity will enable easy economic transition from 1-pair connectors currently in use (screw terminals) and lead to widespread adoption and growth.” Plus, according to CommScope, “Field installation with simple tools will enable installation in ceiling spaces and other difficult areas … contact wiping surfaces and resting surface concept similar to RJ45 will ensure reliable and robust performance.”

In its presentation to ISO/IEC JTC 1/SC 25, Harting explained its connector (several iterations of which are pictured below) “is designed especially for MICE3 applications.” It is rated up to IP65/67, the company said, adding that the connector features “one MDI [medium dependent interface] design for PCB sockets, plug versions with IDC or crimp termination, and sockets for cabling platform for a wide variety of products [including] MDI sockets, plugs, sockets, bulkheads, adapters, cords.” 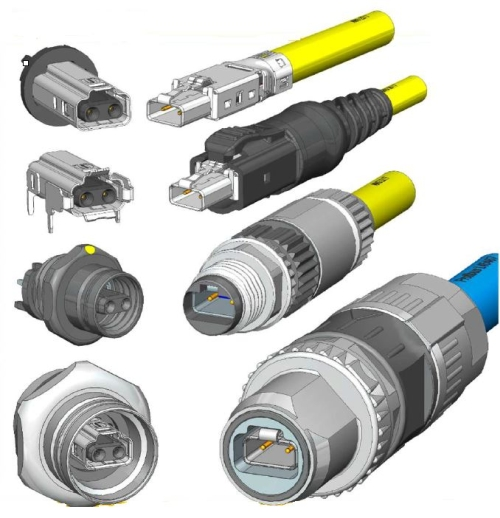 The connector uses already-existing M8 and M12 housings, which Harting says enable simple implementation in devices and other products. The connector provides transmission performance up to 600 MHz in a fully shielded design, and supports Power over Data Lines as well as remote powering for 1-kilometer applications, according to IEEE 802.3cg.

That standard—IEEE 802.3cg—is currently in draft and will define 10-Mbit/sec single-pair Ethernet. Based on the ISO/IEC voting and selection of these two connector interfaces, the IEEE modified text within the latest 802.3cg draft. It now includes the following statement: “Connectors meeting the requirements of IEC 63171-1 (CD) may be used as the mechanical interface to the balanced cabling for M1I1C1E1 environments. The plug connector is used on the balanced cabling and the MDI connector on the PHY.”

If the TIA TR-42.7 Subcommittee moves as expected in its October meeting, we will report on their actions as well.