“The strengthening volume of construction starts in recent months indicates that activity is moving closer to the levels reported in 2018, following sluggish performance at the outset of 2019,” states Dodge Data & Analytics. 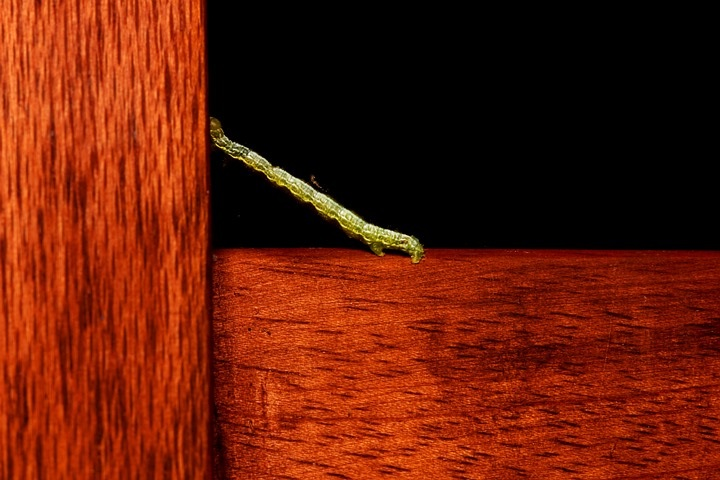 At a seasonally adjusted annual rate of $849.6 billion, new construction starts in July advanced 2% from the previous month, according to Dodge Data & Analytics. This marked the third consecutive monthly increase for total construction starts, following gains of 10% in May and 9% in June. By major sector, nonbuilding construction led the way in July with a 24% hike, boosted by several large public works and electric utility/gas plant projects. These included the $2.7 billion automated people mover system that’s part of the Landside Access Modernization Program at Los Angeles International Airport, a $2.5 billion segment of the Sabine Pass Liquefaction Project in Louisiana, a $1.8 billion natural gas liquids pipeline in Texas, and a $934 million water purification plant expansion in Texas. Nonresidential building in July settled back 4%, following a 16% jump in June that included the start of the $1.1 billion Terminal 5 expansion at Chicago’s O’Hare International Airport. Residential building in July slipped 6%, as multifamily housing retreated from its elevated June amount. Through the first seven months of 2019, total construction starts on an unadjusted basis were $459.3 billion, down 6% from the same period a year ago.

“The strengthening volume of construction starts in recent months indicates that activity is moving closer to the levels reported in 2018, following a sluggish performance at the outset of 2019,” stated Robert A. Murray, chief economist for Dodge Data & Analytics. “Recent support has come from those construction sectors that are partially influenced by public funding, namely institutional building with its June gain and now public works with its July gain. This is typically what takes place during the latter stages of a construction expansion, which also helps to keep the initial stage of a broad-based slowdown to stay moderate. The current year has already seen a pullback for multifamily housing after a robust 2018, and single family housing has not yet provided evidence that it can move beyond its extended plateau any time soon. The commercial building segment so far in 2019 has been mixed – office construction remains on track for a modest gain, but there’s also been generally depressed activity for store construction and some slippage for hotel and warehouse starts.”

Nonbuilding construction in July was $256.1 billion (annual rate), up 24% from June. The public works categories as a group climbed 49%, boosted by the start of several very large projects. The miscellaneous public works category (which is comprised of rail-related projects, pipelines, and site work) soared 177% in July. A primary reason for that gain was the $2.7 billion, 2.25 mile automated people mover system included in the Landside Access Modernization Project at Los Angeles International Airport which was entered as July construction start. The automated people mover system will transport passengers from the central terminal building to other components of the project, such as intermodal transportation facilities and a rental car facility. Also entered as a July start was a $1.8 billion natural gas liquids pipeline in Texas, that will ship natural gas liquids from the West Texas Permian Basin to a fractionator plant near Corpus Christi. The water supply category jumped 82% in July, lifted by the start of the $934 million Northeast Water Purification Plant expansion in the Houston TX area, and sewer construction advanced 30%. Highway and bridge construction in July improved 9%, rebounding after a 5% decline in June. Large highway and bridge projects entered as July construction starts were the $238 million project to repair the approaches and arches of the Brooklyn Bridge in New York City, a $235 million road paving project in Portsmouth VA, and a $118 million highway expansion project in Bakersfield CA. For the month of July, the top five states in terms of the dollar amount of highway and bridge construction starts were – California, Texas, New York, Virginia, and Florida. River/harbor development was the one public works category to retreat in July, falling 14% after a very strong June, yet the extent of that decline was cushioned by the start of a $387 million cutoff wall at the Herbert Hoover Dike in Okeechobee FL. 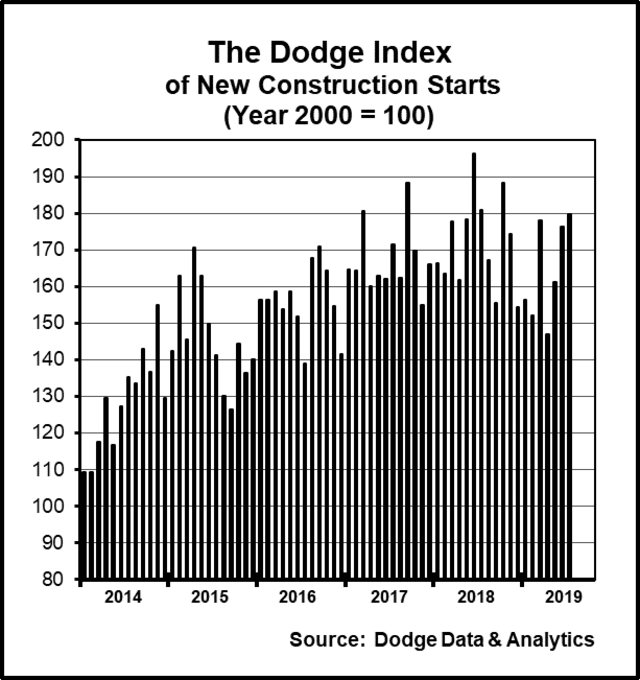 Nonresidential building in July slipped 4% to $293.4 billion (annual rate), easing back after the 16% increase reported in June. The institutional building categories as a group fell 17% after surging 37% in June, which featured elevated activity for transportation terminals, public buildings (detention facilities and courthouses), and healthcare facilities. The transportation terminal category plunged 64% in July after being lifted in the previous month by the start of the $1.1 billion expansion of Terminal 5 at Chicago’s O’Hare International Airport and the $370 million Terminal E modernization project at Boston’s Logan International Airport, among other transportation terminal projects. The largest transportation terminal project entered as a July construction start was the $310 million concourse expansion at Phoenix Sky Harbor International Airport. The public buildings category fell 59% in July, following its June amount that included a $320 million criminal justice center in Detroit MI. The largest public buildings project entered as a July start was the $88 million Otay Mesa Land Port of Entry expansion in San Diego CA. The healthcare facilities category in July retreated 10% from its elevated June pace, although the latest month still included the start of five projects valued each at $100 million or more, led by the $350 million Virginia Commonwealth University Health Children’s Hospital in Richmond VA and the $200 million new inpatient facility at Beth Israel Deaconess Medical Center in Boston MA.

Educational facilities, the largest nonresidential building category by dollar amount, slipped 3% in July after showing improvement during the previous three months. Even with the slight decline, the latest month did see the start of four high school construction projects valued each in excess of $125 million, located in East Providence RI ($190 million), Portland OR ($146 million), Van Nuys CA ($140 million), and Rosharon TX ($126 million). On the plus side in July, amusement-related construction climbed 44%, boosted by the $584 million convention center portion of the $1.1 billion Broward Convention Center and Omni Hotel project in Ft. Lauderdale FL, as well as the $110 million expansion to the Charlotte Convention Center in Charlotte NC. The religious buildings category jumped 95% in July from a very low June amount, helped by the July start of the $44 million St. Martin’s Episcopal Church in Houston TX.

The commercial building categories as a group grew 4% in July, continuing to strengthen for the second month in a row after subdued activity back in May. Store construction, despite its weakening trend during 2019, advanced 24% in July with the start of a $180 million retail complex in Ewa Beach HI. Hotel construction grew 12% in July, lifted by the $491 million hotel portion of the Broward Convention Center and Omni Hotel project in Ft. Lauderdale FL. Office construction edged up 1% in July, featuring the start of the $660 million U.S. Army East Campus Building at Ft. Meade MD, the $450 million Google One Westside Office Campus in Los Angeles CA, the $327 million Bullfinch Crossing office tower in Boston MA, and the $200 million Royal Caribbean headquarters campus in Miami FL. Additional support for the office category came from the start of the $300 million Compass Data Center in Goodyear AZ. Warehouse construction in July fell 13%, following a 20% gain in June. The manufacturing building category in July bounced back 58% after a lackluster June, lifted by the start of a $1.0 billion LCD display fabrication plant estimated for the Foxconn manufacturing complex in Mount Pleasant WI and a $780 million oil refinery in Belfield ND.

Residential building in July was $300.1 billion (annual rate), down 6% from June. After climbing 28% in June, multifamily housing retreated 16% in July as the current year’s moderate pullback resumed. The July pace for multifamily housing was down 15% from its average monthly rate during 2018. There were 8 multifamily projects valued each at $100 million or more that reached groundbreaking in July, compared to 14 such projects in June. The large July multifamily projects were led by the $240 million ArtHaus multifamily high-rise in Philadelphia PA, a $235 million multifamily high-rise in the Hudson Yards district of New York NY, and a $190 million multifamily high-rise in New Rochelle NY. During July the top five metropolitan areas ranked by the dollar amount of multifamily starts were – New York NY, Miami FL, Philadelphia PA, Washington DC, and Austin TX. Single family housing in July receded 2%, slipping for the second month in a row after June’s 3% decline. The July pace for single family housing was down 6% from its average monthly rate during 2018, as affordability constraints resulting from high home prices continue to outweigh the benefits of low mortgage rates. By major region, single family housing showed this performance during July versus June – the Northeast, up 4%; the South Atlantic, up 1%; the South Central, unchanged; the Midwest, down 4%; and the West, down 5%,

The 6% decline for total construction starts on an unadjusted basis during the January-July period of 2019 was due to reduced activity for two of the three main construction sectors. Nonresidential building fell 9% year-to-date, with this pattern by segment – commercial building down 1%, institutional building down 7%, and manufacturing building down 46%. The steep drop for manufacturing building reflected the comparison to a very strong volume during the first seven months of 2018, that included such projects as a $6.5 billion uranium processing facility in Oak Ridge TN and a $2.4 billion petrochemical plant in Channelview TX. If the manufacturing building category is excluded, nonresidential building year-to-date would be down 4%. Residential building year-to-date also fell 9%, with single family housing down 7% and multifamily housing down 14%. Nonbuilding construction was the one major sector that was able to post a year-to-date gain, rising 2%, as a 132% increase for electric utilities/gas plants outweighed a 12% decline for public works. The public works year-to-date amount was restrained by a sharp 29% decline for the miscellaneous public works category (the result of a substantially lower dollar amount of new pipeline starts). If the miscellaneous public works category is excluded, public works during the first seven months of 2019 would be down only 4% and nonbuilding construction would be up 14%. By major region, total construction starts during the first seven months of 2019 revealed this pattern – the Midwest, down 4%; the South Central, down 5%; the South Atlantic, down 6%; the Northeast, down 8%; and the West, down 9%.