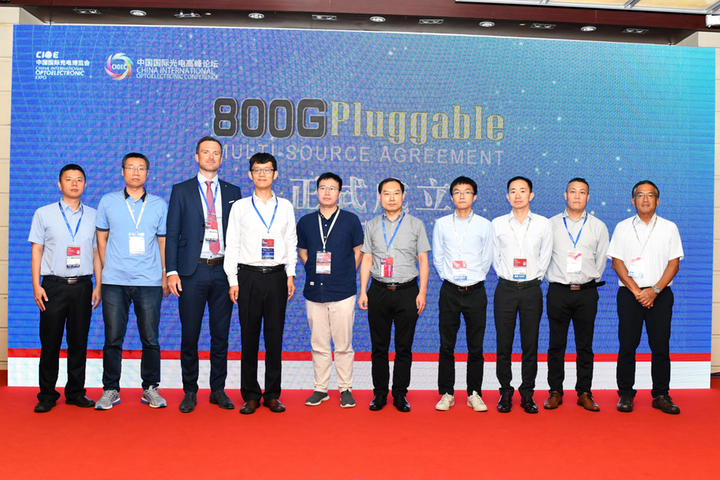 By STEPHEN HARDY, Lightwave -- Nine companies used this month's CIOE2019 event in Shenzhen, China to launch the 800G Pluggable Multisource Agreement (MSA). The group will target PAM4-based aggregate 800-Gbps Ethernet transmission for data center network applications. The MSA’s specification will support 8x100G and 4x200G optical transmission, with the latter a focus of development within the group.

Inaugural participants in the MSA include Accelink, China Telecommunication Technology Labs (CTTL), H3C, Hisense Broadband, Huawei Technology Co. Ltd., Luxshare, Sumitomo Electric Industries Ltd., Tencent, and Yamaichi. The companies believe that there will be a need for Ethernet transmission at 800 Gbps first appearing around 2021 and ramping in 2023, before the IEEE is likely to develop 800 Gigabit Ethernet standards. So they’re prepared to help fill the gap with a PMD specification that will achieve 800 Gbps in aggregate.

The MSA will target optical 8x100G and 4x200G based on PAM4 modulation for applications of 100 m, 500 m, and 2 km. 4x200G based on PAM4 remains an area of research, although the MSA members referenced a proof-of-concept demonstration of 224G PAM4 MSA member Huawei has conducted as a promising start. The MSA will further explore the optimal modulation scheme and forward error correction (FEC) for 4x200G as part of its efforts. The specification likely will rely on 8x112G on the host side.

The specification will target pluggable optical modules, potentially in QSFP112-DD and OSFP 32 form factors, as the interface mechanism. While the MSA members recognize the ongoing work and interest in onboard optics, they believe that pluggables will remain the preferred interface during the time frame they expect data center network operators to require 800G. The first specification is expected to be released in the fourth quarter of 2020, with the first pluggable subcomponents based on the specification appearing on the market a year later.

Vladimir Kozlov, founder and CEO of market research and analysis firm LightCounting Market Research, is in general agreement with the MSA’s beliefs. “Our LightCounting Forecast model indicates that operators of cloud data centers will need to deploy 800G optics by 2023-2024 to keep up with the growth of data traffic,” he was quoted as saying in an MSA press release. “Most of 800G will still be pluggable transceivers, but we expect to see some implementation of co-packaged optics as well.”

Those interested additional information about the MSA, including how to join, are invited to contact Dr. Hua Zhang at HiSense.