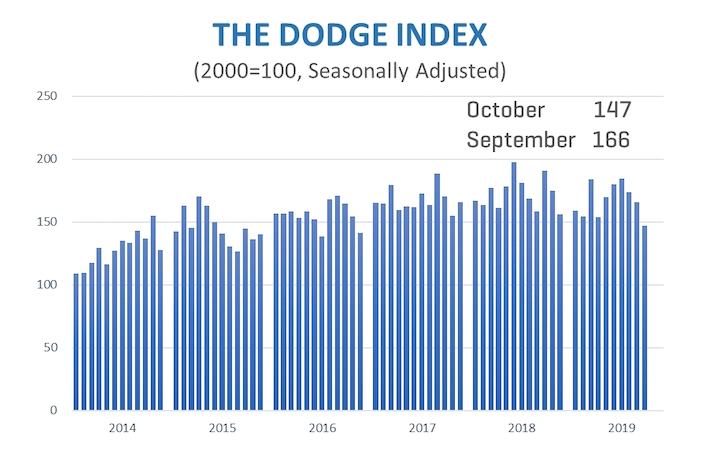 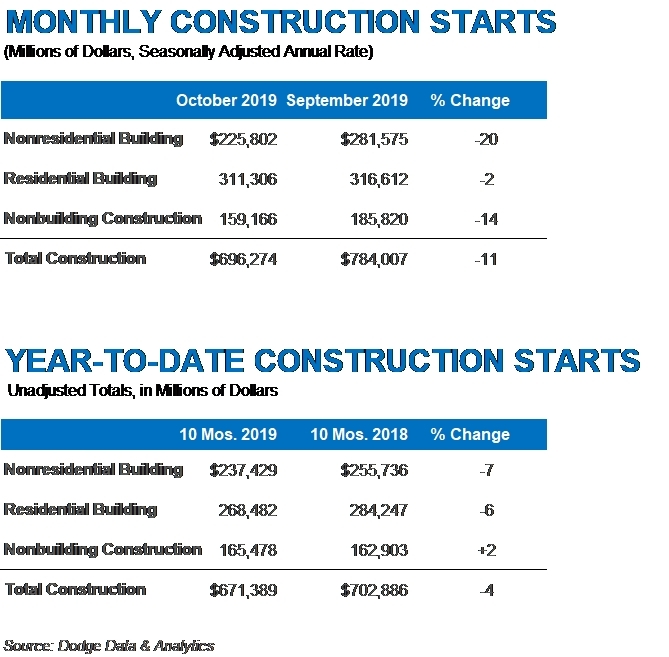 According to Dodge, by major sector, nonresidential building starts fell 20% from September to October and nonbuilding starts dropped 14%, while residential starts moved 2% lower. The October statistics pushed the Dodge Index down to 147 (2000=100) compared to 166 in September.

“Concern over the health of the U.S. economy continues to play a key role in the pullback in starts over the past few months,” stated Richard Branch, Chief Economist for Dodge Data & Analytics. “However, solid real estate fundamentals (such as vacancy rates) in addition to stable public funding will continue to support a modest level of construction activity across both public and private projects.”

Nonbuilding construction fell 14% in October to a seasonally adjusted annual rate of $159.2 billion. Starts in the electric utility/gas plant category fell 69% in October as activity retreated from a strong September. Environmental public works starts (drinking water, sewers, hazardous waste, and other water resource projects) moved 12% lower over the month. On the plus side, highway and bridge starts increased 4% in October and miscellaneous nonbuilding starts increased 14%.

Through the first ten months of 2019, nonbuilding construction was 2% higher than in the comparable period of 2018. The electric utility/gas plant category was 108% higher than a year earlier and environmental public works was up 2%. Miscellaneous nonbuilding was 21% lower through ten months and highways and bridges declined 10%.

Nonresidential building starts lost 20% over the month in October, falling to $225.8 billion (at a seasonally adjusted annual rate). This steep decline comes after a very strong September that saw two projects valued at nearly $1 billion break ground — a consolidated rental car facility in Los Angeles CA and a large manufacturing complex in Detroit MI. In October, commercial starts fell 3% with gains in the office and hotel sectors muting the downturn. Manufacturing starts peeled back 69% and institutional starts moved 20% lower.

On a year-to-date basis through October, nonresidential building starts were 7% lower than a year earlier. Commercial starts were up 3% due to gains in office buildings, warehouses and parking structures, while institutional construction was down 6% through October with all major categories posting declines. Manufacturing starts were 43% lower.

Residential building dropped 2% in October to $311.3 billion at a seasonally adjusted annual rate. Single family housing starts were 7% lower, while multifamily starts increased 14% over the month. The largest multifamily construction project to get underway in September was the $278 million second tower of the Lakeshore East – Cascade Apartment Tower in Chicago IL. Also breaking ground during the month was the $253 million (apartment portion only) Azure Ala Mona Residential building in Honolulu HI and the $230 million (apartment portion only) 40 Trinity Place Residential Tower in Boston MA.

Through the first ten months of the year, residential construction starts were 6% lower than in the same period of 2018. Single family starts were down 3%, while multifamily declined 12% year-to-date. To learn more, visit www.construction.com.