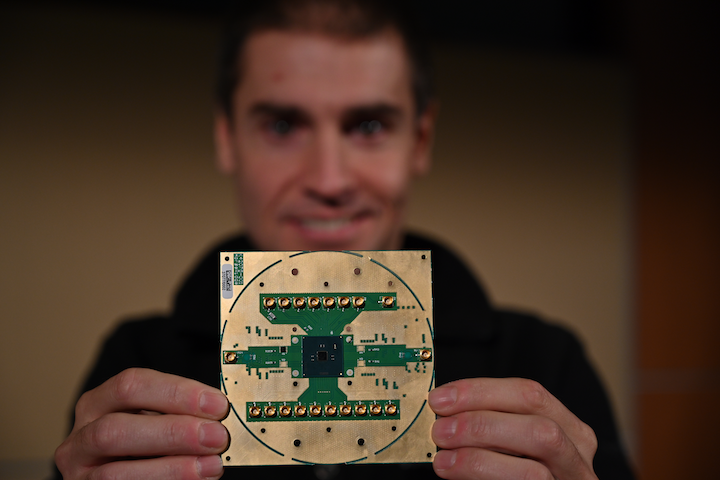 In the race to realize the power and potential of quantum computers, researchers have focused extensively on qubit fabrication, building test chips that demonstrate the exponential power of a small number of qubits operating in super-position. However, in early quantum hardware developments — including design, testing and characterization of Intel’s silicon spin qubit and superconducting qubit systems — Intel reports that it has identified the major bottleneck toward realizing commercial-scale quantum computing: interconnects and control electronics.

Forthwith, Intel Labs on Dec. 9 unveiled what is believed to be a first-of-its-kind cryogenic control chip — code-named “Horse Ridge” — that will speed up development of full-stack quantum computing systems. Horse Ridge will enable control of multiple quantum bits (qubits) and set a clear path toward scaling larger systems — a major milestone on the path to quantum practicality. Developed together with Intel’s research collaborators at QuTech, a partnership between TU Delft and TNO (Netherlands Organization for Applied Scientific Research), Horse Ridge is fabricated using Intel’s 22nm FinFET technology. In-house fabrication of these control chips at Intel will dramatically accelerate the company’s ability to design, test and optimize a commercially viable quantum computer.

With Horse Ridge, Intel says it introduces an elegant solution that will enable the company to control multiple qubits and set a clear path toward scaling future systems to larger qubit counts — a major milestone on the path to quantum practicality. What is quantum practicality? As explained by Intel: "Quantum computers promise the potential to tackle problems that conventional computers can’t handle by leveraging a phenomena of quantum physics that allows qubits to exist in multiple states simultaneously. As a result, qubits can conduct a large number of calculations at the same time — dramatically speeding up complex problem-solving."

The quantum research community is still at "mile one" of a marathon toward demonstrating quantum practicality, adds the company; a benchmark against which the quantum research community can determine whether a quantum system can deliver game-changing performance to solve real-world problems. Intel asserts its investment in quantum computing covers the full hardware and software stack in pursuit of the development and commercialization of a practical, commercially viable quantum system.

“While there has been a lot of emphasis on the qubits themselves, the ability to control many qubits at the same time had been a challenge for the industry. Intel recognized that quantum controls were an essential piece of the puzzle we needed to solve in order to develop a large-scale commercial quantum system. That’s why we are investing in quantum error correction and controls. With Horse Ridge, Intel has developed a scalable control system that will allow us to significantly speed up testing and realize the potential of quantum computing,” said Jim Clarke, Intel’s director of Quantum Hardware.

The manufacturer notes that, to date, researchers have been focused on building small-scale quantum systems to demonstrate the potential of quantum devices. In these efforts, researchers have relied on existing electronic tools and high-performance computing rack-scale instruments to connect the quantum system inside the cryogenic refrigerator to the traditional computational devices regulating qubit performance and programming the system.

"These devices are often custom-designed to control individual qubits, requiring hundreds of connective wires into and out of the refrigerator in order to control the quantum processor," adds the company. "This extensive control cabling for each qubit will hinder the ability to scale the quantum system to the hundreds or thousands of qubits required to demonstrate quantum practicality, not to mention the millions of qubits required for a commercially viable quantum solution."

Horse Ridge is described by Intel as "a highly integrated, mixed-signal SoC that brings the qubit controls into the quantum refrigerator — as close as possible to the qubits themselves. It effectively reduces the complexity of quantum control engineering from hundreds of cables running into and out of a refrigerator to a single, unified package operating near the quantum device. Designed to act as a radio frequency (RF) processor to control the qubits operating in the refrigerator, Horse Ridge is programmed with instructions that correspond to basic qubit operations. It translates those instructions into electromagnetic microwave pulses that can manipulate the state of the qubits."

Named for one of the coldest regions in Oregon, the Horse Ridge control chip was designed to operate at cryogenic temperatures — approximately 4 Kelvin. To put this in context, 4 Kelvin is only warmer than absolute zero — a temperature so cold that atoms nearly stop moving. This feat is particularly exciting as Intel progresses its research into silicon spin qubits, which have the potential to operate at slightly higher temperatures than current quantum systems require.

Today, a quantum computer operates at in the millikelvin range— just a fraction of a degree above absolute zero. But silicon spin qubits have properties that could allow them to operate at 1 Kelvin or higher temperatures, which would dramatically reduce the challenges of refrigerating the quantum system.

As research progresses, Intel aims to have cryogenic controls and silicon spin qubits operate at the same temperature level. This will enable the company to leverage its expertise in advanced packaging and interconnect technologies to create a solution with the qubits and controls in one streamlined package.

Learn more about this technology.

Corning and Intel team up on in-building 5G