An agreement among industry and government entities established DCeP as the measurement stick for a facility's useful work based on energy consumed. 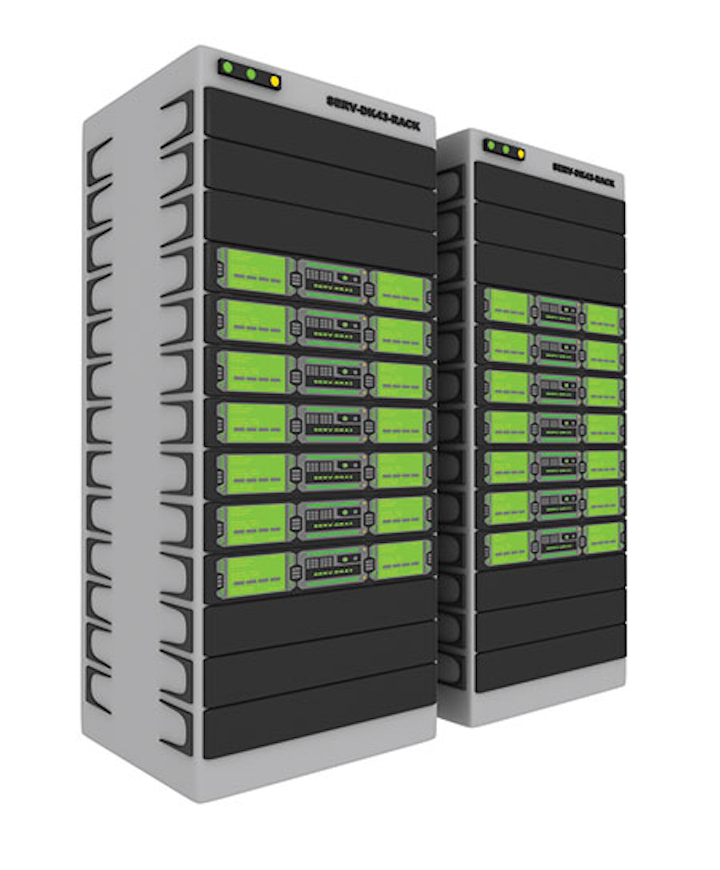 An agreement among industry and government entities established DCeP as the measurement stick for a facility's useful work based on energy consumed.

For years the Green Grid Association (www.thegreengrid.org) has administered widely accepted programs to quantify data center facilities' energy efficiency. The most-recognized benchmark is Power Usage Effectiveness-PUE-which the Green Grid originated in 2007. The calculation of PUE is a simple division, with a data center's total facility power as the numerator and the facility's IT equipment power as the denominator. The lower the number, the greater the efficiency.

In 2014 The Green Grid along with ASHRAE (www.ashrae.org) published a book titled "PUE: A Comprehensive Examination of the Metric." The publication is the eleventh in ASHRAE's Datacom Series, which is produced by the group's Technical Committee (TC) 9.9, Mission Critical Facilities, Data Centers, Technology Spaces and Electronic Equipment. In the book's introduction, its creators remind us, "PUE is not a data center productivity metric, nor is it a standalone, comprehensive efficiency metric. PUE measures the relationship between the total facility energy consumed and the IT equipment energy consumed. When viewed in the proper context, PUE provides strong guidance for a useful insight into the design of efficient power and cooling infrastructure architectures, the deployment of equipment within those architectures, and the day-to-day operation of that equipment."

The book addresses the nuances of PUE calculation and administration. An entire chapter is devoted to the measurement of PUE in dedicated data center facilities, and its measurement in mixed-use buildings. Other chapters address factors that affect PUE, how to improve the rating, source energy, partial PUE, scalability and statistical analysis.

Just as the Green Grid has refined the PUE specification over its seven-plus years in existence, the association also has developed other metrics by which to measure energy consumption, and the efficiency thereof, in data centers. Carbon Usage Effectiveness (CUE) and Water Usage Effectiveness (WUE) are among those other metrics. In white papers published in 2010 and 2011 respectively, the Green Grid described the CUE and WUE metrics and their implementations.

The document "CUE: A Green Grid Data Center Sustainability Metric" introduces CUE as a metric to address carbon emissions associated with data centers. "The impact of operational carbon usage is emerging as extremely important in the design, location, and operation of current and future data centers," the paper says. "When used in combination with the PUE metric, data center operators can quickly assess the sustainability of their data centers, compare the results, and determine if any energy efficiency and/or sustainability improvements need to be made."

The calculation of CUE depends on whether the data center obtains its entire power source from the energy grid and generates no local carbon dioxide, or if it produces or co-produces electricity on-site or generates carbon dioxide in other manners, such as maintenance operation of diesel generators. For the former data center type, CUE is calculated by dividing the total carbon-dioxide emissions caused by the total data center energy (numerator), by the IT equipment energy (denominator). In this equation, "'Total data center energy' is the same value as the numerator of the PUE metric," the Green Grid explains. "The numerator in this CUE metric is the total carbon emissions caused by the use of energy in the PUE metric."

For the latter data centers characterized earlier-those that produce or co-produce electricity or generate carbon dioxide in other manners-"the formula remains the same, but the source CO2 data will come from a combination of the percentage of grid-sourced energy ... [and] the actual CO2 emission data from locally produced electricity or generating sources."

After breaking down the multiple equations that calculate CUE and calculate its component parts, the Green Grid document says that overall CUE provides a way to determine: 1) opportunities to improve a data center's sustainability; 2) how a data center compares with similar data centers; 3) if the data center operators are improving the designs and processes over time; 4) opportunities for the consideration of renewable power sources; and 5) tradeoffs in energy efficiency strategies by comparing total CUE under various use scenarios, operating conditions, and other variables. The organization commented, "While this metric is not fully detailed at this point, The Green Grid feels it is important to consider carbon emissions in data centers and begin calculating CUE in data center operations ... The Green Grid feels that CUE and future xUE metrics will have the same positive impact on the industry as did PUE, and sees this as a huge opportunity for the industry to rally around."

In 2011 the Green Grid published a similar paper introducing and defining one such "xUE" metric: WUE-Water Usage Effectiveness. Once again the equation for calculating the metric is simple: annual water usage (numerator) divided by IT equipment energy (denominator). WUE is represented as liters per kilowatt hour (L/kWh). In the document titled "Water Usage Effectiveness: A Green Grid Data Center Sustainability Metric," the association commented, "Both carbon emissions and water usage are emerging as extremely important considerations in the design, location, and operation of data centers in the future. The combination of PUE, CUE and WUE enables data center operators to quickly assess important sustainability aspects in their data centers."

The paper acknowledges and speaks to the complicated consequences that can result from water reduction. "Water use reductions generally have adverse tradeoffs with increased energy use from increased chemical use (in water treatment systems)," it says. "A rise in energy use has specific effects on the 'site' as well as on the 'source' ... If the site reduces its water use, there could be associated energy cost. This tradeoff may be attractive at the site level-a decrease in water use in exchange for an increase in kilowatt-hours purchased or generated. However, if the goal is to minimize water use at the regional or watershed level, then the change may actually have an adverse impact that needs to be considered. It takes a significant amount of water to generate electricity. The amount of water depends on the generation method used, but the majority of electricity generation today is still very water-intensive. So reducing water use at the site may increase electricity use, which will likely result in increased water use at the power-generation source."

The paper describes appropriate uses for WUE and WUE Source, and includes an appendix outlining EWIF.

Since being established several years ago, the CUE and WUE metrics have developed and evolved. In that time, the Green Grid has continued to be at the forefront of developing and promoting measurable standards for data center efficiency. The Green Grid has been a member of a global task force that also included the U.S. Department of Energy's Save Energy Now and Federal Energy Management Programs; the U.S. Environmental Protection Agency's Energy Star Program; the European Commission Joint Research Centre for Data Centres Code of Conduct; Japan's Ministry of Economy, Trade and Industry; and Japan's Green IT Promotion Council. Over five years of collaboration, the task force issued a number of public memos related to these standards of measurement.

In October 2012 it reached consensus on the use of the Green Energy Coefficient (GEC), Energy Reuse Factor (ERF) and CUE metrics. Prior to that consensus the group agreed on guidelines and specific measurement protocols for PUE.

After the 2012 consensus on GEC, ERF and CUE, Schneider Electric's (www.schneider-electric.com) director of global standards, codes and environment, Jay Taylor, took to his blog to provide an overview of those decisions. Taylor chairs the Green Grid's liaison committee. In his blog post, he explained, "When implemented correctly, these metrics save organizations a lot of time, money and additional resources (can you say 'energy'?) ... This brings us one more step closer to a universally adopted set of metrics, indices and measurement protocols that will have a positive impact on the industry and the environment."

The following descriptions
are taken verbatim from Taylor's
blog post.

• Energy Reuse Factor-ERF identifies the portion of the energy that is exported for reuse outside of the data center. ERF is computed as reuse energy divided by total energy consumed by the data center.

In March 2014, the same task force issued its fourth and final public memo, which the Green Grid explained at the time "concludes five years of work to harmonize directions designed to improve key energy efficiency metrics within data centers." In that final memo, the task force recommended that data centers define attributes and measure Data Center Energy Productivity (DCeP). When announcing this recommendation, the Green Grid explained DCeP as "an equation that quantifies useful work that a data center produces based on the amount of energy it consumes. DCeP allows each organization to define 'useful work' as is applicable to its business, thus creating a custom and meaningful metric. For example, a retail business may use number of sales as the measure of useful work, while an online search company may use the number of searches completed."

After the announcement of DCeP, Raritan's (www.raritan.com) senior product marketing manager Paula Alves commented on the company's data center blog, "The concept is reminiscent of eBay's recent unveiling of a methodology they have coined Digital Service Effectiveness (DSE). DSE lays out the most important dimensions eBay data centers track into a single dashboard: performance, cost, environmental impact, and revenue. The dashboard draws direct connections between performance and cost, providing insights that have a direct impact on the company's bottom line.

"While DCeP provides flexibility in allowing each business to define useful work, there are still several hurdles to overcome-inconsistencies in data center comparisons, for instance. But even so, in its announcement about DCeP, Green Grid appears hopeful that these inconsistencies can be smoothed out over time, ultimately providing the industry a better way to make energy efficiency improvements." She added that a data center infrastructure management (DCIM) solution is "an excellent starting point for those who aren't quite ready to implement new or existing data center energy efficiency metrics."

While the metrics discussed in this article relate to the energy consumption of data center facilities, a metric known as performance per watt (PPW) is a common means by which computing and supercomputing devices are measured. Wikipedia informs us that in computing, PPW "is a measure of the energy efficiency of a particular computer architecture or computer hardware. Literally, it measures the rate of computation that can be delivered by a computer for evey watt of power consumed."

Within the PPW entry on Wikipedia is information about the Green500 List, which is a subset of the TOP500 supercomputer list; Green500 ranks top supercomputers according to their energy efficiency. Revisited every six months, the Green 500 was most recently compiled in June 2014 (www.green500.org). The June compilation "shows an increasing trend of heterogeneous supercomputing systems at the top of the list," the Green 500 said when making the list public. "The top 17 spots of the list are occupied by heterogeneous computing systems ... [defined as] ... one that uses computational building blocks that consist of two or more types of 'computing brains.'"