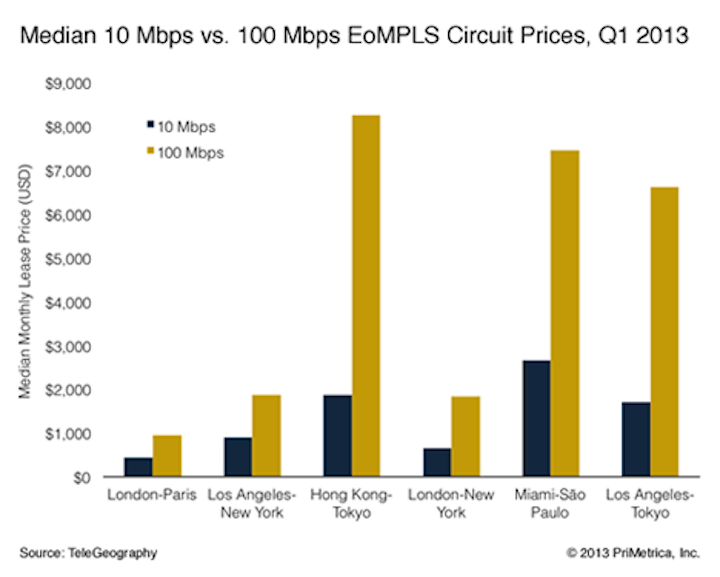 New data from TeleGeography’sEthernet Pricing Service reveals that there are widespread geographic disparities in Ethernet over MPLS (EoMPLS) price levels and structures, as alternative to legacy SDH/SONET technologies.

Not that anyone's in a hurry to rush back to the hoary days of SDH/SONET dominance. (Ed. note -- It's a Carrier Ethernet world now; we just live in it.) "Paying two to five times the price for ten times the Ethernet capacity equates to significantly less than paying the long-standing SDH/SONET multiple of 2.5 times the price for just four times the capacity," notes TeleGeography analyst Brianna Boudreau.

According to TeleGeography's data, the lowest prices for point-to-point EoMPLS circuits are found on routes between major cities in Europe and the US, and on trans-Atlantic links. In Q1 2013, the median monthly price of a 10 Mbps circuit was USD446 between London and Paris, USD896 from Los Angeles to New York, and USD652 from London to New York.

Regional differences are also apparent when examining the cost associated with increasing capacity. On major terrestrial routes in Europe and North America, the median price of a 100 Mbps EoMPLS circuit was approximately twice the price of a 10 Mbps circuit, at USD948 per month between London and Paris and USD1,869 per month between Los Angeles and New York.