The Switch Station 1 and Switch Station 2 solar power plants, with a combined generation capacity of 179 Megawatts, were formally recognized in a commissioning event held in Apex, Nevada last Dec. 11 as fully commissioned and in commercial operation. 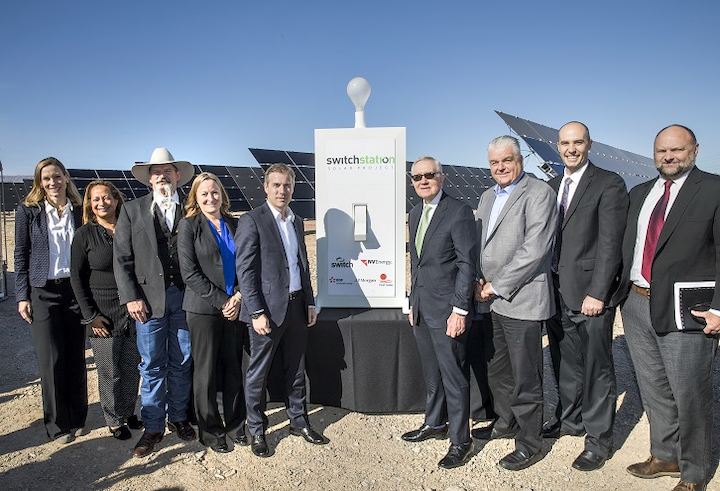 The Switch Station 1 and Switch Station 2 solar power plants, with a combined generation capacity of 179 Megawatts, were formally recognized in a commissioning event held in Apex, Nevada last Dec. 11 as fully commissioned and in commercial operation. The celebration was attended by government officials, project owners and the energy offtaker.

Following an expedited permitting process, construction of the project took approximately 12 months, creating about 550,000 workhours, and had a total construction workforce of 1,300. Combined, the power plants cover about 1,797 acres and are comprised of 1,980,840 solar panels, the equivalent of 275 football fields, and 5,450,056 feet of cable, equaling 1,032 miles or the distance from Las Vegas to Seattle. The 179 MW of power generates enough clean solar energy to meet the consumption of 46,000 homes, displacing approximately 265,000 metric tons of carbon dioxide (CO2) annually, equal to taking about 52,000 cars off the road.

“Less than a decade ago, Nevada’s solar energy landscape was nonexistent, but this commissioning helps fulfill the vision I had to make our state the leader in renewable energy development,” said U.S. Senator Harry Reid. “A technology giant like Switch committing to using 100% renewable energy is truly visionary and grows our clean energy economy by creating hundreds of good-paying labor construction jobs here.”

“Technology is revolutionizing the way renewable, clean energy is produced, delivered and consumed and we are proud to be leaders in driving that change,” said Switch Executive Vice President of Strategy Adam Kramer. “Switch Station 1 and Switch Station 2 reflect our company’s bedrock value of ensuring the data that runs our planet does not ruin our planet by building new, local, renewable energy resources.”

According to a press release, located in Clark County, Nevada the Switch Station solar projects are the first-ever utility-scale solar power plants to be built in one of the Bureau of Land Management’s Solar Energy Zones. First Solar, the nation’s largest developer of utility-scale solar projects, acquired the land to construct the facility through a lease auction in 2014. EDF Renewable Energy, a leading U.S. independent power producer, acquired the Switch Station projects from First Solar to complement its existing portfolio of renewable energy projects in the United States, Canada and Mexico.

“I am proud to participate in the dedication of Switch Station 1 and Switch Station 2 solar projects. This is another great example of the Federal Government and private industry collaborating on improving our nation’s energy independence and infrastructure under the auspices of multiple use of our shared public lands,” said John Ruhs, BLM Nevada State Director.

“The project represents another clear demonstration of EDF RE’s ambition in the solar business and also our first opportunity in Nevada, a state with world-class solar resources,” said Cliff Graham, Vice President, U.S. Development for EDF Renewable Energy. “EDF RE is positioned to invest $3 billion between now and 2020 in renewable projects across the country; we anticipate to deliver on our projection and bring more jobs, tax dollars and investment to Nevada.”

“Between 2005 and 2015, Nevada tripled its in-state renewable energy production and reduced carbon emissions in the electricity sector by 44 percent,” said Dave Ulozas, NV Energy Senior Vice President of Renewable Resources. “These two important Switch Station projects are two of 16 solar resources that are currently meeting the needs of our customers and companies here in Nevada, and NV Energy has more planned for the future.”

“The Switch Station solar projects are a great example of how our commitment to renewable energy has helped to stimulate economic growth in the County. The solar projects created hundreds of construction jobs and economic benefits, and the use of our abundant natural resources are fueling long-term, high-tech job creation centers such as Switch,” said Steve Sisolak, Chairman of the Clark County Commission.

“This project confirms that solar energy is now available and priced competitively with other energy sources that rely on carbon-based fuels,” said Kathryn Arbeit, Vice President of Project Development Americas for First Solar. “Our photovoltaic technology is setting the standard for affordable, clean, renewable energy. By continuously innovating, we are driving down the cost of solar electricity and providing a solution that addresses energy security and water scarcity. We are thrilled to continue working with our partners to deliver on our joint commitment to build a more sustainable energy future.”