Per the new data from IDC, the worldwide enterprise and service provider router market fell by 5.1% on a year-over-year basis in 3Q18 with the major service provider segment, which accounts for 76.2% of revenues, declining by 7.3%.

According to the analyst, from a geographic perspective, the 3Q18 Ethernet switch market had a strong quarter across the globe. The Asia/Pacific (excluding Japan) (APeJ) region grew 15.8% year over year. Within the region, Indonesia had notable growth of 40.2% year over year, while Taiwan's market grew 27.8%. The region's largest market, the People's Republic of China, grew 15.8% while Japan's Ethernet switch market rose 4.0%.

Latin America was the one region in the world that saw a year-over-year decline, ending the quarter down 4.5%. Mexico, the region's largest market, grew 6.5% but that was offset by Argentina's 10.9% decline and Colombia's drop of 13.5%. The Ethernet switch market in the United States rose 5.9% while Canada's market grew 6.0%.

"Digital Transformation and adoption of Third Platform technologies continue to drive demand for network transformation and in turn the Ethernet switching equipment market," said Rohit Mehra, vice president, Network Infrastructure, at IDC. "While hyperscalers and cloud service providers are pushing consumption at the high end of the switching market, there remains strong growth in the enterprise campus and lower speed switching platforms too, highlighting the increased demands of the network from organizations of all sizes." 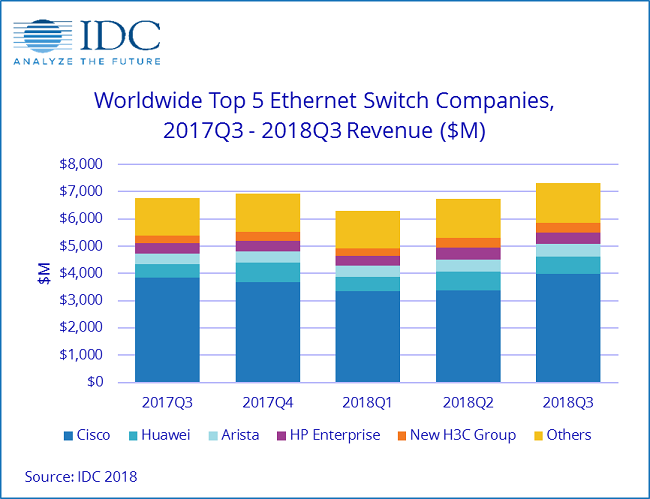 Vendor highlights for each market, according to the analyst, include the following:

Arista Networks saw Ethernet switch revenues increase 27.6% in 3Q18, bringing its share to 6.6% of the total market, up from 5.6% a year earlier. With its focus on the datacenter, the company continues to cater to the higher end of Ethernet switch speeds with 100Gb revenues accounting for 66.1% of the company's total revenue, indicating the company's focus on cloud providers and large enterprises.

"The Ethernet switch market remains strong across the globe, with both mature and emerging markets looking to capitalize on the benefits that higher-speed switching platforms and advanced automation tools enable," said Petr Jirovsky, research manager, IDC Networking Trackers. "This creates a competitive market for enterprises to choose from a variety of products and creates strong opportunity for vendors to help customers in their network transformation journeys."