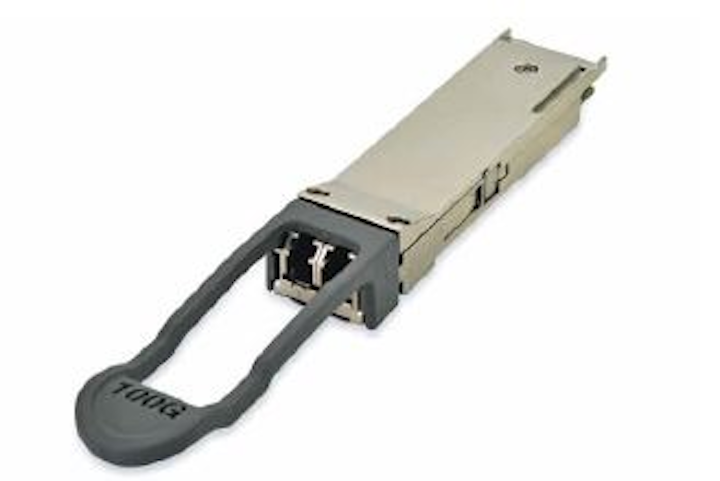 Large- and medium-sized enterprises have been widely deploying 10G Ethernet for several years. Their data center infrastructure has been primarily architected around duplex OM3 and OM4 multimode fiber (MMF), since most of the switch-port interfaces are multimode 10GBase-SR using the SFP+ transceiver form factor. Consequently, IT staff (both in-house and outsourced) responsible for the installation and operation of data centers are very familiar and comfortable with using duplex patch cords with its associated LC connector in the rack. The LC connector is the most successful optical connector in the market so far, with its characteristic “clicking” sound to confirm proper latching, as well as its simple termination and cleaning.

As these data centers begin their transition to 40G and 100G Ethernet, enterprise IT architects had a choice to make until now …

Neither of the options above is particularly attractive. Ideally, enterprises would like to upgrade their data centers to 40G/100G Ethernet without changing their existing duplex multimode fiber infrastructure being used for 10G Ethernet. Also, many would like to maintain the same supported link distances as 10G Ethernet.

Pluggable optical transceivers with short wavelength division multiplexing (SWDM) technology address this market need. The approach consists of multiple VCSELs operating at different wavelengths in the 850-nm window (where multimode fiber is optimized). The four-wavelength implementation of SWDM is called SWDM4, and these four wavelengths are multiplexed/demultiplexed inside the QSFP transceiver into a pair of multimode fibers (one fiber in each direction, i.e. a standard duplex interface). Each of the four wavelengths operates at either 10G or 25G, enabling the transmission of 40G (4x10G) or 100G (4x25G) Ethernet over existing duplex multimode fiber, using standard LC connectors. Note that this is a similar approach to what is done in LR4 and CWDM4, but optimized for multimode fiber. The block diagram of a 100G SWDM4 QSFP28 transceiver (Figure 1), and the four SWDM4 wavelengths (Figure 2) are shown below. 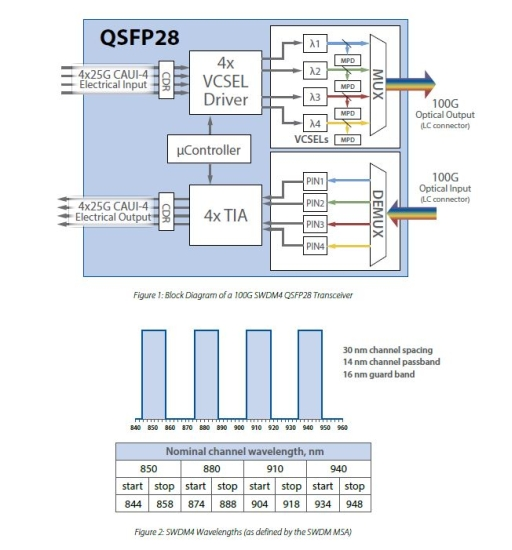 The supported reaches for Finisar SWDM4 transceivers are the following: 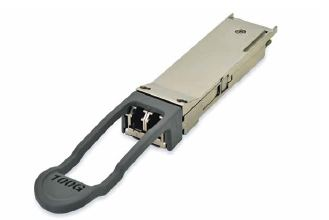 In addition to the “brownfield” application already described, enterprise users who deploy 40G and 100G SWDM4 interfaces instead of parallel optics in their new data centers will require 2 fiber strands per full-duplex link instead of 8. This architecture significantly decreases the capex required for new trunk/structured cabling infrastructure, while still enabling the use of cost-effective multimode trnasceivers.

Some enterprise users who are increasing the size of their new data centers are considering installing singlemode fiber cabling and transceivers due to their need to support longer links. This would mean using relatively expensive LR4 or CWDM4 transceivers using duplex fiber with LC connectors to only support a few hundred meters (CWDM4 is optimized for ~2km hyperscale applications), or using a non-mainstream solution like PSM4, which requires the use of a higher fiber count and the relatively unproven singlemode MPO connector.

However, a new cost-effective multimode solution to address this requirement has been introduced into the market: By using SWDM4 transceivers with the new OM5 wideband multimode fiber standardized by the TIA TR-42 Committee, the supported 40G and 100G Ethernet distances stated above for OM3/OM4 MMF can be extended. OM5 fiber is particularly well-suited for SWDM since it allows wavelengths up to 953nm to propagate to longer distances. Thus:

Besides extending the reach, an additional benefit of upgrading to OM5 multimode fiber is futureproofing the fiber infrastructure for future 200G/400G/800G multimode interfaces suitable for the data center, which may take advantage of SWDM technology.

SWDM technology is not a single-vendor, proprietary solution. A group of companies including optical transceiver suppliers, fiber and cabling vendors as well as system OEMs have formed the SWDM Alliance and the SWDM MSA. Their goal is to promote the use of SWDM technology on duplex multimode fiber, as well as to ensure optical interoperability among the different vendors’ SWDM offerings.

SWDM is a new multi-vendor technology that promises to provide the lowest total cost solution for enterprise data center upgrades to 40G and 100G Ethernet, by enabling the use of the existing 10G duplex OM3/OM4 multimode fiber infrastructure. It also enables a cost-effective approach to increasing bandwidth density for new data center builds, as well as extending the reach when used with OM5 wideband multimode fiber.