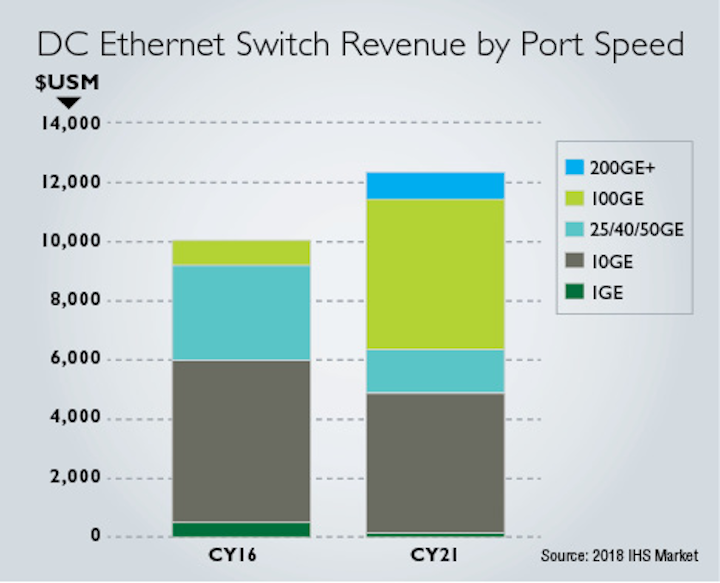 IHS Markit forecasts 25/100GE ports shipped to rise to 46 percent combined, and 10GE to decrease to 46 percent by 2021, as customers migrate from 10GE to 25GE server connections, and 100GE ASPs decline, making them more viable options for large and small cloud service providers (CSPs) to deploy. The continued adoption of 25GE between servers and ToR switches will push adopters of 25GE to upgrade to 100GE for interswitch connectivity, adds the analyst, nothing that this shift is now underway in the enterprise. 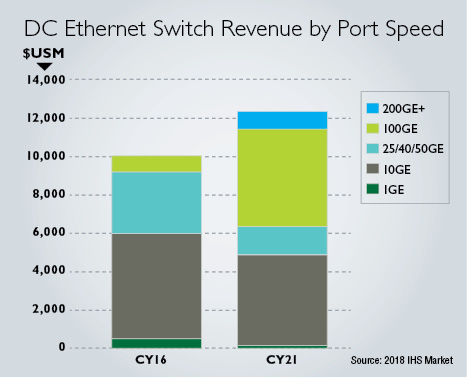 “The market for 10GE/40GE has seen a shift with ASPs [average selling prices] falling rapidly; the number of ports shipped is also slowing, with revenue growth of 10GE and 40GE port shipments following unit shipments,” explains the analyst. “CSPs are the earliest adopters of higher speeds and pave the way for use of higher-speed technologies. Large DC cloud environments with high compute utilization requirements continually tax their networking infrastructure, requiring them to adopt high speeds at a fast rate, ultimately resulting in the lowest $/1GE ratios.”

Further up the protocol stack, IHS Markit expects trials for 200/400GE to begin in 2018, with the need for greater than 100GE speeds resulting in production shipments beginning in 2019, with revenues to reach approximately $1 billion by 2021.

“We believe 200GE will be deployed first, yet have a short shelf life, as 400GE is expected to follow closely behind and will become the primary choice going forward,” comments Cliff Grossner, Ph.D., senior research director and advisor for the Cloud and Data Center Research Practice at IHS Markit. He adds, “The gap in time will be solely determined by how long it takes for the higher speed to become production-ready with adequate supply. CSPs will be the main customers for 200/400GE as they transition from 100GE, in an effort to satisfy increasing high-bandwidth demands.”

The data center evolution: How to overcome its cabling challenges

It all comes down to reach, but on the way there, there’s a lot more to consider—like wave-division multiplexing, parallel optics, MSAs, leaf-and-spine, and insertion loss.
Patrick McLaughlin
Jun 1st, 2018