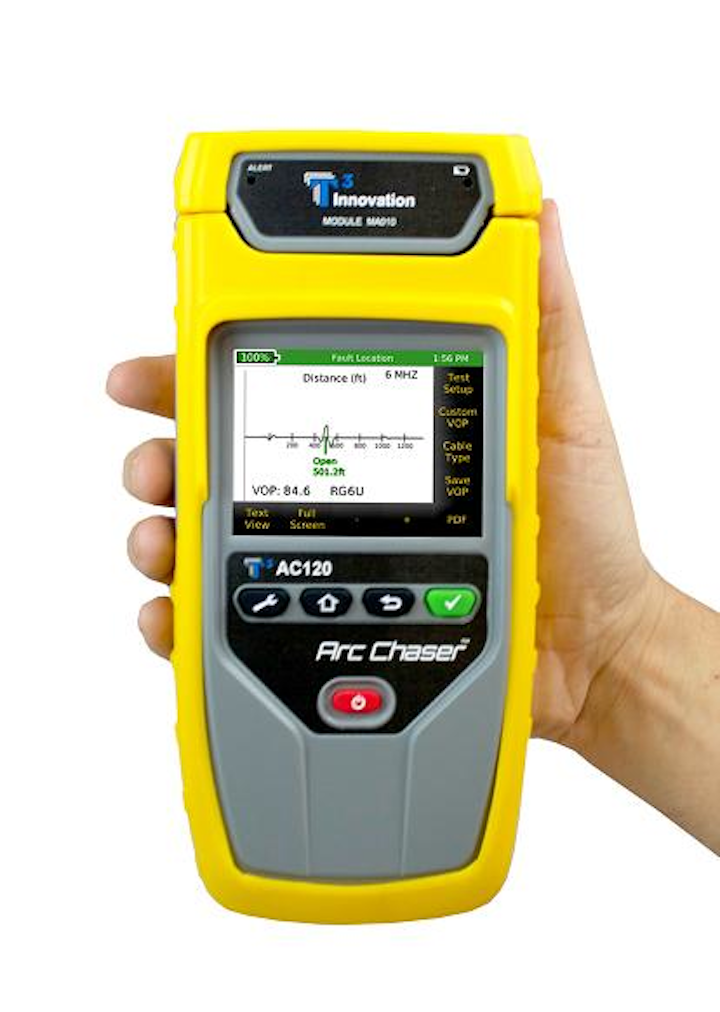 By Mike Outmesguine, T3 Innovation -- Between two buildings filled with telecommunications equipment stands an organic farm, a service road, an expansive ocean view, and one kilometer of undocumented conduit. Red flags in the dirt marked its location. We were on a mission: Find a wiring fault buried up to 8 feet underground somewhere along a 2,700 foot 25 pair copper telephone cable. On the cable, only 7 of the 25 pairs were capable of carrying a reliable digital phone signal. Most of the lines toned all the way through, so we suspected a single fault where most of the conductors became stripped, cut, and/or shorted from a single event. Perhaps the fault was caused by rodents, construction work, or earth movement, and likely occurred within the pull box itself.

Previous scouting missions revealed the path and depth of the cable; measuring distance on Google Earth showed an estimated distance. Walking the line revealed a few pull boxes, but we found no splices on the line, and the pull boxes we found were too far apart -- meaning a non-zero number of pull boxes were grown over or buried somewhere between the phone room and the outbuilding punch-down block. Maintenance folks considering digging spot holes between pull boxes to cut into the cable for spot testing using a tone generator and ohm-meter -- a destructive and time-consuming process, and one that would introduce more splices into the cable creating the potential for future issues with those splices. Additionally, the functioning phone lines were all in use 24/7 for dial-up telemetry, DSL networking, PBX telephones, and analog fax. So our problem boiled down to this: How could we test the cable while avoiding downtime?

Enter T3's Arc Chaser Testing & Monitoring SSTDR instrument, an easy-to-use, handheld cable tester with few buttons, a large LCD screen, and the ability to scan inside cables, while the cable is in use. The unit's integral Time Domain Reflectometer (TDR) is used to test for cable length, faults, junctions, and other impedance changes. Often compared to radar, TDR devices send a pulse down the cable while checking for reflections. Those reflections tell a story. For example, say a reflection is received 50 nanoseconds after the transmit pulse; the TDR will observe the time delay and convert that into distance displayed in feet or meters. Typical TDR testers require that a cable under test be disconnected on both ends for a proper test due to signal interference and, on high voltage cables, to avoid damage to the tester itself. The Arc Chaser is unique among TDR devices as it includes Spread Spectrum Time Domain Reflectometry (SSTDR), a technology that allows the signal pulses and reflections to be observed on live cables.

Spread spectrum signalling prevents interference caused by operating equipment such as telephone, networking traffic, even high voltage power lines. The Arc Chaser can monitor live wires up to 600 Volts. At our jobsite, the unit reported an open AND a short condition at 1,309 feet from our test point at the outbuilding. Testing from the phone room revealed the same type of fault at a distance of 1,410 feet. Adding these two numbers together confirmed the length of the cable -- 2,719 feet -- which was nearly identical to the full estimated and TDR-measured cable length. We found our fault! No digging, no downtime. With these test results, maintenance could now dig for the fault, or cut into and bypass it entirely.