A roundup of recent ICC Elite Installer success stories as recorded by the company. 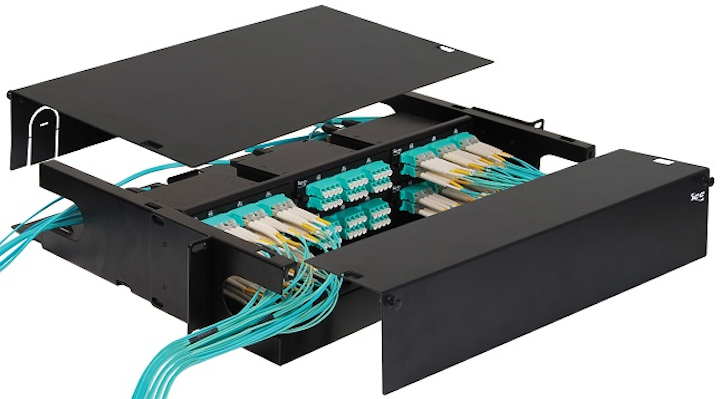 Here's a roundup of recent ICC Elite Installer success stories as recorded by the company:

-- On March 13, ICC reported that one of its Elite Installers located in Menomonie, WI, won a project to install an ICC structured cabling system into a newly constructed building. The system was required to support network equipment and devices with high-speed 10 Gigabit Ethernet performance. The installer elected to choose Category 6A and fiber-optic cables and connectivity and, on the job, pulled 75,000 feet of Cat6A cable from the telecommunications room to the workstations. J-Hooks were installed along the walls and ceilings to help route the cables to their designated locations. Most of the outlets in the work areas consisted of 2-port faceplates configured with Cat6A keystone jacks. In the telecommunications room, the installer mounted 48-port Cat6A patch panels along with cable management panels onto several 7-foot distribution racks. A high-density style fiber-optic enclosure, capable of supporting up to 96 LC or 48 SC fiber-optic connections, was also installed on the racks. A fiber-optic enclosure configured with 24 SC fibers was installed onto a wall in a separate location. This provided a distribution point for feeding fiber-optic cables to other zones. Significantly, since the installer’s purchase of ICC products exceeded $10,000, they qualified to receive 2% of their cost back from ICC in rewards.

-- On Feburary 11, it was reported that an ICC Certified Elite Installer located in New York state won a project to install an ICC structured cabling system for a major hotel in Madison, Ohio. The 54,000-square-foot hotel occupies two acres and features an indoor pool, fitness center, meeting room, and 80 guest rooms. The cabling system was installed as a channel link using 96,000 feet of Category 6 riser-rated cable, 1100 Category 6 keystone jacks in the outlets and patch panels, and 400 Category 6 patch cords. The installation's keystone jacks were purchased in 400 packs, which included a free JackEasy termination tool from ICC. Using this tool helped technicians reduce the amount of time spent punching down jacks. In addition, 400 J-Hooks were used to route cables within the ceilings. The installer qualified for 2% of their costs back in rewards because they are a member of ICC’s Elite Installer Program, and their purchases of ICC products exceeded $10,000.

-- On January 25, the company reported that one of its Certified Elite Installers located in Iowa was hired by a major hotel to install an ICC structured cabling system. From the telecom room to the guest services counter and the guests’ rooms, the installer pulled 100,000 feet of Cat6 cable and installed over 400 Cat6 drops. To support data transmission over long distances, they added an enclosure with 36 fibers of LC single-mode connectivity. The installer purchased ICC ValuePacks to save money; keystone jacks in 400-Pack, patch panels in 6-Pack, faceplates in 25-Pack, and J-Hooks in 25-Pack. They were also qualified to earn 2% back in rewards because they are a member of ICC’s Elite Installer Program and their purchases of ICC products exceeded $10,000.

To learn how to become an ICC Certified Elite Installer, visit icc.com/Elite.