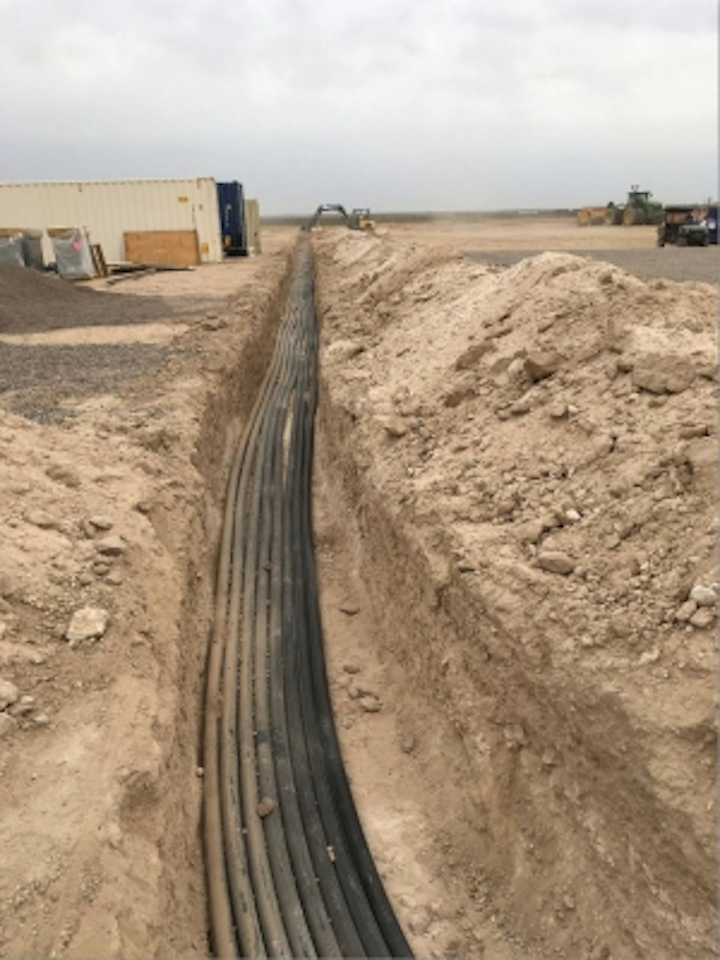 More than 8700 feet of cable in conduit from Southwire was installed to support housing units for oilfield workers in Mentone, TX. The installation won Project of the Year from the Plastics Pipe Institute.

The installation of more than 1.5 miles of power cable in dry Texas soil won the Plastic Pipe Institute’s project of the year award. The installation comprised more than 8700 feet of cable-in-conduit (CIC) from Southwire Company. The CIC provided power to new housing units for oilfield workers in the town of Mentone, TX—population 19. Mentone is located just north of the Mexico border.

In the Mentone project, the ground was trenched and multiple runs of high-density polyethylene (HDPE) CIC were laid next to each other. The installation transitioned to PVC pipe for stub-ups into housing panels and vaults.

“This was a case where CIC enabled the crew to spend as little time as possible doing the installation,” said Tony Radoszewski, president of the Plastics Pipe Institute, a North American trade association representing all segments of the plastics pipe industry. “This was imperative as the temperatures during the project could be more than 100 degrees. Having the cable already in the conduit literally saved lives because the crew didn’t have to spend hours threading the power cable through the conduit. Additionally, HDPE conduit is well-known to be able to stand up to harsh environments and for protecting the cable inside. We were very pleased to present the PPI Project of the Year award to Southwire.”

The contractor on the project, Pearland, TX-based Davidson Electric Company, expressed being impressed with the time and cost savings that CIC enables. Davidson’s vice president Vick Cook, PE, commented, “It was not all about cost savings. CIC allows you to do things you cannot do with PVC and building wire. Mostly, it’s about time spent on site. Our guys are usually working out of town, which means there’s travel cost and a per-diem tacked onto every hour of labor. In addition, how long the ditch is open is a critical issue.”