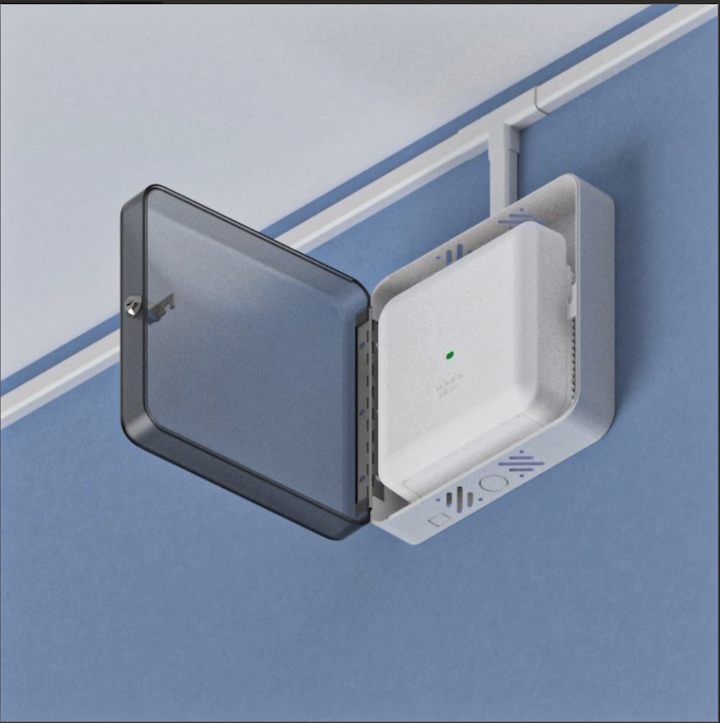 The Telecommunications Industry Association’s TSB-162-A document advises users to consider the maintenance and security of access points, and recommends using an enclosure where physical security is a concern. Enclosures used for these applications should have metal housing, hinged doors, low profiles, and should provide knockouts for cable egress.

As consumers, we experience every day how important WiFi connectivity is. It’s not a great revelation to say that WiFi availability has become vital to both businesses and consumers alike. Wireless technologies have come a long way since the 1990s, when one of their primary applications was connecting a PC in a telecommuting setup.

Today, with endless types of client devices, we have all come to expect not only an instant connection, but also a fast, reliable, uninterrupted connection on all of our client devices simultaneously. And for enterprise networks, WiFi has become critical in nature.

For several years, cabling port counts for traditional local area network (LAN) equipment has been in decline, leading to a greater reliance on the WiFi network. New connections join the WiFi network daily, which drives the demand for robust WiFi infrastructures.

In this article, we’ll look at trends and forecasts for WiFi deployment, discuss what WiFi 6 is, examine cabling infrastructure design considerations, and review recommendations for installing and placing WiFi access points for optimal performance. 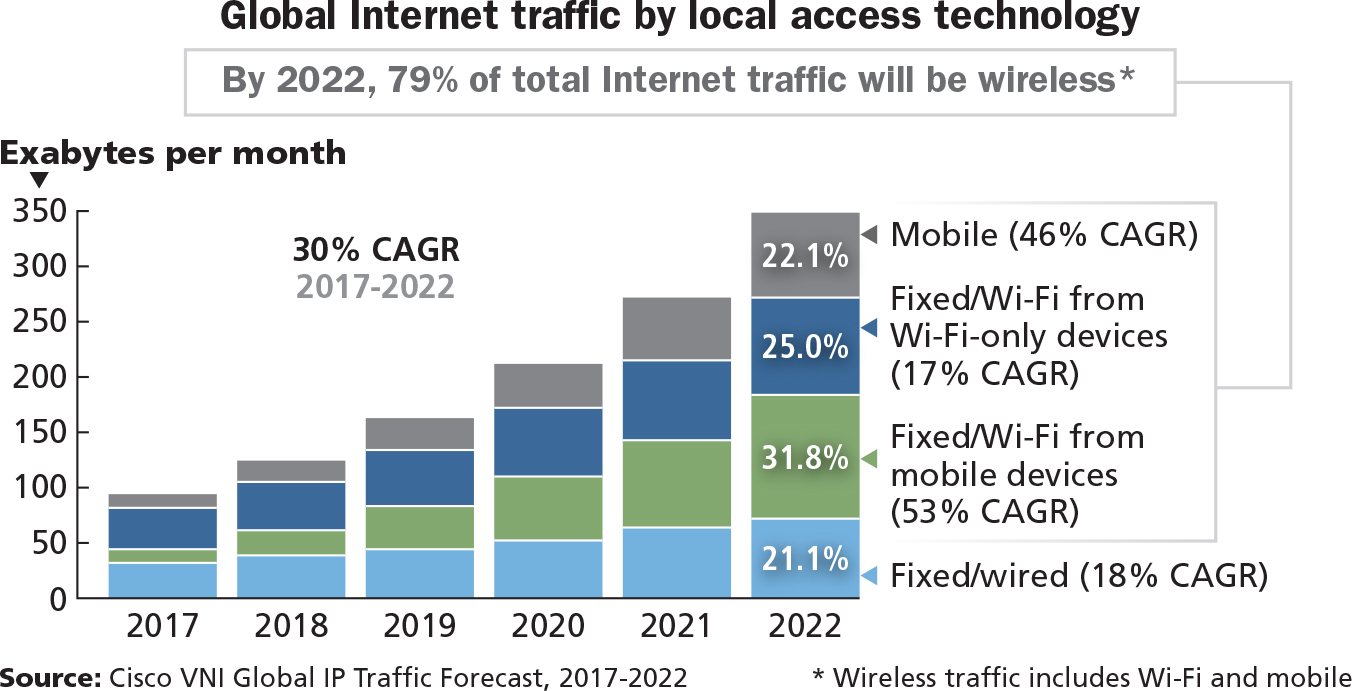 According to Cisco’s Visual Networking Index report, WiFi and mobile devices will account for 79 percent of internet traffic by 2022. The report also says that WiFi connection speeds originated from dual-mode (WiFi and cellular) mobile devices will more than double from 2017 to 2022.

It’s no secret that the Internet of Things (IoT) continues to penetrate the market, with an abundance of smart devices that are saturating networks. Among the evolution of smart devices, new technologies also have become available for transporting countless forms of information. Communications protocols, applications, and IP-enabled devices are using technologies such as Bluetooth, Zigbee, WiFi, small cells, in-building distributed antenna systems, wired LANs, AV sensors, and emerging Light Fidelity (LiFi) technology. It is important that the design and provisioning of the wired and wireless infrastructure be able to accommodate present and future systems and applications.

The Cisco Visual Networking Index (VNI) is a technology forecast that has proven to be relevant in the industry. The 2017-2022 VNI report details WiFi trends, showing that WiFi networks are providing more mobile capabilities on par with wired networks. According to the report, WiFi connection speeds originated from dual-mode (WiFi and cellular) mobile devices will more than double by 2022 globally. The average network connection speed, which was 24.4 Mbits/sec in 2017, will exceed 54.2 Mbits/sec by 2022.

WiFi network use continues to gain momentum; with that said, WiFi infrastructures are becoming saturated.

Before we dive deep into WiFi 6 as a game-changer, let’s look at some potential issues that might be apparent with WiFi as we know it today. Even though 802.11 speeds have continued to increase since 1997, high-density environments in particular are experiencing congestion due to the amount of client devices connecting to the WiFi network. So the efficiency of the networks’ MAC (media access control) layer drops as more clients join, causing increases in medium contention and overhead contention. And according to Cisco, each successive generation of cellular (2G, 3G, 4G) has offloaded more and more traffic onto the WiFi network because of WiFi’s superior speeds and economics.

So what, then, is WiFi 6? It is the IEEE 802.11ax standard, which was published in 2018 and is called WiFi 6 by the WiFi Alliance. WiFi 6 will service higher client densities and more mobile applications, more efficiently, than previous-generation standards. A primary objective of WiFi 6 is to improve overall capacity, versus peaking individual client speed.

Unlike its predecessor 802.11ac, 802.11ax (WiFi 6) operates in both the 2.4-GHz and the 5-GHz bands. Additionally, 802.11ax is amenable to channel bonding, which enables individual client-device throughput to rise substantially by using wider channels.

802.11ax features a simultaneous multi-user feature called OFDMA—orthogonal frequency division multiple access. The complex OFDMA feature can be described in simple terms as carving up the channel dynamically into multiple, smaller subchannels. OFDMA takes place at the network’s MAC layer as well as the PHY (physical) layer. It allows send and receive traffic from multiple clients on a single channel, simultaneously.

The previous-generation WiFi standard, IEEE 802.11ac, introduced MU-MIMO—multi-user multiple-input multiple-output transmission. Via MU-MIMO, 802.11ac permitted 4 transmit/receive (TX/RX) antennas. 802.11ax permits up to 8 TX/RX antennas. That means 8 clients can transmit and receive from one access point (AP) simultaneously. Integrating this number of antennas into the AP could increase the size of the AP as vendors roll out their 802.11ax/WiFi 6 product portfolios. Larger APs will demand new ways to physically mount them.

Further, 802.11ac specified operation in the 5-GHz band only. 802.11ax specifies operation in the 2.4-GHz band as well as the 5-GHz band, allowing for lower-speed legacy devices and systems to operate in the network without slowing down high-speed data transfers. And 802.11ax is more amendable to channel bonding, so individual client-device throughputs can go up substantially using the wider channels.

With all its features and benefits, WiFi 6 is creating smarter WiFi networks with a focus on network efficiency, traffic management, and the ability to service higher client densities. These attributes will be particularly beneficial in venues including airports, educational campuses, shopping malls, stadiums, citywide WiFi networks, corporate networks, multi-dwelling facilities, theme parks, dense suburban areas, and healthcare. WiFi 6 will be a significant benefit in these applications because it will mean the following for client-device users.

Remember that 802.11x, or WiFi 6, is not a single technology; rather, it incorporates a group of technologies. Some of these technologies are for mobile features, some are for IoT features, and so on. The overall goal of 802.11ax is efficiency, with OFDMA as the main driving force.

While WiFi 6 will deliver the benefits previously listed for client-device users, it also will present the following new characteristics for network designers and installers.

To help establish suitable guidelines while planning for WiFi access-point installation, relevant documents have been developed and are available. For example, the Telecommunications Industry Association’s Telecommunications Systems Bulletin TSB-162-A is titled Telecommunications Cabling Guidelines for Wireless Access Points. Among the guidelines in the TSB are to provide at least one Category 6A cable to each access-point location. Additionally, horizontal cable should be terminated at the equipment outlet, then a patch cord runs to the access point. TSB-162-A also recommends placing a telecommunications enclosure in the ceiling panel for locked security. The document accepts an in-the-grid ceiling mount, with the antenna unobstructed by ceiling tiles. The TSB also accepts local (AC) power or remote (PoE) power.

In December 2017 BICSI released ANSI/BICSI 008-2018, Wireless Local Area Network Systems Design and Implementation Best Practices. Section 7 of the standard covers wireless LAN infrastructure design; Section 7.5 is titled Cabling. It is divided into 7.5.1 Backbone Cabling and 7.5.2 Horizontal Cabling. Among the requirements in subsection 7.5.2.2 is that the horizontal cabling supporting access points and antennas should follow all application standards and recommendations, including ANSI/TIA-862-B, TIA TSB-162-A, and ISO/IEC 11801-6. Additionally, balanced twisted-pair cabling, at a minimum, should be Category 6A/Class EA performance level. If optical fiber is installed, it shall be at minimum OM3 performance level. ANSI/BICSI 008-2018 suggests that a minimum of one dedicated horizontal cabling link should be provided for each wireless access point or antenna. And for future growth as well as new technologies, the standard recommends two horizontal cables for each access point.

Subsection 7.5.2.3 explains the reuse of the existing cabling plant. This section states that while the easiest solution for upgrading wireless LANs is to just replace the access point and the equipment in the equipment room—but not upgrade the existing cabling plant—this section of the BICSI 008-2018 standard explains that older cabling infrastructures can impair future expansions or reconfigurations. Additionally, choosing not to upgrade older cabling may hinder network performance and result in lower network availability and reliability. So the decision to reuse the existing cabling plant when upgrading wireless LAN systems depends on a number of factors, listed here. This section of the BICSI 008-2018 standard lists these few:

The standard also mentions the use of a hybrid or composite optical-fiber cable with copper conductors. The standard states that this type of cable can be employed for extended distances while offering power at the device end through the copper conductors. This type of “sheath-sharing,” however, is subject to restrictions based on local codes, manufacturer requirements, AHJ enforcement, or any number of other characteristics.

The remainder of this article is dedicated to recommendations for installing and placing access points for optimal performance.

With the demand for robust WiFi infrastructure, and the volume of access points that will be deployed within and around a single facility, there is clearly a need to think about the method of access-point deployments. Perhaps there also are new considerations that did not exist years ago.

For example, due to the amount of access-point deployments, there has been a significant increase in the desire or need to maintain aesthetics in architecturally sensitive areas.

Additionally, it has become important to provide access-point deployments that will help simplify installation and reduce installation time. Remember also that infrastructure security must meet applicable codes and other building requirements.

Many facility owners and architects prefer to either conceal or blend the WiFi access points and cabling components into the environment, especially in an architecturally sensitive area. As access-point technology advances, it is apparent that the form factor of the access point is changing.

For example, IEEE 802.11ax access points may have as many as 8 transmit/receive channels, which doubles the number of antennas of prior-generation access points—as mentioned earlier, potentially resulting in larger access points. The challenge in these cases, in which larger access points are specified, is to provide the desired appearance without compromising performance.

Remember that TSB-162-A advises to consider the maintenance and security of access points, and recommends the use of an enclosure where physical security is a concern.

An enclosure used in these applications should be made up of metal housing, hinged doors, and a low profile for aesthetics. The enclosure should provide knockouts for cable egress, and should include suitable brackets for wall- or ceiling-mounting.

Bear in mind that hardware is available that enables installers to mount access points in the preferred horizontal orientation. Doing so will take full advantage of an access point with integrated antennas, and access point manufacturers always recommend the horizontal mounting position.

To lower the overall cost, the system design should consider both initial installation cost as well as operational support and costs. Operational costs most often comprise maintenance, serviceability, and upgrades.u

Common Ground Alliance’s DIRT Report said bad excavation practices was the most common cause of these accidents.
Sep 27th, 2018

Innovation in the pathways: Distribution and routing equipment honored at awards ceremony

Products and systems that support cabling through the pathways and spaces of user environments took home honors at the 2018 Cabling Innovators Awards ceremony.
Sep 11th, 2018

The combination of Esticom and Tigerpaw One enables technology service providers to automate takeoff and estimating construction projects.
Jul 13th, 2018

The 3-cell Vis Divide includes fabric dividers molded into the conduit to provide 3 pathways in a single conduit.
Jun 29th, 2018