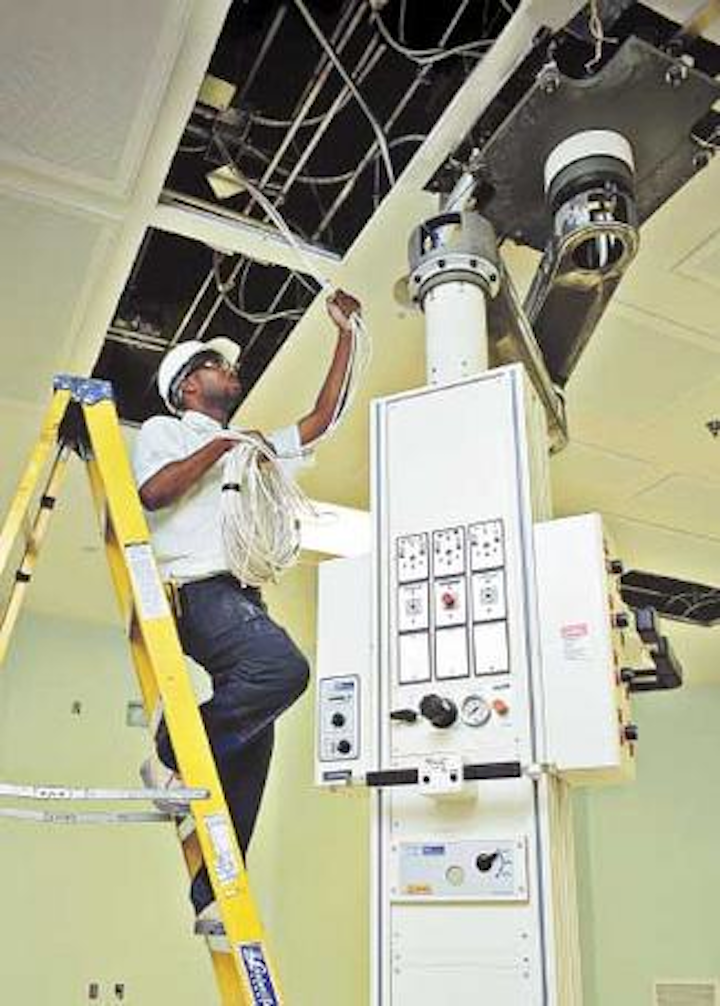 If you've been closely following the code-making process leading up to the 2005 edition of the National Electric Code (NEC), or if you follow this magazine's "Ask Donna" column, you're aware of the significant November 2003 NFPA Standards Council decision—a series of controversial proposals to redefine air-handling spaces and create (limited combustible) air duct cable. These are to be addressed by the Technical Committee (TC) on Air Conditioning in the 2005 edition of NFPA 90A Standard for the Installation of Air-Conditioning and Ventilating Systems.

The proposed changes may have you wondering what changes in the 2005 NEC will affect the cabling industry and what will happen to the air duct cable issue. "With the decision to bring the air duct cable proposals over to NFPA 90A, one main issue remains in the 2005 NEC that will affect our industry," says Bob Jensen, BICSI's representative to NEC code-making panel 16 (CMP-16), and standards development and technology manager for Fluke Networks (www.flukenetworks.com).

According to Jensen, the 2005 NEC will require communications cable to be installed per NFPA Article 300.11, which states that cables and raceways shall not be supported by ceiling grids. "The code originally stated that cabling must be done in a workman-like manner, which was very interpretive," says Jensen. "We wanted to ensure that firefighters, technicians, and anyone else needing to access the ceiling space can do so without cables being in the way, while preventing additional weight added to a ceiling system that is not intended for this purpose."

Not so vague anymore

Running cable over the ceiling grid may be the easiest solution for systems that require limited amount of cables and are installed after initial occupancy, but according to Jensen, it is not proper installation. "While some felt that adding just a few cables supported by the ceiling grid is not a detriment, Article 300.11 allows for overall better installation practices." Although NEC articles regarding abandoned cable will not see noteworthy changes from the 2002 version, Jensen notes that following the Code on abandoned cable is imperative: "Some of the older cables are very toxic, and leaving them in the plenum spaces creates a fuel load."

While the 2005 NEC will not have an immediate major affect on the cabling industry, the debate over air duct cable has only just begun.

The 2005 NEC was to be voted on in Salt Lake City in late May and published by September. "However, NFPA 90A is only in the initial balloting phase with no published information yet," says Tom Guida, member of NEC CMP-3 and Underwriters Laboratories' (UL) principal engineer for communications cable (www.ul.com). "Until the proposed changes on air duct cable are squared away under 90A, it's going to be quite a year of debate and discussion."

Despite the NFPA Standards Council's decision on the NEC leaving the air duct cable issue up to NFPA 90A, some are taking no chances. "You never know if someone doesn't respect the authority of the Standards Council and decides to stand up on the voting floor in Salt Lake City and make a motion to put the air duct proposals back into play," says John Moritz, Jr., member of the TC on air conditioning and industry consultant (www.jmme.com). "While the chance of that happening is slim, the acceptance of that type of motion could result in acceptance of the proposals." Moritz was hoping for many representatives on the voting floor to vote against such a motion if it were to occur.

According to the November '03 Standards Council decision, "Following the issuance of the next edition of NFPA 90A, the NEC can make any necessary correlative changes either through its next revision cycle or through the processing of a Tentative Interim Amendment to the NEC." Moritz, along with many others, is extremely concerned about the possibility of air duct cable being adopted into the NFPA 90A code.

"If the proposals submitted to NFPA 90A are implemented, and ultimately accepted by NEC in 2008, by 2009, the PVC and polyolefin [polyethylene] resin industries in plenum wire and cable—in other words, CMP cable—will be gone," warns Moritz. In 2000, the volume of PVC and polyethylene resins in wire and cable equaled 46% and 39% respectively, while fluoropolymers utilized for the fluorinated ethylene propylene (FEP) insulation and jacketing of air duct cable only accounted for 4%.

"In an economic analysis, we predict that if air duct cable is code-specified, replacing CMP cable for air handling spaces, 93% of today's plenum cable market disappears for the PVC and polyolefin industry," says Moritz. "This will have a huge effect on the entire industry: manufacturers will have to revamp their operations, the cost of the cable and installation will increase significantly, and building owners and end users will have to pay the price or look to other options."

Industry professionals believe that the adoption of air duct cable into the NEC could mean a big boost for wireless. "I haven't been able to obtain pricing from distributors, but I've heard that air duct cable will cost anywhere from 50% to ten times the cost of today's CMP cable," says Jensen. "If I were a building owner, I would look at wireless as an alternative. We've already seen an increase in wireless deployment, and the adoption of this air duct cable could make it even more prevalent."

The proposals to include air duct cable have stirred up much debate within NFPA regarding the safety, toxicity, and testing of cable. While FEP cable jackets for air duct cable offer exceptional flame resistance, current plenum cable has been around for decades with a high safety record. "The proponents of air duct cable claim there are no specific studies on the safety of plenum cable, but published data has shown a steady decline in fire deaths and property loss since its introduction," says Moritz. "I don't see how anyone can say there's a fire risk that justifies eliminating the current plenum cable when it has been proven safe and effective in its application."

One way in which proponents have sought to include air duct cable is to call out two tests—NFPA 255 Standard Method of Test of Surface Burning Characteristics of Building Materials, and NFPA 259 Test Method for Potential Heat of Building Materials—as the evaluation method for wire and cable instead of NFPA 262 Standard Method of Test for Flame Travel and Smoke of Wires and Cables for Use in Air-Handling Spaces.

"If cable had to be tested to NFPA 255 and NFPA 259, air duct cable made of fluoropolymers would end up being the code-specified cable," explains Moritz. "This has created much debate, and the Technical Committee on Fire Tests recently stated that NFPA 255 is not appropriate for testing wire and cable because wire and cable are not considered building materials."

According to Moritz, proponents of air duct cable will have to come up with another test method if they truly want to eliminate the current CMP-rated plenum cable that is based on NFPA 262 tests.

Toxicity of air duct cable is another concern being debated within NFPA. While FEP does not easily burn, a recent Dupont material safety data sheet shows that overheating of FEP emits toxic fumes. The emitted hydrogen fluoride gas is also considerably more dangerous than the hydrogen chloride given off by overheated PVC jacketing. "Most of the toxicity issues surrounding air duct cable materials are coming from building owners who in the past have remained fairly silent," says Moritz. "In our litigious society, building owners have become increasingly concerned with ensuring that their buildings are safe for occupants."

Limited combustible and plenum cable have co-existed for many years, and most industry professionals believe that codes are not the appropriate place to carry out a marketing battle. "The optimum solution is maintain a choice between the two types of cable," says Jensen.

"While air duct cable may be the right choice for some applications," Jensen continues, "it should be promoted in a marketing effort. Mandating it in the code is not the appropriate method."

With the report on 2005 NFPA 90A proposals available in July and comments due by October, both Moritz and Jensen encourage the cabling industry to become actively involved. "If the industry wants to be responsible, they need to provide comments on this issue," says Jensen. "NFPA is about safety, but before we change the code and do away with plenum cable as we know it today, there must be a rationale—something that shows lost lives or significant problems with the existing cable. We haven't seen any of that."

Speak now, or else?

While no one can say for sure what the future holds, if air duct cable makes its way into 2005 NFPA 90A, there's little doubt that the NEC will eventually correlate by its 2008 revision or by a temporary interim amendment. "If installers, designers, and manufacturers in the cabling industry don't realize at this point the real probability that four years from now today's NFPA 262 PVC-based CMP-rated cable could be completely gone, then they have their heads in the sand," says Moritz. "I would encourage that significant group of people to make their collective voice heard by issuing comments to NFPA 90A by October, joining NFPA by November, and attending the spring 2005 meeting to vote in favor of retaining NFPA 262 plenum cable."

The 2005 NFPA 90A final voting will take place at the World Safety Conference & Exposition in Las Vegas, NV June 6-10, 2005. For more information on becoming involved and to comment on NFPA 90A proposals and voting, visit www.NFPA.org; or, contact John Moritz at: johnm@jmme.com

Betsy Ziobron is a freelance writer covering the cabling industry, and a regular contributor to Cabling Installation & Maintenance. She can be reached at: bziobron@comcast.net