The National Electrical Contractors Association (NECA-www.necanet.org) is proposing that the Construction Specifications Institute (CSI) incorporate an "Integrated Building Systems" specification into the next issue of its MasterFormat 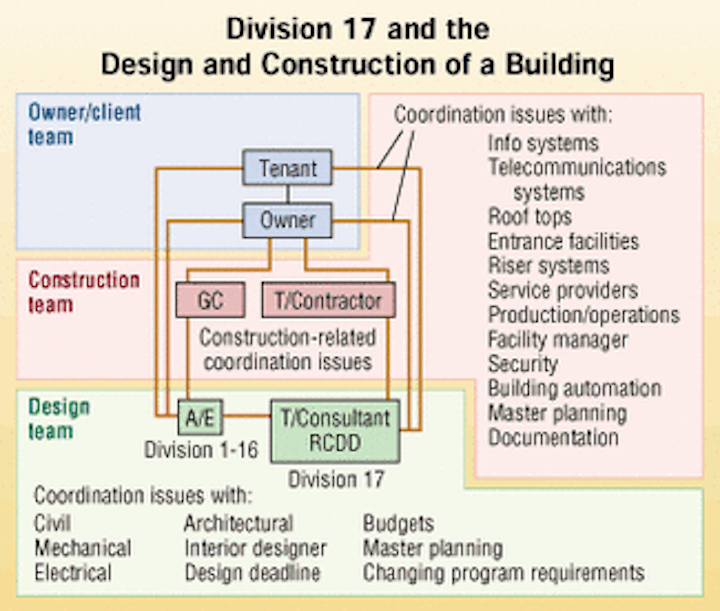 The National Electrical Contractors Association (NECA-www.necanet.org) is proposing that the Construction Specifications Institute (CSI) incorporate an "Integrated Building Systems" specification into the next issue of its MasterFormat.

Co-produced by Construction Specifications Canada (CSC) and the CSI, the MasterFormat is a master list of numbers and titles for organizing information about construction requirements, products, and activities into a standard sequence known as "Divisions." In the past, 16 divisions have been used, ranging from recommendations on doors and windows to electrical. Architects and other design professionals use this MasterFormat to organize the requirements for a new building or renovation project.

"Building systems are converging, and the trend is toward the integration and interoperability of all components and technologies," says Thomas Glavinich, professional engineer (PE), chair of the University of Kansas architectural engineering department. "Increasingly, the building is viewed as a whole, and this creates the need to integrate not only power, communications, and control, but also the foundation and structural systems; the building envelope; and heating, ventilating, and air-conditioning systems."

Stauffer explained why grounding, for example, should be integrated into the "Integrated Building Systems" specification. "When grounding is being done by different people working on different systems, stray currents may develop." Stray currents are the major cause of electrical noise. If the grounding work is integrated, "Integrated Building Systems" specification advocates believe that similar problems may be avoided.

NECA's draft proposal explains why those involved in the design and construction process need to promote a "systems approach." Advocates of an integrated Division 16 believe that the fragmentation of specifications for power, communications, and control systems can result in conflicting requirements, lack of technical and physical coordination between systems, and a failure to meet a consistent set of technical requirements. They believe it is important that all of these systems be included in one comprehensive and integrated specification section to promote a system approach to design and construction. This, they say, requires the designer to consider the interrelationships and required interfaces between these systems.

Stauffer summed up NECA's proposal by saying, "Integrate-don't separate. That's the message we're trying to get across to CSI." The next edition of MasterFormat is scheduled for release next year.

A different point of view

Division 17 (www.division17.net) supporters also believe that there needs to be more coordination in the field during the design and construction of a building. "Both parties are saying something needs to change," says Division 17 evangelist Thomas Rauscher, president of Archi-Technology. Rauscher believes the key to the transition is education. Both the construction and the telecommunications industries need to learn about each other.

"The current method of operating (i.e., add-ons during construction) often costs building owners and tenants quite a lot of money," says Rauscher. "Division 17 can ensure that the telecommunications requirements are included in the design." The same specifications, Rauscher says, should be produced for people working at the design, construction, and owner/client levels. In other words, the architectural engineer and the technology consultant/RCDD should coordinate their specifications at the design level, while the general contractor should work in conjunction with the technical contractor at the construction level.