Recabling of Lester B. Pearson Intl Airport far from plain

Information and control are of the utmost importance when moving millions of people and billions of dollars in airplanes and cargo. So it was no surprise when the Greater Toronto Airports Authority (GTAA) began planning major changes to Lester B. Pearson International Airport, named after the former prime minister. The airport is Canada`s busiest and among the top 25 in the world, which is another reason communications was a top priority. 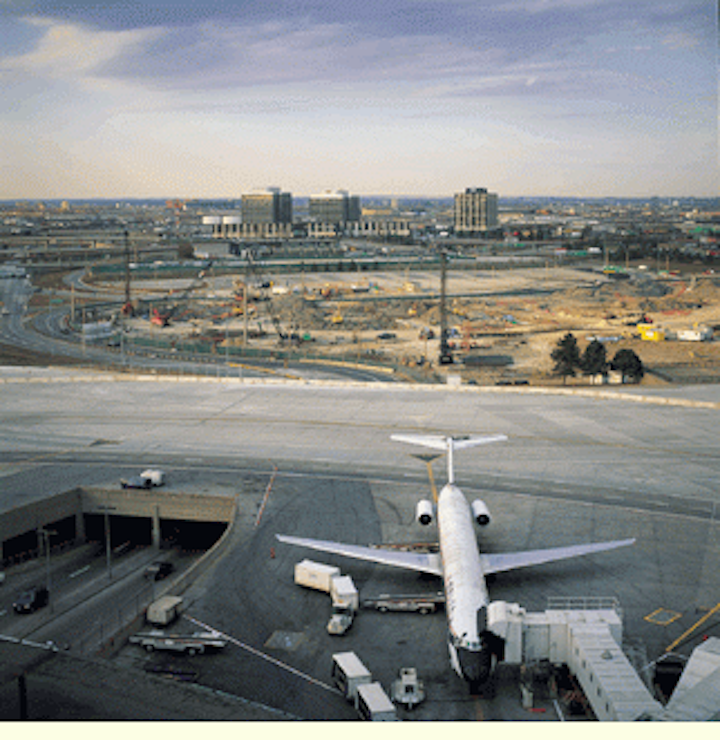 Reliability and security figure heavily in the new design of the revamped network.

Information and control are of the utmost importance when moving millions of people and billions of dollars in airplanes and cargo. So it was no surprise when the Greater Toronto Airports Authority (GTAA) began planning major changes to Lester B. Pearson International Airport, named after the former prime minister. The airport is Canada`s busiest and among the top 25 in the world, which is another reason communications was a top priority.

A critical contribution to the growth and vitality of Ontario`s capital city, the airport was previously operated by the Canadian Government and was recently leased to the GTAA. Facing the task of increasing passenger traffic and revenue, the GTAA began a comprehensive, 15-year Airport Redevelopment Program in 1997, addressing all aspects of the airport infrastructure. The extensive reconstruction of existing facilities at new locations could have placed existing communications facilities at risk, so it was deemed an ideal time to redesign and rebuild the communications infrastructure as part of the project.

One of the first phases of the project included moving from the existing administration building in preparation for the demolition of one terminal and the construction of a new one. The GTAA administration building, a primary communications center for the entire airport complex, was relocated 3 kilometers away from its original location to make room for a new parking area. This relocation called for rerouting a great deal of optical-fiber and copper cabling, supporting a complex of data systems, security systems, cameras, and radar display feeds--all vital to daily airport operations.

The existing communications facilities had been installed over a 17-year period to serve a variety of needs. Paul Midgley, one of the project managers for the renovation, described the existing facilities as "a mishmash of standards, very inconsistent, and not as well-documented as we would have liked." Some of the installations, he adds, included panels with no labeling and fiber-to-fiber connections with no panels at all. "We saw it as an opportunity to upgrade the entire network and set standards and procedures for the future," Midgley says.

Issues of reliability and security figured heavily in the new design of the revamped network. There had been no serious security problems, but due to the nature of airline travel, security is always a top priority. There had not been an unusual number of failures, but the lack of standardization and documentation could slow response to potential network crashes. Chris Langley and Dave Sage, both electronic-system technologists, agreed that the job facing them would be unique.

At the heart of the project was a 3-km duct bank running from the new administration center to Terminal 2. The duct bank consisted of six 4-inch ducts, reinforced with steel and encased in concrete. Access was gained through a series of secure maintenance holes. From Terminal 2, the network splits to carry traffic to both Terminal 1 and the airport`s power plant.

Concern with security and reliability of the new cabling was perfectly natural, since much of the traffic on the new lines is specifically security-oriented. The network supports a number of security cameras that will ultimately exceed 500 in three terminals. The cameras range from fixed devices for door control to panning rooftop cameras for real-time surveillance. The network also powers fire alarms, card-access systems, and other security devices. Other applications include "apron-control" radar display systems and the PC local area network between buildings.

The high priority of these critical issues can be seen throughout the system, in what Sage describes as "an equipment-in-cabinet philosophy. Many areas are accessible to airport personnel," he says. "It`s the kind of equipment that is normally protected by its location in a locked equipment room. Since we didn`t have that option, we provided security with lockable cabinets." In addition, Sage says much of the equipment is located in heating- and cooling-pipe tunnels. "You never know when a pipe could burst and damage equipment in an open rack," he says. "The waterproof cabinets provide protection against potential leakage."

At fiber entry points, the team specified secure termination/ splice enclosures. In all four buildings--Terminals 1 and 2, the new administration building, and the power plant--the 23-inch FL2000 series equipment from ADC Telecommunications is installed in dust-proof, waterproof, and lockable environmental cabinets. The 23-inch format was something new, according to Midgley. "We were accustomed to using smaller 19-inch racks," he says. "But the 23-inch racks give us space for the cable management we use to manage our patch cables."

The decision to go with ADC was made after a recommendation from a consultant to the airport`s IT department. "We took a look at ADC`s solutions and liked their compactness, cable management, and overall efficiency," Sage says. "They had all the necessary approvals and certifications, so it was a very easy decision."

Planning the installation, on the other hand, was not so easy. Despite the scope of the project, shutting down or curtailing even small segments of the airport`s operation was not an option. Instead, new facilities were installed parallel to the existing ones. Cutovers were generally done at night with, at most, a few seconds of interruption of service. Once the cutover was done, the old facilities were removed. Every step of the operation had to be meticulously planned and carried out.

The planning process covered everything from the kilometers-long cable runs to rack layouts to the parts numbers of individual components. "We weren`t just looking to move," says Langley. "We wanted to upgrade everything about our installations. This airport project is going to continue for years, and we won`t have time to go back and redo things. We`re setting standards and procedures now that will be in place for years to come."

After all the planning, the actual implementation was almost too easy, according to Langley. It did, however, take contractors a little time to get used to the new systems. The cable management, he explains, is very specific in how it works and where things go, which fit well with the emphasis on standardization. "Now," Langley says, "every patch cable is properly dressed. They run up racks, not through them. They are all the same length, with built-in cable-management systems taking up the slack. You can find things when you need them. Once the contractors got the hang of it, they could use the initial installations to train installers for the subsequent installs to make sure we got exactly what we wanted."

Langley admits there were a few problems that couldn`t possibly have been foreseen. To avoid having to excavate a long cable run through a hill, one contractor brought in a remote-controlled directional-boring system. "It had to dig down, run horizontally, and drill back to the surface," he recalls. "I asked how a pipe that is 18 inches in diameter and 250 feet long could be supported simply by welds, and what would happen if it broke during installation."

Langley was assured that the welds would be as strong as the pipe, and that it wouldn`t break. "It broke," he adds. "They ended up having to dig up the hill with a power shovel to mend the broken weld. The other problem occurred during the boring process, when a directional cutting head broke."

There were also some minor but nevertheless unexpected situations that required creative solutions. Despite the emphasis on fiber, the project did involve some copper.

Because some of the older control systems could not be made compatible with fiber, they ordered 2.5 km of 19-gauge, 100-pair copper on a single, 9-foot-tall reel. "We intended to pull it as a single unbroken run until we discovered that it was so stiff that it couldn`t make the necessary bend when being pulled back into one of our maintenance holes," he adds. "We ended up cutting it and splicing all 100 pairs inside the maintenance holes."

The time spent in planning paid off handsomely. Aside from the few surprises, there was only one instance in which a facility was not ready for a scheduled cutover, although Langley was ready and waiting with the cable. That aside, the entire project ran right on schedule. "We would split staff between the existing system in the original location and the replacement system in the new location," he says.

ADC recommended some changes in old procedures, and Midgley says those suggestions made a big difference. "We had always used site-prepared connectors. They suggested that we use factory-installed connectors instead," he says. "The way we were doing it, we lost 0.5 decibel at each connector. Factory connectorization reduced the loss significantly."

Midgley explains that the savings over a number of connectors added up, and the higher loss budget allowed them to reuse a lot of their existing video-transmission equipment. "If we had installed our own connectors, the accumulated loss would have forced us to buy all new video equipment."

With those accomplishments under their belts, Sage says the overall airport fiber and copper-backbone project is about one-quarter to one-third completed. "Before we`re finished, we`ll be running another 4 km of duct bank so when we`re done, the overall installation will be a ring," he says. "We`ll be serving five more facilities, including the central workshops, a de-icing facility, the new west communications hub, and the new control tower." In all, Sage says there will be 288 multimode and 144 singlemode fibers, with smaller runs branching off. "And, of course, there will be a lot more equipment in the administration building," he adds. "It`s going to take five to 10 years to complete."

This first phase of the project creates a partial fiber and copper ring, which now reaches about halfway around the airport. The next phase will continue with the ring linking additional buildings through a large, secondary communications facility. The next two phases will complete the ring encircling the airport and connect six new buildings currently under construction.

The overall sentiment after the one-and-a-half-month project, Sage says, is that recabling Pearson Airport has been very clean. "We can`t help but be impressed with the way it all fits together. It`s very easy to expand by simply adding panels, and we have several options as we grow and change," he adds. "It was the planning that made it go so smoothly. It`s all there: every nut and bolt and every cable tie. With years of this still to come, I can actually say I`m looking forward to it."

The Toronto skyline appears dwarfed by Lester B. Pearson International Airport, which is Canada`s busiest airport and among the top 25 in the world.

The fiber distribution center for the airport is located in an underground tunnel.