Maximizing the advantages of the MTP connector 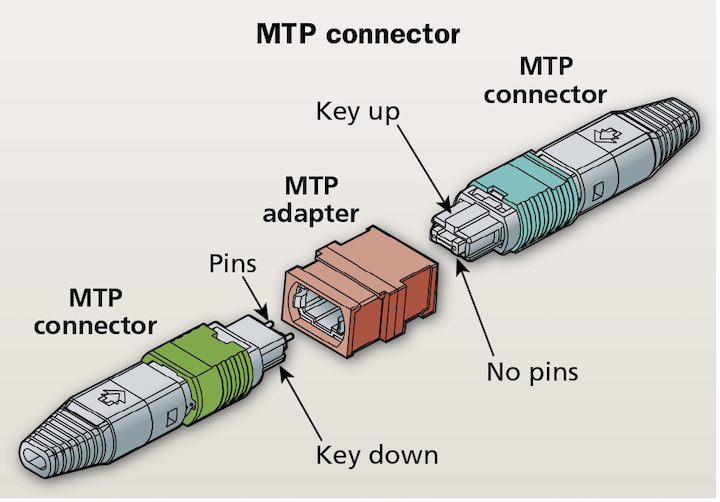 Serving networks since 1996, the MTP multifiber connector is poised to serve higher speeds well into the future.

Editor’s note: This article details the history and performance capabilities of the MTP connector. MTP is a trademarked brand of multifiber push-on (MPO) connector. The article is authored by technical experts from Corning Optical Communications and US Conec—the two companies that jointly developed, offer, and continue to refine the MTP connector. In our Perspective column, we welcome contributions that are opinion-based or technology-specific in nature.

Seasoned industry professionals may recall the excruciating, painstaking days of installing and connecting countless fibers, one at a time. As the number of data centers grew exponentially in the 2000s, designers and installers were tasked with managing hundreds and even thousands of single- and two-fiber connector solutions. To accommodate the high volume of connectors within ever-tighter space constraints, installers and designers were forced to create more-elaborate storage and routing solutions that came with their own sets of challenges.

The MTP connector is a multifiber push-on (MPO) style connector that includes the mechanical transfer (MT) ferrule, which was originated by a Japanese telecom company in the mid-1980s.

Fortunately, those days are long gone—thanks in large part to the emergence of the multifiber push-on (MPO) connector. The MPO format dramatically reduced the amount of time, effort, and space required to install and deploy network technologies, particularly in parallel optic applications.

Even beyond its value in the parallel optics space, a closer look at the MPO format reveals the full scope of its applications. To get a better understanding of big picture and true value of MPOs, we must start at the most logical place: the beginning.

The timing couldn’t have been better. Networks were tasked with transmitting more data, more quickly. As the need for bandwidth increased, the industry began moving toward networks and cabling with higher fiber densities—the multilane highway of data transmission. This heralded the beginning of what is known today as parallel optics, or optical transmission using multiple fibers. Because of the increase in “lanes” used with parallel optics—the number of fibers moving data back and forth—an efficient, high-density interconnect was needed. The MPO connector format succeeded in establishing a compact means to efficiently couple and decouple the high-density MT ferrule format via a bulkhead-mounted coupler. More fibers, however, also meant more installation considerations.

To remedy the installation challenge presented by ever-increasing quantities of fibers, Corning joined forces with US Conec. In 1996, the MTP connector brand—a family of advanced MPO connectors designed for 4-, 8-, and 12-fiber ribbon applications—was released to the U.S. market. That same year, the MPO format was standardized by the International Electrotechnical Commission (IEC) and embraced by an industry thirsty for a better way to install, deploy, and manage high-density fiber networks.

Before the MTP connector came to market, it typically took two installers a full day to terminate and test 144 fibers. With MTP connectors, suddenly installers had the ability to rapidly connect 8 to 12 fibers at a time with the snap of a tool, or using a preterminated plug-and-play cable, trimming a daylong job to just a few hours. To ensure seamless connections, the MTP connector was the first MPO connector to be factory-verified and pre-engineered to proper lengths for the cable plant. This meant that less skill was required for installation, while future updates, additions, and changes to the structured cabling were dramatically simplified. Revolutionary at the time, these advancements introduced by the MTP connector eventually became the industry standard. 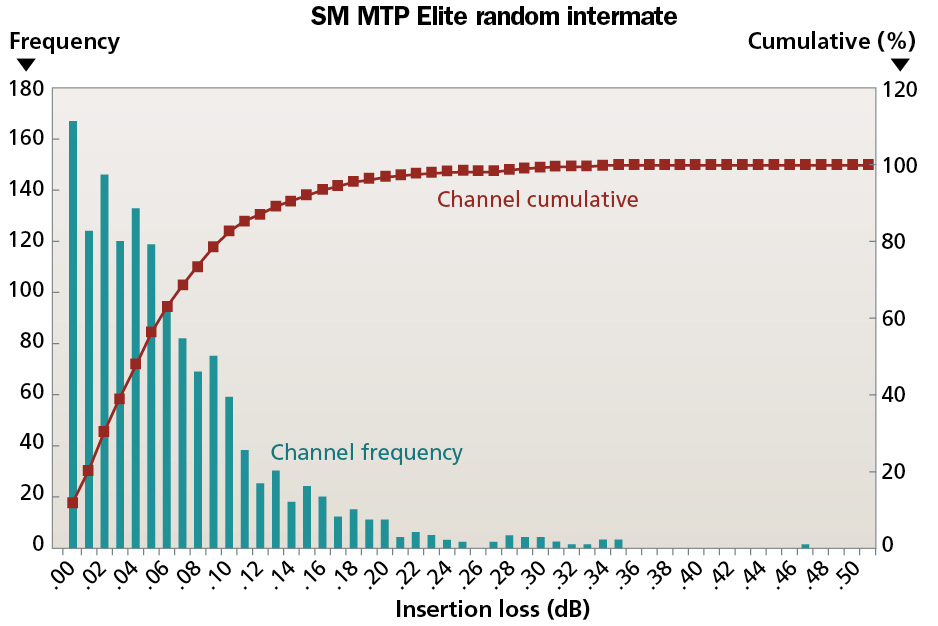 Faster deployment was one thing. But installers also needed a way to fit more fibers into smaller spaces. MTP connectors addressed this challenge as well. Even before parallel optics gained popularity, installers were struggling to provision high-density applications. MTP connectors made it easier to do exactly that. In place of a 1U housing with duplex connections holding 144 fibers, the MTP housing was capable of holding 864 fibers—six times the capacity. This fiber density made MTP connectors especially well-suited for data centers with serious space constraints and/or massive amounts of cables.

Good technology gets even better

With the increasing prevalence of plug-and-play solutions, MTP connectors quickly became the format of choice for data centers, offering an alternative to LC and SC connectors. But the MTP format is more than a niche connector, with advantages that translate across a wide range of technologies beyond parallel optics. Since their launch, MTP connectors have undergone continual improvements that make them the ideal multifiber connector choice for any data center, of any size.

Highly adaptable and flexible, MTP connectors have continued to evolve to meet the emerging needs of installers, data centers, and the organizations that rely on them. Let’s take a brief tour of the key advancements we’ve seen in the MTP format over the past 20 years. 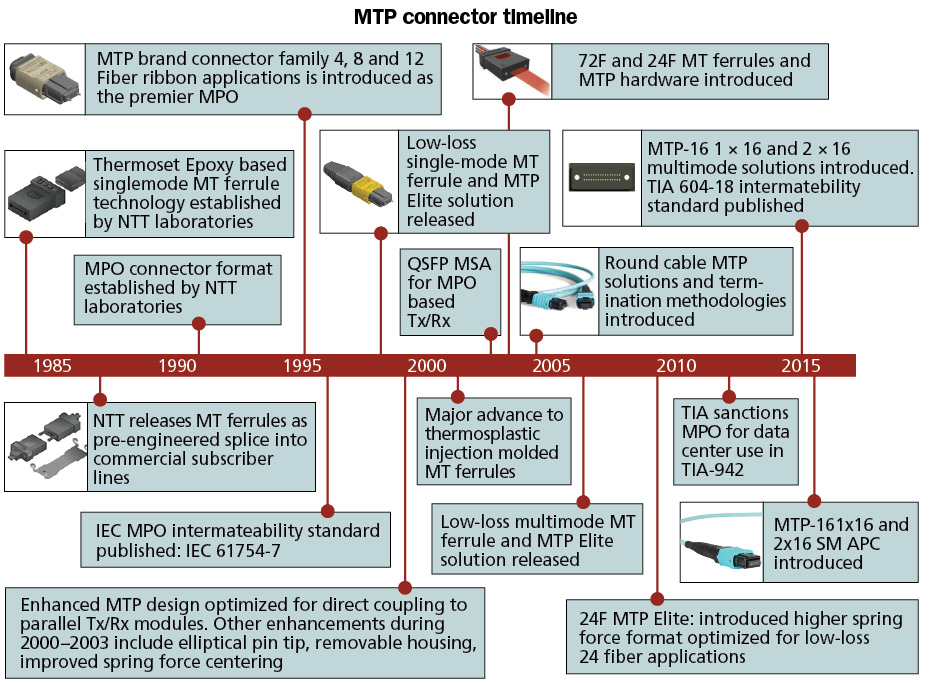 With a history of more than 20 years, the MTP connector’s latest versions are designed to work not only with true fiber-to-fiber connections, but also with a host of other technology and electronics the industry has adopted.

Simply put, installers need their connectors to work. The earliest versions of the MPO connector format could plug in without problem, but accidental bumps to the cable could result in signal instability. Installers welcomed the introduction of the floating ferrule in the MTP connector. The innovative design allowed the ferrules to stay in contact while the connector housings rotated relative to each other. This major step in the MTP connector’s evolution allowed multifiber connectors to provide even more consistent, reliable performance. The floating ferrule feature was particularly important for applications in which the cable plugs directly into an active Tx/Rx device, and was a primary reason the MTP became the connector of choice for emerging parallel optics Tx/Rx applications.

Between 2000 and 2002, additional improvements to the precision of MTP connector components resulted in increased stability and boosted durability performance while continuing to enhance the connectors’ overall reliability. Through empirical studies, engineers optimized the lead-in on the precision alignment guide pins to an elliptical shape. This significantly reduced the wear and tear and debris generation from plugging and re-plugging the connector multiple times. In addition, the internal connector components were redesigned to ensure perfectly centered normal forces between the mating ferrules, ensuring physical contact of all polished fiber tips in the ferrule. Finally, installers had a connection that actually stayed connected.

The MTP reputation for performance continues. Used in a variety of applications, today’s MTP connectors meet stringent Telcordia (formerly Bellcore) standards for carrier-grade demands and decades of use. Millions of MTP connectors installed in the field continue to perform as they did when they were first built in the cable-assembly factory.

Simpler to make and use

In 2002, US Conec migrated MTP’s original thermosetting ferrule technology to polyphenylene sulfide (PPS) thermoplastic injection molding, which is much less susceptible to moisture absorption—a key culprit in degraded connector performance. The adoption of thermoplastic injection moldings also made it possible to quickly scale up production to meet high-volume demand, while also improving control over ferrule endface geometry during the polishing to improve connector performance.

Design improvements to the MTP Elite housing components also made it easier to install, take out, clean, and return to service. This set the stage for future innovations poised to simplify life for installers even more.

We have come a long way since the initial MT ferrule technology used in Japanese telecom networks. But the MTP format is just getting started. Today, the challenge we face is hyperscale, big data, and cloud data centers: How do we provision, add, and support high-density, bandwidth-greedy applications that require massive space to accommodate a massive number of cables? With its ever-improving insertion loss, fiber density, and ease of installation, and its time-tested stability, the MTP connector is ready to meet those demands.

But it’s important to note that the MTP brand isn’t built just for the mega-cloud, big data, and hyperscale computing. The latest versions of MTP connectors are designed to work not only with true fiber-to-fiber connections, but with a host of other technology and electronics across all vertical industries—financial, medical, educational, colocation and more.

So whether you’re working with duplex, 8-, or 16-fiber transmissions, the MTP connector scales to whatever technology you’re using—including new parallel applications such as 400-Gbit Ethernet capable of running across 32, 16, and 8 fibers. With their robust engineering, MTP connectors also perform in a wide range of operating environments, including those with high humidity, extreme heat and cold, and fluctuating temperatures.

Time travel with the MTP

The MTP continues to evolve and improve, as it has for more than a decade.

2004—Engineers increase the MTP connector’s fiber count, packing up to 72 fibers into one format.

2007—A lower-insertion-loss version of the multimode MTP Elite is released.

2010—A multimode version is introduced, allowing up to 24 fibers in one connector.

2015—The MTP 16 format is introduced, accommodating up to 16 fiber connections in a single row.

Soon—A new MTP 16 will be made available in a singlemode version.

With its usefulness in so many different applications with so many different technologies, the MTP connector offers versatility that is definitely an advantage for installers. But this versatility also has presented some challenges. Installers struggle with not knowing whether they need a male or a female end, or with managing polarity when they’re dealing with thousands of fibers that not only have to transmit, but also receive. These issues can delay deployment and rack up hours on the job.

The latest generation of the MTP connector brings novel features and functionality that simplify field configurability. Don’t have the right male or female end on hand? Not a problem. The new MTP connectors make it easy to change gender and polarity in the field, without requiring a specialized skill set or a connector engineer. Along with optimized field configurability, the connectors also feature environmentally friendly performance enhancements that improve the feel of plugging and unplugging.

Since 1996, installers have relied on MTP connectors to speed deployment of data center installations. Now we’ve seen that the advantages of MTP go much further. With their 20-plus-year history of performance, ongoing improvements, and the next generation of advancements soon to come, MTP connectors still deliver exceptional value for a vast range of network technologies. Regardless of the technology you’re working with, make MTP connectors part of your data center buildout. And take full advantage of the time savings, space efficiencies, and simplicity synonymous with the MTP brand.