Multi-gigabit speeds put spotlight on evaluation of installed base

Transmission speeds of 2.5 and 5 Gbits/sec have prompted the development of new methods and tools. 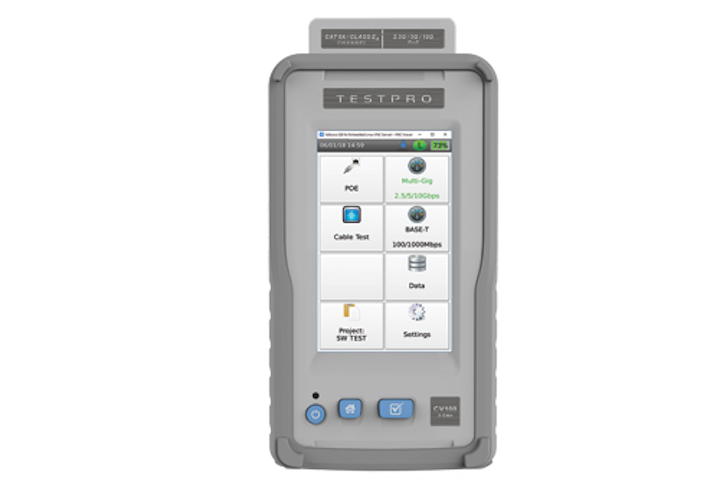 Transmission speeds of 2.5 and 5 Gbits/sec have prompted the development of new methods and tools.

The completion of the Institute of Electrical and Electronics Engineers (IEEE) 802.3bz specifications in 2016 officially launched a standardized method of using Category 5e and Category 6 cabling to support Ethernet transmission at 2.5 and 5 Gbits/sec. Officially titled the Standard for Ethernet Amendment: Media Access Control Parameters, Physical Layers and Management Parameters for 2.5 Gb/s and 5 Gb/s Operation, the standard was approved in September 2016. While that was the official beginning of standardized 2.5- and 5-Gig operation over Category 5 and 6, thanks to the efforts of groups particularly including the NBase-T Alliance, the practicality of achieving those speeds over the installed base of twisted-pair copper cabling became realistic with the alliance’s founding in late 2014.

The NBase-T Alliance didn’t rest with the approval of 802.bz; rather, the group has intensified its evangelism over the past couple years to drive up the penetration of 2.5- and 5-Gbit/sec ports. Peter Jones, distinguished engineer with Cisco Systems, chairs the alliance. In May 2018, Jones collaborated with network-market analyst Alan Weckel to present the online seminar “Growth of NBase-T: Market trends and forecasts.” Weckel is founder of analyst firm 650 Group.

During the presentation, Jones noted that more than 1.3 billion Category 5e and Category 6 outlets, and more than 70 billion meters of Category 5e and 6 cable are installed today. They account for more than 90 percent of the current installed base, he added, emphasizing that NBase-T technology leverages this installed base to the benefit of end-user organizations. Since the introduction of NBase-T, the technology has been regarded as an enabling technology for next-generation, 802.11ac Wave 2 wireless networking. Jones pointed out that the multi-gigabit-per-second capability also can support high-data-rate client PC and workstation systems. 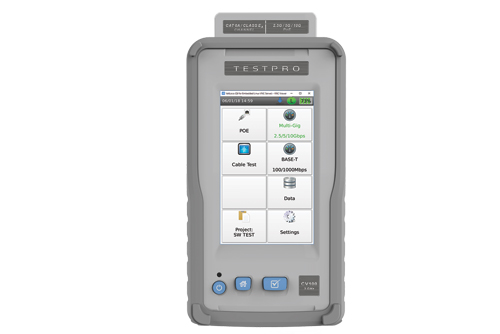 Within weeks of the IEEE’s approval of 802.3bz, the NBase-T Alliance published a paper authored by representatives of several cabling vendors. CME Consulting’s George Zimmerman, CommScope’s Brian Moffitt, Fluke Networks’ Theo Brillhart, and Panduit’s Thomas Kelly collaborated to write “NBase-T Performance and Cabling Guidelines,” which was published in August 2016. That paper introduced the cabling-performance parameter ALSNR—alien limited signal to noise ratio—describing it as “a calculation that combines insertion loss, alien NEXT [near-end crosstalk] and alien FEXT [far-end crosstalk] to estimate the response of the PHY. This determines if the channel has adequate SNR [signal-to-noise ratio] for supporting the new data rates under worst-case conditions.

“ALSNR is calculated from measurements taken the same way that alien crosstalk is currently measured,” the paper continues. “The ALSNR result provides a single numerical value for cabling performance to indicate support for 2.5GBase-T or 5GBase-T. Category 6A is fully specified with more traditional alien limits, and the ALSNR requirement is fully supported.”

In addition to the quality of the Category 5e or 6 cabling and the quality of the practices through which the cabling was installed, the length of cable bundling also affects whether or not installed links meet ALSNR requirements. The paper’s authors continue, “Cables that are bundled together have alien crosstalk (both ANEXT and AFEXT), and longer, tighter and more consistent bundles have more alien crosstalk. Actual installations comprise a number of aspects that must be identified and understood, not only for making an assessment of capability, but also for determining suitable mitigation if it is needed.”

The paper prescribes risk-assessment procedures for determining which channels are at risk of too much alien crosstalk: “An initial assessment can be done by a qualified cabling expert using as-built cabling documentation, test results, and inspections of the cabling. This can be used to determine which channels might need further assessment. Where the risk is higher, field testing may be performed to certify application support.”

The authors created a sample risk-assessment chart that is included in this article. “In general,” they explain, “the longer cables run together in a bundle, the higher the risk to achieving peak performance, but risk can be reduced by implementingmitigations.” 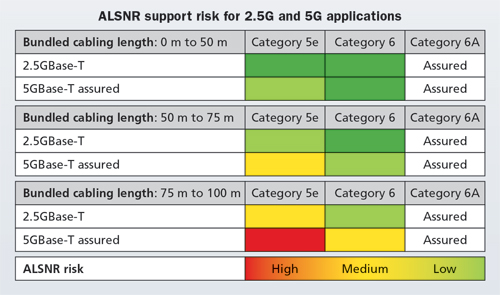 In its document “NBase-T Performance and Cabling Guidelines,” the NBase-T Alliance published this chart. It characterizes the risk that ALSNR poses to an installed cabling link’s ability to support 2.5G and 5G applications.

Another mitigation step offered in the paper is the use of the NBase-T “downshift” capability. The so-called downshift is a capability that could be compared to autonegotiation, but is not specified into the 802.3bz standard. Some NBase-T Alliance members produce equipment with the downshift capability. An NBase-T Alliance paper authored by Cisco’s Ken Naumann and Amrik Bains describes downshift in technical terms. They simplify the capability as follows: “With NBase-T Downshift, the best available data rate is selected for the connected link. Downshift works for 10 Gbits/sec and other rates in addition to 2.5 and 5 Gbits/sec. Downshift enables a link that fails to automatically (no manual reconfiguration required via a management interface) renegotiate to a lower link speed (using the IEEE 802.3bz standard autonegotiation mechanism). NBase-T Downshift enhances the user experience by smoothly reducing link rates, avoiding persistent Link Down.”

The value of the Downshift capability is apparent; it automatically reduces the link rate—say from 5 to 2.5 Gbits/sec—without the need for manual intervention. Given that 802.3bz/NBase-T operation will take place over links of Category 5e and 6 cabling that were not intended for those speeds when installed, and the practical reality that many users will expect plug-and-play rather than following the evaluation and mitigation steps described previously, NBase-T Downshift is likely to enable hassle-free multi-gigabit transmission via 802.3bz/NBase-T.

In an “at-a-glance” document, the NBase-T Alliance assures, “In the vast majority of cases, NBase-T and IEEE 802.3bz provide 2.5- and 5-Gbit/sec speeds on Cat 5e and Cat 6 cabling. With more uncertainty, 10GBase-T may also run on installed cabling. Downshift removes any uncertainty about the cabling, and enables links to adjust to the highest supportable speed. When installations have severe noise, or cabling impairments that limit the bandwidth, NBase-T Downshift takes over to adjust the data rate and maintain links. Downshift takes over when it detects difficulty establishing or maintaining link, and selects the next best speed, even if the environment changes over time.” 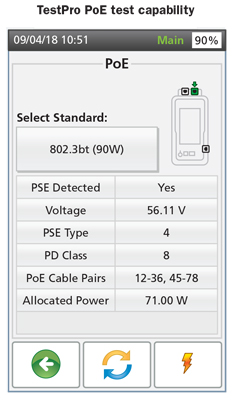 AEM’s TestPro validates the power sourcing equipment (PSE) and powered device (PD) in addition to the electrical-performance characteristics of an installed cabling channel.

A new generation of products has been born out of 802.3bz/NBase-T technological development. A page on the NBase-T Alliance’s website lists compatible products, which include PHYs, switches, controllers, access points, magnetics/connectors, and network interface cards. Fluke Networks’ DSX CableAnalyzer series is listed as well.

It’s noteworthy that the most-cited application for 2.5/5-Gbit transmission, 802.11 Wave 2, also is very likely to employ Power over Ethernet. Fluke Networks has spoken, written and presented for several years about the significance of the electrical performance characteristic resistance unbalance in relation to a cabling system’s ability to support PoE. Recently in a blog post, Fluke Networks’ Mark Mullins reminds us, “In Type 1 and Type 2 PoE using Alternative A [in which power is delivered simultaneously with data over pairs 1-2 and 3-6], power is transmitted by applying a common-mode voltage on the two pairs, meaning the current is evenly split between the two conductors. For this to happen, the DC resistance of each conductor in the pair must be balanced (equal), and any difference is referred to as DC resistance unbalance. Too much unbalance can distort data signals, causing bit errors, retransmits and even nonfunctioning data links.” 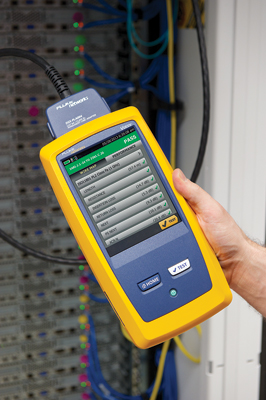 Also in the testing realm, AEM recently introduced their modular test platform TestPro. Lisa Schwartz, director of product marketing and channels with AEM, observed that with TestPro, “One module has the ability to perform multi-gigabit link qualification that provides a pass/fail for 1-, 2.5-, 5-, and 10-Gigabit Ethernet. TestPro will provide information with regard to SNR, headroom, and a per-pair result across each link speed.”

TestPro also performs Power over Ethernet evaluation. “A single autotest confirms link speed, PoE, and the quality of the physical infrastructure,” she added.

Chris DiMinico, a consultant for AEM, pointed out that TestPro’s PoE assessment “validates the PD [powered device] and PSE [power sourcing equipment] as well.” The tester was developed with the realities of PoE deployments in mind, DiMinico noted. Specifically, he explained, a failure in a PoE-powered channel serving a wireless access point can raise a number of “what ifs.” Is the full cabling channel, including patch cords, capable of supporting both the data and power required at the end device? Does the problem exist in the PSE? In the device being powered? TestPro’s ability to validate each component from end-to-end prevents a network administrator from having to separately troubleshoot the cabling, PSE, and PD.

AEM emphasizes that TestPro is a tool that can be used on the installed base of cabling as well as for new installations. Its ability to qualify the installed base for 10-Gbit Ethernet, in addition to the 2.5/5G and PoE test capabilities discussed here, enable users to evaluate installed cabling’s preparedness for coming applications. TestPro also can function as a certification tool, conducting the full suite of standard-defined tests on systems to ensure performance meets the specifications of standards such as Category 6 and 6A. It operates at up to 3 GHz, 1.5 times the 2-GHz range of Category 8 systems.

Schwartz concluded that TestPro is an appropriate tool for “anyone tasked with validating link speed—contractors, IT administrators, network engineers. With IoT-enabled devices proliferating, users can be challenged with the finger-pointing issue. When something doesn’t work, what is at fault? TestPro’s modularity gives it the ability to be taken in a number of different directions by its user, and to serve many user needs.”

The simultaneous need for multi-gigabit speeds and Power over Ethernet puts twisted-pair cabling system performance under a proverbial microscope. The evolution of evaluation and mitigation practices, as well as the technological development of capabilities being built into field test equipment, is providing that microscope through which cabling systems can be viewed.u

Radiall America, Inc. announced that it has completed its acquisition of Timbercon, Inc., a fiber-optic interconnect specialist based in Tualatin, Oregon.
Jan 27th, 2020