Passive couplers are not so passive

Think of them as the off-ramps and on-ramps of a major highway. Just as commuters get to their destination via the highways and byways of the world, a lone beam of light can reach multiple points through a single fiber-optic cable with the help of a passive coupler. 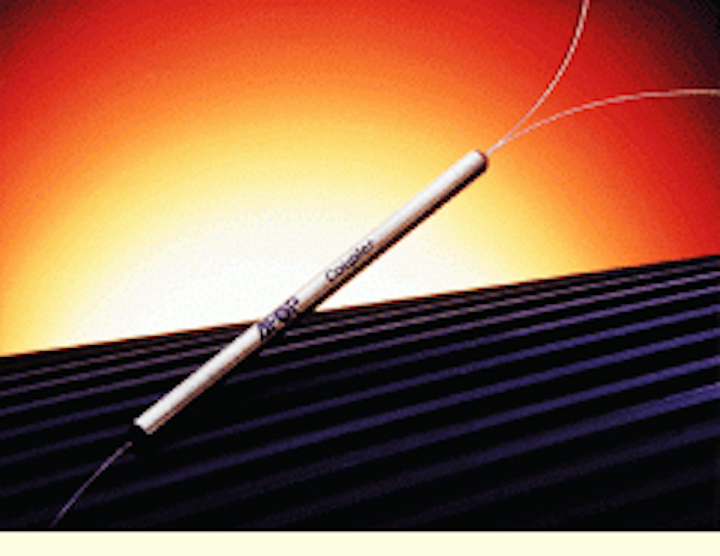 Think of them as the off-ramps and on-ramps of a major highway. Just as commuters get to their destination via the highways and byways of the world, a lone beam of light can reach multiple points through a single fiber-optic cable with the help of a passive coupler.

In a nutshell, this is what a passive coupler does. For example, if you have a single fiber-optic line that sends signals from point A to point B, and you want to transmit to point C, you can either run another fiber-optic line or buy a second transmitter, which can be a big expense. On the other hand, you can buy a coupler, which splits the signal and feeds it to point C. "The main function of a coupler, or splitter as it is often called, is to divide the intensity of the light. It takes multiple wavelengths off a common fiber and separates them," says Moec Adatia, sales manager for the fiber-optic division of Gould Electronics Inc.

If you keep that in mind, it seems almost inappropriate to refer to passive couplers as idle or inactive. In fact, they`re far from it. Passive couplers have bolstered business for cable-TV service providers because it gives them the ability to reach the masses efficiently, no matter where they are. Furthermore, the devices play a vital role in local-area and wide-area networks (lans/wans), telecommunications systems, and test instrumentation.

Fused-fiber and planar technologies are used to make couplers. Fused fiber consists of the same type of material that comprises the rest of the cabling in a network, while planar devices are constructed on glass substrates. There are many types of couplers (see Product Update table, page 88).

A T-coupler is a 3-port device that can be used in lans, wans, and telecommunications systems. In a typical bus network, a coupler at each terminal splits off the power from the bus and carries it to a transceiver in the linked equipment. Losses increase, however, with the number of terminals that are added to a network using T-couplers. Thus, they are only useful when a small number of terminals are involved.

The star coupler, on the other hand, makes up for the T-coupler`s shortcomings. Star couplers are used when all signals pass through a central point where the coupler is located. They typically have an equal number of input and output ports. A signal to any of the ports on one side is distributed equally to all ports on the other. Star couplers can also have an unequal number of input and output ports, and many can operate in either direction. Usually, one set of ports is designated and labeled as input and the other as output. Star couplers are available in 16 x 16, 8 x 8, or even smaller--4 x 4--and are used, for example, to interconnect all stations in an Ethernet network.

Finally, there`s the tree coupler, a staple for the cable-TV service provider. The role of a tree coupler in the greater scheme of a network is depicted on Gould`s Web site, fiberoptic.com/gould. The image shows an operations center, a remote terminal, the network, and homes of cable-TV subscribers. In the middle of it all is a coupler that funnels multiple signals to TV viewers.

The question of which coupler to choose depends on the application or the network and its structure. "Essentially, the market is very application-driven," says David Hubbard, director of sales and marketing for Alliance Fiber Optic Products Inc. (AFOP).

Manufacturers such as afop have focused on providing passive couplers that can be used in numerous applications. Two couplers that are manufactured by afop--the Series 811 Wideband and Series 811 Dual Window--can be used with Synchronous Optical Networks; point-to-point lines; and cable-TV and telecommunications systems, wans, lans, and test instrumentation.

Hubbard explains that both couplers fall under the T category and are wideband devices. There is, however, one difference between the two: Wideband couplers offer performance over an extended wavelength range of plus or minus40 nanometers at either 1310 or 1550 nm. They are also available with plus or minus50-nm passband. afop`s dual-window couplers are available in both 1 x 2 and 2 x 2 configurations and perform over an extended wavelength range of plus or minus40 nm at both 1310 and 1550 nm. "That`s the only thing that separates them," Hubbard adds. "The dual window can operate in two wavelength regions. You`ll be able to operate at either wavelength--1310 or 1550 nm. It allows for future upgrades, too. It`s there when you need it."

afop also manufactures tap couplers, a specialized form of the T-coupler, which can be used for monitoring, control, and optical amplification. Instead of the 50:50 ratio of signal distribution that most couplers provide in distribution of cable-TV signals, the tap coupler provides a 99:1 ratio. "That means you are feeding back what information is being transmitted by the fiber. It can monitor the output signal, and you can stabilize the fiber-optic line with the feedback that it provides," Hubbard says.

Gould likewise has carved a niche for itself in the coupler market, according to Jane Arason, who works in the company`s marketing-communications division. Wavelength-independent couplers (wics), she says, can be used to split light from one fiber to two, or combine light from two fibers to one and provide high performance across a broad bandwidth of 1270 to 1600 nm.

wics are ideal for use in two-color optical time-domain reflectometer applications, full-duplex transmission on a single fiber, multicolor sensors, and trunk/loop branching. Wavelength-flattened couplers manufactured by Gould, she adds, are suitable for use in instrumentation, multicolor sensors, trunk/loop branching, cable-TV distribution, and laser feedback. The devices are available in 1310- and 1550-nm or custom wavelengths.

What separates Gould`s couplers from the competition, Arason says, is how they are manufactured: "Some companies splice fibers together by angling the fibers. We used the fused-biconical taper process. It consists of placing two or more fibers adjacent to each other and then fusing and stretching them to create a central coupling region."

But no matter how couplers are manufactured or what features they offer, finding the right one out of the many that are manufactured depends on the application. And there are other considerations. "The performance and reliability of couplers have improved," says Gould`s Adatia. Also, "Because [sales] volume has gone up, the price has come down."