With associated local area networks (lans) growing at a dizzying pace, massive numbers of low-fire- performance communications cables are finding their way into concealed overhead and underfloor spaces of open-plan offices and posing a threat to firestopping systems worldwide. With the growth of networking has come heightened awareness among cabling contractors, designers, and installers that their firestopping efforts may be better served by installing high-fire-performance cables in plenum spa 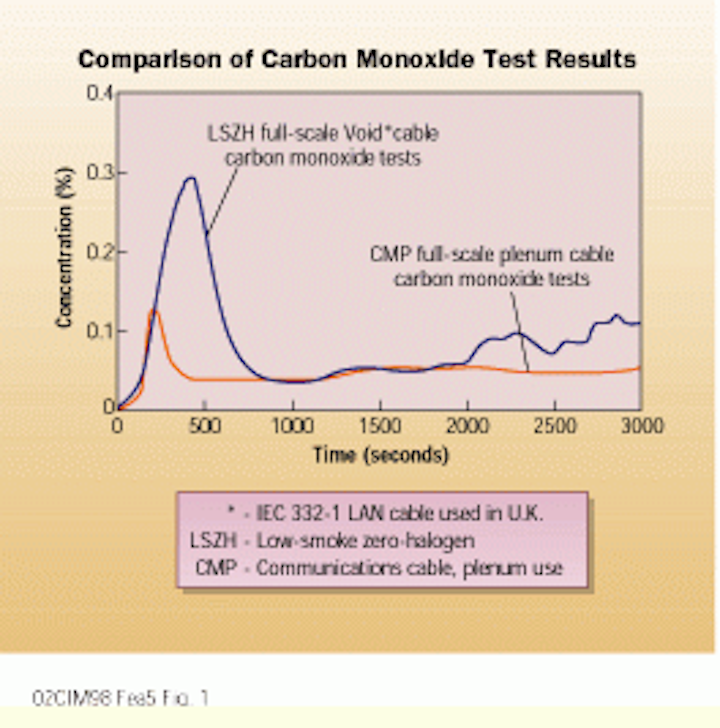 Testing shows that cmp cables may be a better alternative to cmx and lszh cables in plenums.

With associated local area networks (lans) growing at a dizzying pace, massive numbers of low-fire- performance communications cables are finding their way into concealed overhead and underfloor spaces of open-plan offices and posing a threat to firestopping systems worldwide. With the growth of networking has come heightened awareness among cabling contractors, designers, and installers that their firestopping efforts may be better served by installing high-fire-performance cables in plenum spaces otherwise intended only for noncombustible or limited- combustible construction materials.

Since plenum spaces are concealed, they can become unsafe havens for fire and smoke if combustibles are present. Numerous large, devastating fires have occurred in multistory buildings with combustibles in concealed areas.

Historically, products used in plenum areas had to be fire-partitioned and very low in fuel load and combustibility, or protected by either fire-resistant coverings or fire-extinguishing systems. These standards may have worked well in the past, but new fire-path and fuel-load problems are emerging--the number of personal computers on lans is growing at about 25% a year, and lan cabling systems are being replaced every two to three years.

Many spaces above ceilings and below floors once devoid of cabling are now filled with all types of communications cables, including low-fire-performance cables. Among them are cables known as low-smoke zero-halogen (lszh) in North America and as nonhalogen in Europe and Asia, as well as cmx (communications cable, dwellings), used in the United States, which must be installed in protective metallic conduit in plenums, and cmx/t (cmx installed in capped metal trunking), which is sometimes used in the United Kingdom.

The United Kingdom`s Building Research Establishment/ Fire Research Station (bre/frs) conducted more than 50 fire tests on commercially obtained 4-pair unshielded twisted-pair (utp) communications cables, a type commonly installed in concealed horizontal spaces to connect PCs to lans. The 200 lengths of cable used in each test--each cable 7 meters long--represented about one generation of cable in a typical one-floor open-plan office layout, according to at&t site surveys. (More than one generation of installed cable is often present in many buildings.) Fire scenarios, ventilation conditions, and lan cable designs and configurations were varied. The comprehensive testing produced some dramatic and unexpected results about the firestopping ability of lszh and cmx versus cmp.

The test rig was a 7.4 x 5.7 x 4-meter-high concrete-block, burn-room/ceiling-void, re-burnable structure with a 2-hour fire-rated suspended ceiling forming a concealed above-ceiling open-plan space 1 meter deep. Cables were supported on a steel ladder 7.2 meters long and 0.38 meters wide, and the ladder was located midway between the suspended ceiling and the structural ceiling of the test rig.

To simulate an office-workstation conflagration, a 1-megawatt source fire was created with a 150-kilogram crib of kiln-dried pine. The air extraction system was capable of 4.5 cubic meters/second. Heat and smoke from the crib fire entered the plenum through a breach hole in the suspended ceiling directly over the crib and were extracted through vents at the far end of the plenum. Linear flow rates could be controlled at intervals of up to 10 meters/sec.

During the testing, lszh and cmx cables ignited readily, released comparatively large amounts of heat, and burned the full length of the plenum. A large fireball developed on the horizontal cable ladder and a large pool of fire formed on the suspended ceiling beneath the cable ladder in the plenum space. lszh smoke density was higher than that of cmx/t and cmp but noticeably lower than cmx.

Along with preventing the spread of flame and heat generated by a fire, firestopping must restrict smoke and toxic combustion. The testing showed that lszh cables produced more smoke and carbon monoxide than expected, while cmp cables showed no signs of flame spread and generated very little smoke. When the smoke cleared, tests conclusively showed cmp cable to be superior to lszh and cmx cables in overall firestopping performance.

Source of the fire was a 150-kilogram crib of kiln-dried pine.

Inside the full-scale test rig, lszh cable (left sequence of photos) readily ignited and spread along the ladder, creating a large pool of fire on the suspended ceiling beneath the cable ladder in the burn-room`s plenum space. Conversely, when cmp cable (right sequence) was fire-tested under similar circumstances, flames did not spread along the ladder.