Probing the challenges of cable-tracing tools 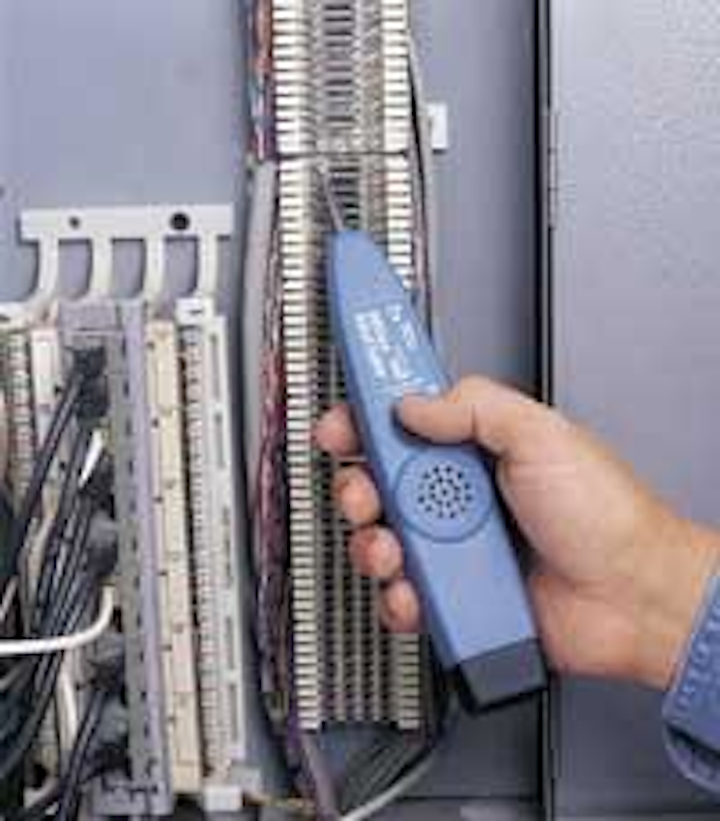 The cabling industry’s general trend toward higher density of terminations has been lauded on many fronts, particularly as a means of allowing more networking ports per unit of rack space than ever before. Whether it is a conventional commercial-building cabling setup with a single backbone riser and intermediate crossconnects on each floor, or a data-center environment that is infamous for the density of its patching fields, chances are that any telecom space is more tightly packed with connections now than it was a few years ago.

While that congestion of cables has great benefits in the way of saving real estate, it has also created challenges for technicians handling the cables, while terminating, carrying out regular system maintenance, and troubleshooting. Take a look through the catalog of any connecting-hardware manufacturer and, along with patch panels, you are sure to find cable-management rings, troughs, and other accessories intended specifically for termination spaces. Such products are popular and necessary because of the sheer number of cables present in a rack-based termination environment.

Another product line affected by the growing prominence of high-density termination spaces is the tone generator/probe combination (See table of products, page 40). “Locating cable in a bundle due to signal bleed from cable to cable, differentiating the tone from noise or a false signal, finding a signal due to active network connections-these things are problematic if not impossible” for much of today’s tone-and-probe equipment, says Dan Klimke, marketing manager for Fluke Networks’ Network Tools product line.

Put simply, the toner and probe are used in tandem to trace a single copper-based (twisted-pair or coaxial) cable among a bundle or cluster of cables. The tone generator does just what its name indicates, sending tone down the circuit that the technician is trying to identify. The technician then uses the probe, often a wandlike device, to detect the signal injected by the generator-and by doing so, finding the target cable.

The tone generator and probe combination is perhaps the most fundamental testing tool and is sure to be present in every technician’s toolkit, with a street price most often well below $200. Yet that does not mean the tools are commodities, or that they have fully matured in their technological development. To the contrary, users of this equipment need it to be more advanced and capable than ever, in part because of the heavily congested termination fields noted earlier. Click here to view Toners & Probes Product Update.

To combat the difficulties in today’s cable-tracing environment, several manufacturers have designed technologies into the probes that allow them to better ferret out the generated tone. Ideal Industries, for example, recently introduced its Tone Generator and Amplifier Probe set. The Amplifier Probe “has exceptional signal-acquisition sensitivity to assure pinpoint identification even in the most congested cable bundles,” the company says. The Amplifier Probe’s volume control is adjustable to suit a broad range of working environments. It also features a replaceable tip that can be changed without opening the case. The Amplifier Probe is designed to work with any tone generator on twisted-pair, coaxial, and de-energized AC wiring.

The tone generator half of this product set also includes enhancements over previous generator devices. It provides four functions: tone generation, continuity testing, talk battery, and line-polarity confirmation. It features a separate Talk Battery mode, automatic shutoff after three hours, and the ability for the user to select from among three tones by using the tone generator’s front panel. The built-in regulated signal amplitude generates an unbalanced tone signal that travels farther on Category 5 or better cables than previous models could travel. The toner provides constant tone amplitude over the life of the battery as well as two-tone amplitude: normal and half.

The latest toner/probe offering from Fluke Networks similarly includes enhancements to both the signal-detecting probe and the signal-generating toner. For the IntelliTone Toner and Probe, digital signaling is the key to clear cable tracing. Fluke Networks’ Klimke says that digital-signal processing and detection cut through the problems caused by congested cable bundles, because the process does not suffer the limitations of analog-based signal tracing.

“The digital signaling employed by the IntelliTone series defeats bleed to quickly isolate a cable in a bundle, rejects noise and false signals to locate a cable despite network termination or environmental conditions, and safely tones on active networks,” explains Klimke. “The resulting advance in cable-location technology significantly reduces cable locating and troubleshooting time,” as well as providing other diagnostic features, Klimke adds.

In addition to the toner using digital signaling, the probe uses both audio and visual (light-emitting diode) indicators to simplify signal interpretation. Users attach the toner to a cable, set the sensing mode on the probe, and the audio indicators and LED display identify the location of the cable being sought clearly and immediately, eliminating guesswork required with analog toner/probe sets, its manufacturer says.

The IntelliTone product set is available in 100 and 200 series; both provide telecom line diagnostics and talk battery, while the 200 also includes a cablemap function, telecom service ID as well as diagnostics, and an Ethernet link-detect function.

While the makers of toner/probe sets must compete with the established trend of highly congested termination spaces, some of them are also in the midst of another recent trend in the cabling industry: business consolidation.

The test-equipment sector has not been immune to the recent spate of mergers and acquisitions and, in fact, some companies have been trend-setters. It has been more than four years since Textron, parent company of toner/probe manufacturer Tempo, acquired the company then known as Progressive Electronics. Progressive had been well-known for its technician-tool product sets, including toners, probes, and others. Those product lines were brought under the Tempo umbrella, and if you look today at the product portfolio on Tempo’s Web site, you can see a complete line of toners and probes-providing both a glimpse of the breadth of product offerings available from the company as well as the many different capabilities that users seek in toner/probe sets.

In May 2004, Fluke Networks purchased the tools and test-set business of Harris Corp. Beginning this autumn, all Harris products will roll over to carry the Fluke Networks brand. According to Fluke Networks, this transition will include everything surrounding the products, including look-and-feel, product packaging, marketing materials, and end-user facing experiences.

One thing most assuredly will not change, for users of any make and model of toner and probe: the importance of being able to trace that single desirable signal in maintenance and troubleshooting situations.