I figure if I'm going to blatantly steal a quote as the title for my editorial, I might as well steal from Yogi Berra, who perhaps has offered the most quotable misquotes of all time. 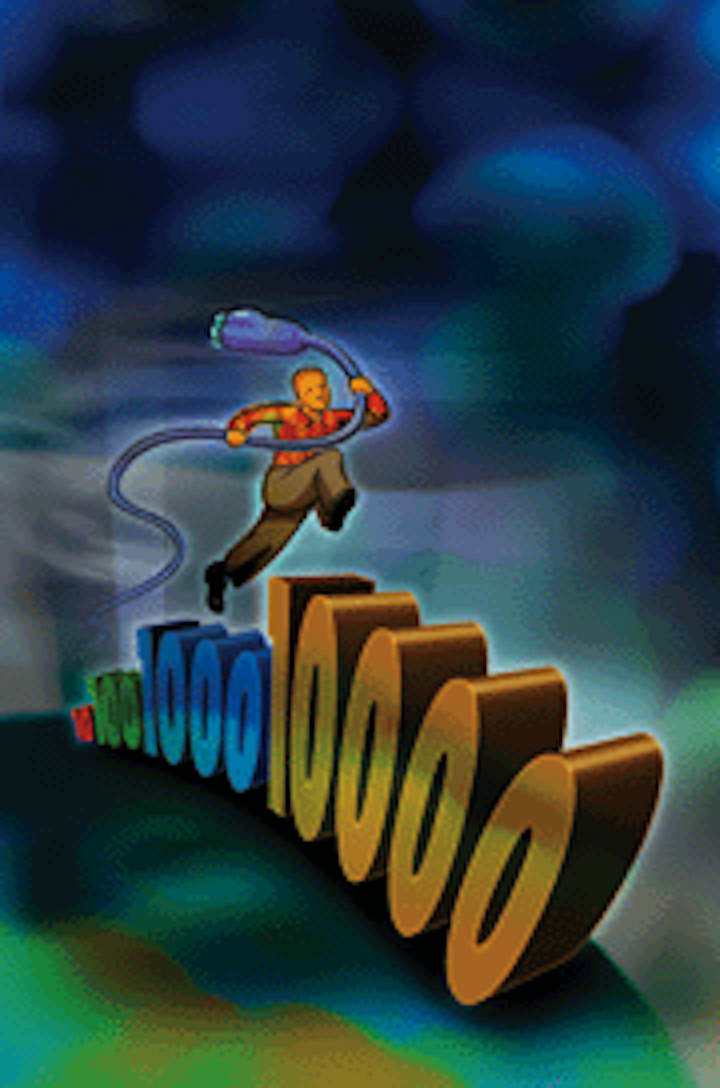 I figure if I'm going to blatantly steal a quote as the title for my editorial, I might as well steal from Yogi Berra, who perhaps has offered the most quotable misquotes of all time.

The two illustrations on this page brought to mind the Yogi-ism that serves as the headline this month. Each depicts a man leaping from one number to another, symbolic of a network's tenfold increase in data-transmission speed. The illustration on the left probably looks familiar, because it is from the front cover of this issue. In it, the man is leaping from "1,000" to "10,000" and is carrying a terminated unshielded twisted-pair (UTP) cable.

The illustration on the right might not look familiar. But for some of you, it might. It's an image we used in a supplement to this magazine back in February 1999. Six years ago, the leap from 100 Mbits/sec to 1 Gbit/sec was the talk of the industry.

In 1999, users who recently had installed Category 5 cabling wanted to know if they would have to replace that infrastructure to support Gigabit Ethernet (GbE). Cabling Installation & Maintenance recruited three industry experts to answer this and other questions of the day. Each expert provided detailed and well-thought-out responses, but for the sake of brevity as well as poetic license, I will recall just the initial response of each. Expert #1: "No." Expert #2: "No." Expert #3: "It is not likely."

History has since shown us that many Category 5 installations ultimately conformed to Category 5e specifications and, therefore, could support gigabit-speed traffic.

In 2005, when users who recently installed Category 6 cabling systems ask if they will have to replace them to support 10-Gigabit Ethernet, the responses are much more likely to lean toward the affirmative. Unlike the Category 5-Category 5e relationship, in which both perform to the same 100-MHz bandwidth, Category 6 and Augmented Category 6 will be tested to different frequencies. Category 6 systems have usable bandwidth at 200 MHz and, per TIA specifications, are tested to 250 MHz. Augmented Category 6, in line with the IEEE specs for 10GBase-T, will have to yield usable bandwidth at 500 MHz.

Will many of the Category 6 systems in place today perform in a 100-meter channel at two-and-a-half times the bandwidth at which they were originally engineered? If I asked three experts, I bet they would say, "No," "No," and, "It is not likely."

That's one major difference between the jump to GbE six years ago and the eventual leap to 10-GbE. One similarity is that now, just as then, performance characteristics that previously were inconsequential will come to the forefront. In 1999, power-sum near-end crosstalk and power-sum equal-level far-end crosstalk were the new parameters that sent engineers at cable manufacturers as well as test-equipment companies scurrying to their laboratories. Today, the specter of alien crosstalk haunts many of those same individuals.

Finally, I would be remiss if I didn't point out that the optical-fiber version of Gigabit Ethernet was standardized and networking products were shipping well before the copper version was a reality-just like the case has been, and continues to be, for 10 Gig. And over six years' time, the variables affecting a choice between copper and fiber as an infrastructure have changed very little: availability and need, overall network system cost, and transmission distance.

If you have been around the cabling industry since the mid- to late-1990s, then perhaps you didn't learn much by reading this page. That's because you have experienced firsthand another one of Yogi's quotes: You can observe a lot just by watching.