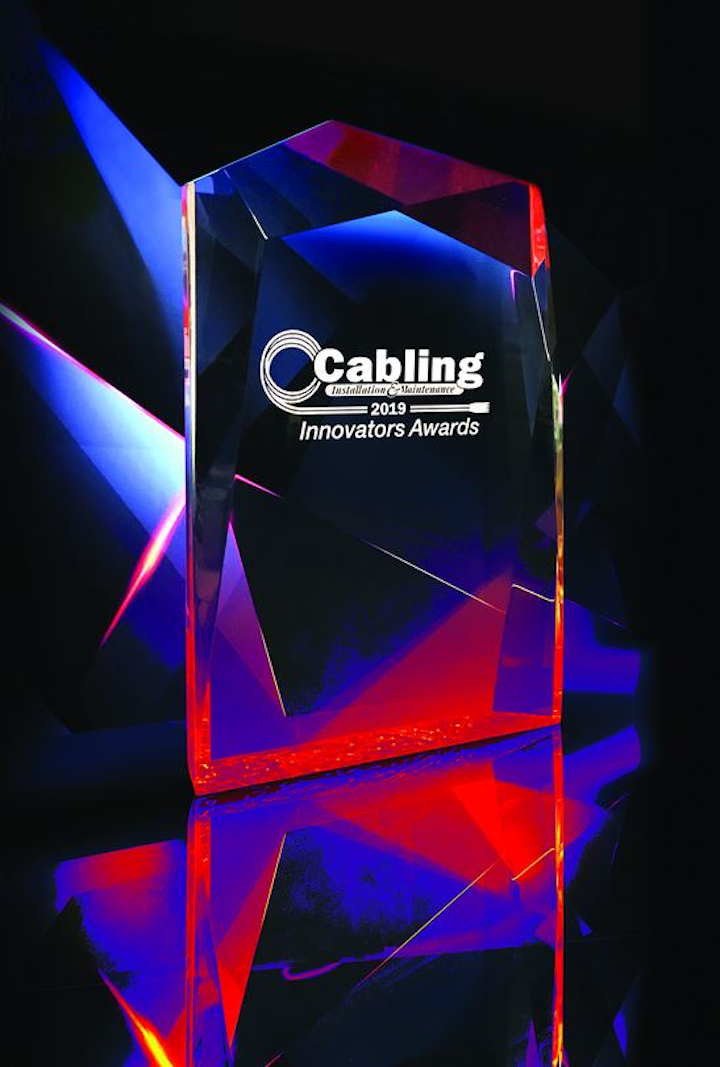 If you look through the entire list of the 2019 Cabling Innovators Awards honorees—and it is an extensive list—it’s difficult to overlook the prominence of remote-powering technologies, products and systems among them. Looking only at those receiving Platinum awards, 5 of the 9 recipients relate to remote powering in one way or another.

Digital Electricity Cables from Belden are an option to safely and reliably transmit power and data, at wattage levels and distances beyond those of standards-based Power over Ethernet.

CommScope’s IEC 63171-1 Copper LC-Style Connector concept will be a significant enabler of the Internet of Things. Single-Pair Ethernet transmission will incorporate Power over Data Line (PoDL) technology to provide both power and data transmission to sensor-based network devices.

Fluke Networks’ MicroScanner PoE Cable Verifier speeds the installation and troubleshooting of Power over Ethernet devices, including those supporting 802.3bt.

Panduit’s Power over Ethernet Extenders bring resolution to vexing challenges associated with PoE, including the estimate that as many as 10 million IP cameras need reach beyond 100 meters.

Products and technologies related to remote powering can be found elsewhere among award recipients as well. For example, Superior Essex’s Category 6+ Low Smoke Halogen Free (LSHF) cable was central to the Living Building Challenge project at architectural firm Arch Nexus’s Sacramento, CA office. Chosen for the Arch Nexus project because of its environmental and health product declarations (EPDs and HPDs), the Category 6+ LSHF cable is designed for Power over Ethernet applications requiring LSHF construction that meets IEC 62821 requirements for toxicity, acidity and smoke.

The building generates more power than it expends, thanks in part to the LSHF Category 6+ cable, which connects and powers 40 client computer workstations, three private offices, and two conference rooms in addition to security systems, and handles data for the entire complex.

Another example is the Cordisa NAP data center project in Tibas, Costa Rica, which featured Panduit solutions and services. In addition to cabling infrastructure from Panduit, the Cordisa facility includes an intelligent building system provided by Igor Inc. The system delivers lighting, control, and automation, all powered by Power over Ethernet. Control nodes connect to PoE switches and control the luminaires. Motion sensors turn lighting on and off in the facility—a key contributor to energy efficiency.

Other systems receiving Cabling Innovators Awards that are PoE-related are CommScope’s imVision building network management system, which has been updated to include PoE management and the incorporation of physical security network functions. And Mono Systems’ Dual Rail Cable Tray is designed to provide separation of PoE cabling from standard structured cabling.

The growing deployment of remote-powering systems, including standards-based Power over Ethernet, has both enabled more-efficient deployment of many network devices and revealed some of the inherent challenges of installing and verifying these systems. Several of this year’s honorees are recognized for the ingenuity and creativity they brought to their solutions for these challenges.

Particularly among Platinum Innovators honorees, remote powering technologies including those related to Power over Ethernet are prominent.
Sep 30th, 2019

For the 2019 Cabling Innovators Awards, ten entrants in this category received recognition, including one Platinum, four Gold, and five Silver honorees.
Sep 30th, 2019

For the 2019 Cabling Innovators Awards, two entrants in this category received recognition, including one Platinum and one Silver honoree.
Sep 30th, 2019

For the 2019 Cabling Innovators Awards, twelve entrants in this category received recognition, including one Platinum, five Gold and five Silver honorees.
Sep 30th, 2019

For the 2019 Cabling Innovators Awards, two entrants in this category received recognition, including one Platinum, and one Silver honoree.
Sep 30th, 2019

For the 2019 Cabling Innovators Awards, four entrants in this category received recognition, including one Platinum and three Gold honorees.
Sep 30th, 2019

For the 2019 Cabling Innovators Awards, three entrants in this category received recognition, including one Platinum, one Gold, and one Silver honoree
Sep 30th, 2019