Despite lessons of Sept. 11, many data back-up plans have fallen by the wayside due to budget cuts. 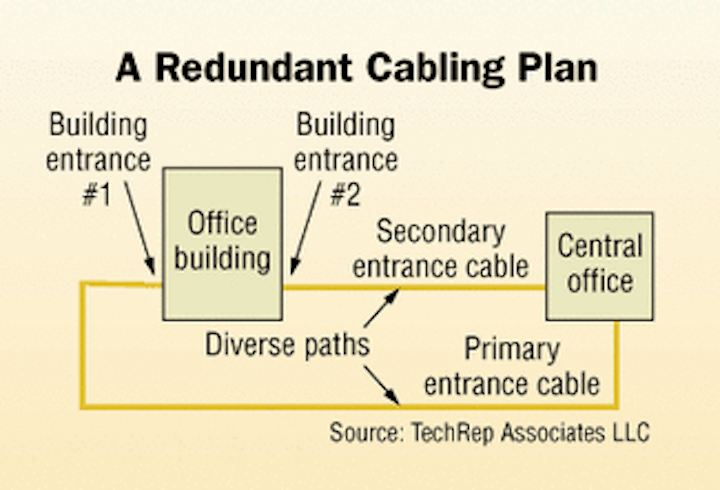 Make the investment in a disaster preparedness and recovery system. Maintain it, and consider using the highest category of copper cable possible in the horizontal network.

That is the advice of experts who are looking at the state of end user's disaster preparedness and recovery plans. They say that despite the difficult lessons of the terrorist attacks of Sept. 11, 2001, many companies have let their recovery plans fall by the wayside.

End users who have plans in place are letting them grow obsolete, even as new applications and higher bandwidth cables come onto the market. Worse, some users are still failing to plan for disaster recovery, and learning the conswequences too late.

Some industry leaders say a major reason has been the sluggish economy, which has forced companies to put cable network upgrading plans on hold.

"I think end users are aware of the risks, but I don't think that they are paying attention to it sufficiently, or at a high enough level," says Beni Blell, fiber-optic product business manager for Berk-Tek, (www.berktek.com) based New Holland, PA.

As the economy edges toward a possible rebound, however, industry leaders say end users will need to redefine the scope of their infrastructure, figure out what works best for them when it comes to disaster preparedness and recovery, and then maintain those systems.

Disaster preparation steps include the planning and implementation of a communications system that prevents long-term outages. Some of these steps involve a minimal amount of investment, including security measures—keeping doors to equipment areas locked, limiting the number of people who have access to telecom rooms, and checking uninterruptible power supplies.

Other more costly steps include data storage and backup procedures that follow stringent rules. A small portion of the market—about 5%—take the more expensive route of having their data copied onto discs and tapes, and shipped to offsite data storage centers.

Most end users are advised to install a voice/data backbone distribution system that would minimize the potential for disaster. Such systems feature a redundant cabling plan, where installers pull cable through multiple entrances to a building. This provides an alternate routing between buildings should a primary path be broken or disrupted. The approach should include a network of copper and fiber cables, providing the end user with double protection.

"They (cables) can terminate at the same point, but have alternate routes and not follow the same path," says Johnny Parham, president of TechRep Associates LLC (www.techrepllc.com), based in New York City. The company is a distributor of communications equipment, including circuit protection systems. "It's critical because if one path gets interrupted, you don't lose access to the central office."

Through the dual penetration plan, cables are directed to the street, then to different central offices. The end user should ideally run half data and voice off each path so that if one cable were cut, the end user would still have half of the traffic.

"Your fiber or copper come in one side of the building, and go to the distribution frame on the other end, and out through an entirely diverse route," says Benjamin Tartaglia, executive director for the International Disaster Recovery Association (www.idra.com), based in Shrewsbury, MA.

It is equally important to protect the backbone from the possibility of damage. To do this, installers should ensure that no two inter-building cables are routed in the same conduit. Separate routes should also be used for conduits between buildings.

"'Diverse' means the cables should never be in the same conduit—never together," says Tartaglia. "This means if one is cut completely in half, you can still function on the other one."

Some manufacturers today are trying to encourage end users to adopt Category 6 cabling into their horizontal networks as part of a disaster preparedness and recovery plan. Companies like Leviton Voice & Data (www.voicedata.com), based in Bothell WA, argue that Category 6 offers better security potential, as it can handle higher end security software protocols.

Manufacturers are likewise coming out with cables that could be ideally suited for security and redundant cabling plans. Berk-Tek, for example, has developed the Adventum cable product line designed for campus environments, and works as a disaster preparedness solution by running as continuous cables through indoor and outdoor environments without having to be funneled through a transition point.

Aware, but slow on the take

But while end users are aware of these things, analysts say they are slow to take necessary steps to update their systems. Parham says most end users today are, in fact, more than aware of the need for disaster recovery/preparedness steps-mostly because of the Sept. 11 terrorist attacks, after which companies were inclined to take a strong interest in disaster preparedness.

But with a sluggish economy, the enthusiasm has not lasted.

"There was a lot of implementing of disaster recovery plans that happened after Sept. 11, but it has cooled off," says Parham. "Companies are cutting costs."

Walt Magnussen, director of telecommunications for Texas A&M University (www.tamu.edu), agrees: "I think there is now more planning emphasis and more man hours spent on disaster recovery, and more dollars being spent on it than ever before. But could it be more if the economy were in better shape? It definitely could be."

Magnussen says Texas A&M learned the hard way to invest in a disaster preparedness and recovery system. The campus is split into east and west sectors. Nine years ago, during an excavation project, a plow cut eight feet down into the earth, slicing cables and knocking out voice/data connections between the two halves of the campus. Texas A&M didn't have disaster preparations in place at the time, but they do now.

The incident led to a full re-design of the campus network infrastructure. Today, cable access runs from the university's main wiring closet to the Intermediate Distribution Frame, heading to the campus backbone and to the WAN.

All of the campus data networks have surge protectors and an automatic mechanism that deals with fault tolerance. A network of redundant cables has been pulled through multiple paths throughout the campus.

"At the infrastructure level, we have put in enough fiber to make it totally redundant so there is no single cable path, and nothing can knock out our entire network," says Magnussen. "No two cables run through the same conduit on the main backbone."

And the A&M disaster preparedness project isn't finished yet. The university is laying cable to provide a fiber route to a completely separate central office located off campus. "This is so that even if the central office were to be devastated, all our data circuits and voice would be routed over a Sonet network to another carrier, and it would leave us with less than a one-day outage," says Magnussen.

But too many end users, industry leaders say, are going the route that Texas A&M University took—instituting disaster recovery after a disaster.

Patrick McCurdy, product marketing manager for Phoenix Contact(www.phoenixcon.com), based in Harrisburg, PA, says that while end users may see disaster preparedness plans as an insurance policy, it hasn't necessarily translated into action since Sept. 11.

Phoenix Contact manufactures lightning arrestor and transient voltage surge suppression solutions, including the Combotrab. Says McCurdy, "There is good awareness, but not as much is being done as it should. This is, to some degree, an insurance policy. You don't need it till you have a problem."

Worth paying the price now

And change won't come easily. Analysts say end users, still stymied by the slow economy of the past two years, have yet to make investments in the products and plans that would give them optimal protection in the event of a disaster.

"There isn't a lot of investment in these systems," says Brian Ensign, senior project scientist for Leviton Voice & Data. Whoever makes the decisions, from purchasing protocol to active equipment, has a budget to look at, Ensign adds. And security/disaster recovery is often the place that gets cut. "You need active components, and ones of good value for this," Ensign continues.

But analysts say end users can take several simple, cheaper procedural steps that go a long ways toward disaster prevention. End users can, for example, invest in firestopping products and fire-retardant, plenum-rated cables that will prevent fires from spreading and damaging networks. They can also do all they can to keep telecom rooms or closets clean and free of the "rats nest" syndrome.

"If something goes wrong, and you have to act quickly and you can't find out where your cables are because you're trying to sort through that mess, it's going to slow up getting your network back on line," says Parham.

But in the end, industry leaders say, the more costly investments are going to have to be made. End users need to put the total cost of disaster recovery in perspective—investment now can be a lot cheaper than facing a disaster unprepared.

"There are many dead back-up power units out there," says Johnny Parham, president of TechRep Associates LLC. "People see the red light, but it gets overlooked or not noticed."

Chuck Crawford, computer services manager for Belden Electronics Division (www.belden.com), based in St. Louis, MO, says that a disaster recovery plan should be updated once a year. Maintenance may include going over a contract with the disaster recovery facility representing the end user. End users who have installed a voice/data backbone distribution system that would minimize the potential for disaster. should likewise conduct an annual disaster recovery drill.

Crawford says companies that partner with back-up data disaster centers need to be on the lookout during this testing phase for changes that may have to be made to the system—including updating software and revising a disaster recovery plan with the partner, for example.