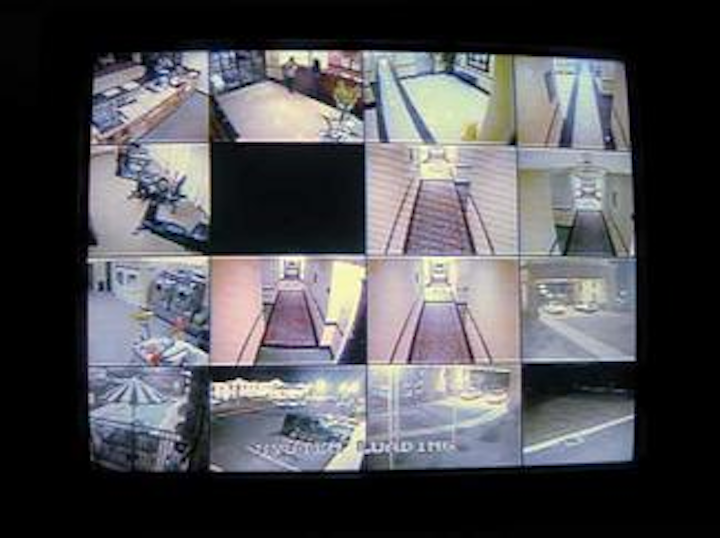 As surveillance-style video technology has migrated from analog to Internet Protocol (IP) or digital format, the application has become generally recognized as a network device. With that growing recognition has come a recurring question for network managers: How much of my bandwidth will IP video consume?

By any measure, the answer is at least some.

One reason surveillance is getting so much attention in the IP world is that it's a game-changer, explains Paul Koebbe, national market manager for security with Graybar (www.graybar.com). The data traffic is different—streaming versus burstive. Network owners have to understand what it's going to do to their networks.

MPEG-4 cut bit rates in half [from previous-generation MPEG-2] to about 2 to 4 Megabits, Morello explains, and says the newest-generation technology offers even more efficiency. H.264 provides an outstanding picture and compression rate has been cut in half. The bit rates are very manageable. As H.264 begins to take place and develop standards, we'll see compression rates come down significantly.

Morello adds that Pelco is committed to H.264 compression technology for the near future, and will soon roll out a series of products incorporating H.264.

With bandwidth issues being addressed, the IP-video industry now faces another level on which it is colliding with the information-technology industry, and this level is a new one for many—standards. Historically, the security industry as a whole and video-surveillance industry in particular has operated without a set of governing industry standards.

In the communications cabling industry, a regular part of the lexicon is the series of standards developed by the Telecommunications Industry Association (TIA; www.tiaonline.org), as well as the International Organization for Standardization (ISO; www.iso.org) and the Institute of Electrical and Electronics Engineers (IEEE; www.ieee.org). In particular, the TIA's 568, 569, 942, and other standards are part of everyday conversation.

Such has never been the case in the surveillance industry. By and large, systems have been built as proprietary solutions, any of them software- intensive. The plug-and-play interoperability that is the hallmark of TIA-568-based structured cabling systems has been an entirely foreign—or, more accurately, non-existent—concept for video-surveillance systems. The advent of IP-based technologies, and with it the inclusion of the familiar RJ-45 interface in video cameras, has signaled the beginning of change in that regard.

While conscious and probably even wary of the march toward commoditization, several manufacturers of IP-video equipment have assembled to begin the process of standard izing product interfaces to achieve interoperability. In fact, two separate organizations are working in parallel, each on its own set of specifications.

David Bunzel, PSIA's executive director, recalls the group's initial meeting in February 2008, which was attended by approximately 25 companies: Everyone agreed a number of things could be accomplished quickly, and we identified the low-hanging fruit.' Device discovery was one example. Until that time, security devices were not plug-and-play. Command-and-control as well as pan/tilt/zoom could also be addressed.

Bunzel adds, In June 2008, one of the companies involved in the group contributed a core specification as an open spec to be commented on, developed, et cetera. The IP Media Device Specification, as it is known, has gone from being a company-contributed document to an open document that was reviewed by our group from June through September. It was released as a 0.9 specification in September and is available for free to registrants. The document is now in the final stages to be approved as a 1.0 spec.

Pelco is a member of the PSIA, and Morello recently commented on the concept of standards for IP-video equipment: If everyone is going to follow the same specification, then manufacturers use the standard to provide value-add. They will be competing on feature sets, capabilities, support, and other characteristics.

As it is today, he says, the lack of standards is akin to soup du jour: One company has the best clam chowder, and another has the best Italian. The customer wants the best soup, but is frustrated by the lack of a baseline by which to judge the product.

The ONVIF has similar goals and objectives to the PSIA. Specifically, the group plans to standardize IP-video technologies, including video streaming, pan/tilt/zoom control, network security, device management, storage, metadata for video analytics, and event handling. The three founding members announced their intentions in May 2008 an opened the group for member inclusion in October.

In December, the group presented Version 1.0 of its core specification, and later announced that 18 members had joined. In January, the group began the process of elections to committees.

When the ONVIF announced the addition of 18 members in December, Jonas Andersson of Axis Communications, who chairs ONVIF's steering committee, commented, The resources and experience that the new members bring to ONVIF are a great asset, and we look forward to working together to establish a global standard for network video products. Based on the experience we have had so far, we expect our member base to grow quickly.

Aiming for a single standard

Each of these groups is a non-profit organization with paid-membership opportunities. They have informally spoken to each other, but at least for the time being, they continue on parallel tracks with very similar objectives.

Graybar's Koebbe comments, There is some concern about having two standard organizations beginning to define something. It could be a Blu-Ray situation. Many are hopeful that at some point the two groups will come together, understanding a single standard is better than competing standards.

Koebbe adds, All standards committees start off with division and the desires of strong manufacturers. Others involved work to round off the rough edges. That is how the TIA has done it, and over time, that can happen here.

The evident need for standardization among network-video products indicates the extent to which these systems have become a regular part of IT networks within enterprises. Graybar's Koebbe points out that for the infrastructure design and installation professional, incorporating surveillance into the mix has been a learning process. When Koebbe was asked if he and his company have been able to act as educators of Graybar's existing customer base in this regard, he responded, That's a pretty good description—educator.

But the door swings two ways, he points out: It's not only the comm/data, but also other low-voltage contractors that we're helping to understand the technologies better. We're helping security contractors better understand the lay of the land for structured cabling and the IP world. It's a bi-directional educational opportunity.

Making sense of it all

Koebbe continues, All these professionals have been our customers across time. Security contractors have known us for installation tools. Now they're coming to us as providers of physical-security technology. We help guide people to what makes sense. Analog cameras are not going away. We can help customers understand the technology. One way we have done that is to work closely with our manufacturers and help position them in the industry.

Meanwhile, two PSIA members, Pelco and Cisco, have teamed up to provide IP-video coverage over not the wired IT network but the wireless IT network.

The Pelco-video-over-Cisco-wireless package is another example of the ingratiation of network video into IT networks. For several years, trade magazines, including this one, but also many in the security space have tracked the shift of security from an enterprise's facilities function to its IT function.

Morello compares the shift to other historical events in IT: I spent 23 years in the IT space, talking to customers about telephony and Voice over IP. Over that time, IT guys realized telephony was something they could put on their networks. They absorbed the telephony closets, and pretty much overnight, the telephony manager fell under direct report to IT. Their standpoint was that telephony was just another application and didn't require personnel with a tremendous amount of telephony expertise. IT absorbed it in a very short amount of time.

Morello adds, The easy thing to say is it's exactly the same for the security space. But there's another level of complexity with security. There is always a requirement for somebody to look at video, review it, export, and make a call about sending information to law enforcement or dispatch. There's always a requirement to react and respond in the security realm. Even though IT says they're going to absorb the closet, they're not going to absorb personnel.

Graybar's Koebbe puts a punctuation mark on the discussion: It's the well-overworked word convergence.' We're looking at how not just video, but also access control, intrusion, even fire systems interact with each other. That's the true Nirvana of convergence. It doesn't matter how the signal gets there, as much as what we do with it once it gets there—all the systems interacting with each other.

He concludes, From Graybar's viewpoint, the physical layer network that's sitting in buildings is a ripe utility for things as divergent as lighting control, HVAC control, energy, and security. The entire facility can converge together into one integrated building and one massive control system.