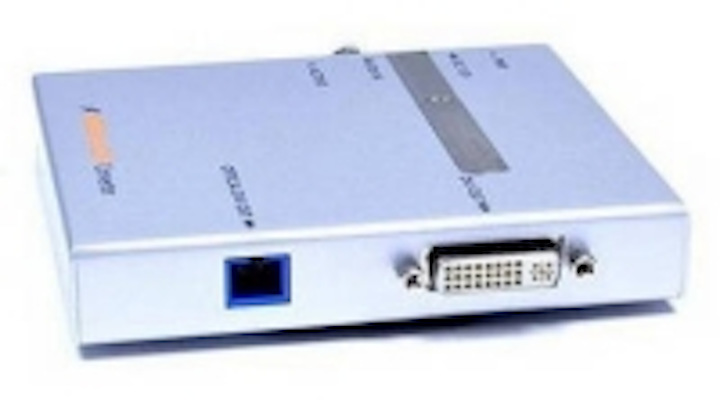 Network Technologies Inc. (NTI - Aurora, OH) has announced the addition of a 3G-SDI to DVI converter/extender via fiber cable product to its line of video converters. The 3GSDI-DVI-FOSC converts SD/HD/3G-SDI video into a DVI signal that can be extended up to 1,650 feet (500 meters) using single-strand multimode SC fiber-optic cable.

The converter/extender system has two components: the 3GSDI-DVI-FOSC converter/transmitter, which connects to the video source and also supplies video to a local DVI monitor, and an optional ST-1FODVI-R-SC receiver that connects to a remote DVI monitor. The units are interconnected by a single-strand multimode (50-micron or 62.5-micron) SC fiber optic cable.

Available for immediate sale, the 3GSDI-DVI-FOSC converter/extender from NTI costs $1,995, and the ST-1FODVI-R-SC receiver costs $380. For more information, visit http://www.networktechinc.com/3gsdi-dvi.html.

Search for Media Converters in our Online Buyer's Guide