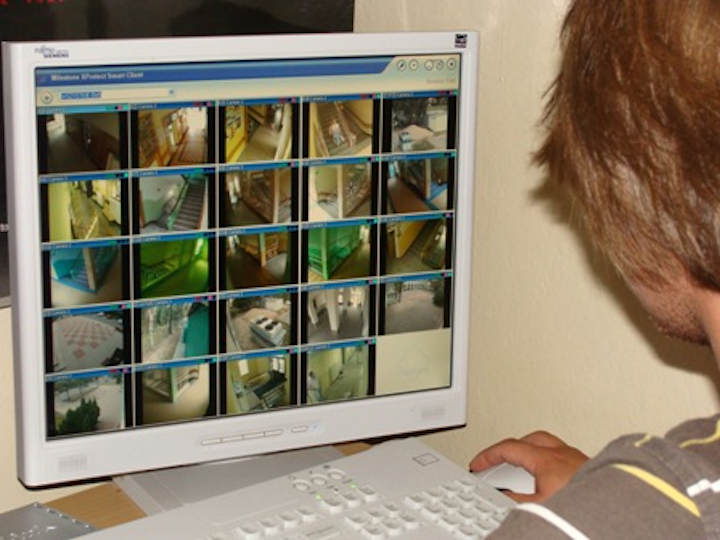 Milestone Systems recently reported that its IP-video management software, along with cameras from Axis Communications as well as copper, fiber, and wireless layer-one infrastructure have helped lower crime in the Polish city of Ursus. A district of Warsaw located to its west, Ursus has a population under 50,000 but a density of nearly 6,000 residents per square kilometer, Milestone reported. "Vandalism used to plague the educational institutions such as schools and nurseries, as well as the parks," Milestone said.

City officials investigaged an upgradeable video surveillance solution that could be easily monitored and expanded, and could also integrate with previously installed hardware. A priority was to monitor eight schools and seven nurseries, and to do so via local cable TV (photo at top of story). Another priority was to install cameras inside parks (photo at bottom of story); video monitoring was also extended to the local authority building and its grounds.

"Application of TCP/IP network infrastructure has opened new venues for the computer networks already in place," explained Stefan Zaja, head of the organizational division for the district. "In many cases, a minor upgrade to a network replaced the need for serious expenditure to create new infrastructure. System modularity and scalability combined with technological progress ensured by Milestone was the factor that swayed us in favor of this video monitoring solution with data storage and online/offline viewing. t is easy to re-set the configuration parameters of the system by adding new hardware devices and moving the cameras as current needs arise."

The majority of the IP cameras installed are fixed, unidirectional models. Where necessary, rotational cameras with pan/tilt/zoom capability also were installed. The set of approximately 300 also includes some megapixel cameras for areas requiring personal identification and/or license plate recognition.

Based on a central Milestone application, local surveillance 'islands' were built, covering nurseries, schools, other community facilities, and public buildings. These islands are linked to the municipal monitoring system, managed from the central location and shared with other users such as local police. Plans are being made to link the Ursus surveillance system to the Warsaw-wide municipal monitoring system.

"Milestone software is perfectly suited for such integration, as it is compatible with cameras by various vendors, including the analog ones that have already been installed in the Warsaw area," explained Waldemar Szylar, board director of Mirare, which implemented the Milestone XProtect system. "Through its open platform design, Milestone is very flexible. It is possible to enhance the video monitoring system by adding analytics software with new features, such as people-counting, detection of abandoned luggage, or automatic identification of road traffic offenses like parking or moving violations."

Milestone stated, "After the system was installed, the number of cases of criminal damages and theft was reduced, and access to the recordings provides the evidence for fast resolution of incidents. The surveillance cameras, apart from the monitoring functions, have proven to give a preventive effect. The knowledge that one is being watched and recorded is often a deterrent. The net effect is a reduction in crime and offense rates. When incidents do happen, high-quality recording is used as evidence in court. Ursus today is proud to have one of the lowest crime rates per 100,000 residents of all Warsaw districts."