A set of standards used in automotive and vehicular networks lays the groundwork for intelligent-building and industrial networks and cabling systems. 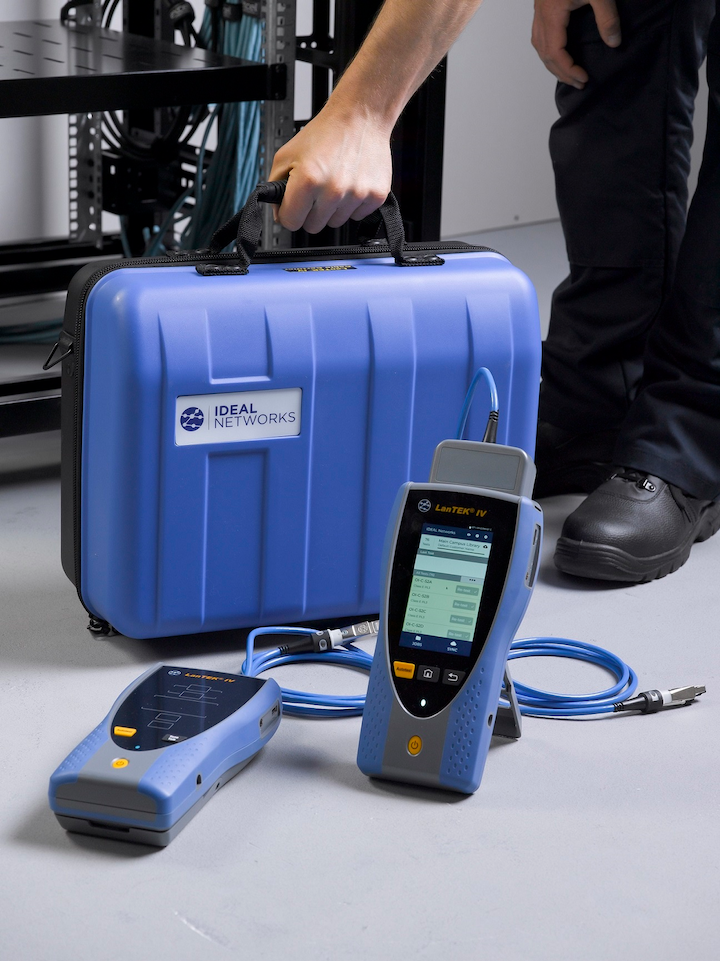 Ideal Networks recently introduced LanTEK IV, a cabling-certification tool with a frequency range up to 3000 MHz. Applications for single-pair cabling are likely to operate at frequencies as low as 100 kHz. Specifications for testing single-pair cabling systems across a frequency range that goes as low as 100 kHz are under discussion within the TIA's TR-42.7 Committee.
Ideal Networks

The standards-development efforts that will produce specifications for single-pair data transmission and single-pair cabling systems have a vehicular-related foundation upon which they will build. In 2015 the Institute of Electrical and Electronics Engineers (IEEE) completed its 802.3bw standard. Specifying 100Base-T1 systems (100 Mbits/sec over 1 twisted wire pair), the standard’s development was driven primarily by the automotive industry’s needs.

“Mainstream adoption of emerging in-car applications such as advanced driver assistance systems and infotainment has created the need for cost-effective, high-bandwidth connectivity,” the IEEE said when it published the standard in 2016. “The first of several Ethernet standards especially tuned to the needs of the in-car automotive market, IEEE 802.3bw-2015 100Base-T1 will provide 100-Mbit/sec Ethernet over a single pair. It is intended to enable the consolidation of these new, as well as legacy, in-car applications on a homogenous network architecture.”

IEEE 802.3 Ethernet Working Group chair David Law commented at the time, “This is another example of the diversification of Ethernet into new application areas, providing the opportunity for them to leverage the vast wealth of Ethernet technology.”

Also in 2016 the IEEE published 802.3bp, which specifies 1000Base-T1. Siemon’s Standards Informant library of standards documentation explains that 802.3bp supports “automotive, industrial controls and automation, transportation (aircraft, railway and heavy trucks), and other, such as carbon-footprint-sensitive, applications that benefit by a reduction in the number of wire pairs and magnetics.

The efforts of the groups that developed those standards are paying dividends to the group that has worked on the IEEE 802.3cg specification, which will specify 10Base-T1S. Tim Baggett, principal applications engineer with Microchip Technology, explained the broad market potential for this technology. “There is wide commercial interest in using 10Base-T1S to network controls and sensors in four primary areas: automotive, industrial, backplane, and buildings,” he said.

In automotive applications, it can be used as a low-cost control and sensor network. In industrial environments, 10Base-T1S can be deployed in cost-sensitive in-cabinet applications, as well as for on-machine and plantwide process-automation applications. Backplanes can incorporate Ethernet-over-PCB (printed circuit board) differential traces. And in buildings, 10Base-T1S can support connected lighting and other building systems such as HVAC, elevators, and escalators.

“One of the common goals in each of these commercial areas is to replace the multitude of legacy protocols and busses, and converge onto a single network type,” Baggett said. “By leveraging Ethernet standards, a path to faster networks is as easy as upgrading the PHY. Furthermore, standardizing on the use of IEEE 802 Ethernet protocols reduces cost by eliminating the need for protocol translation gateways while remaining independent of the PHY in use.”

The 10Base-T1S standard “allows for multiple PHY transceivers to be connected to the same single-pair balanced physical medium in a bus topology, with a reach of less than 25 meters,” he added. “This can significantly reduce cabling and connector costs, leading to reduced wiring expense and weight.” He also stated that in the development of the standard, the group prioritized significantly reducing power consumption compared to other Ethernet PHYs. Additionally, momentum has built to specify optional extensions to 10Base-T1S post-standardization, to significantly increase the number of transceivers connected to a much longer bus segment.

Baggett further commented, “There is significant interest in using 10Base-T1S within the industrial environment. Several industrial-controls companies have been actively involved in the development of both the 10Base-T1S short-reach multi-drop and 10Base-T1L long-reach full-duplex standards.”

He also provided a history lesson about the automotive industry’s adoption of Ethernet. He said that industry “began a migration to Ethernet-based networking around 2012 with the introduction of 100Base-T1 (Broad-R Reach) to meet the need for higher-bandwidth networking in vehicles. Since then, 1000Base-T1 was standardized in 2016. A standard for 2.5-, 5-, and 10-Gbit T1 Ethernet is under development within the IEEE 802.3 working group, which is considering the addition of a new project to develop a future automotive Ethernet standard for up to 50 Gbits/sec.

“The automotive segment is particularly interested in 10Base-T1S as it brings the standardization of the Ethernet protocol to low-bandwidth applications,” Baggett said. “The ability to connect multiple transceivers on a single balanced-pair media is perfect to connect sensors and actuators. By standardizing on the use of Ethernet protocols throughout the car, costly gateways are eliminated when traversing between networks.”

Siemon’s Standards Informant describes IEEE 802.3cg as “a cost-effective, low-speed Ethernet application” that “offers many benefits in support of not only industrial and automotive networks, but also intelligent building networks linking automation, HVAC, security/access, lighting, IoT, and other control and actuator-based devices and systems.

“Single balanced pair cables can be used in place of a wide range of fieldbus cables, including RS-485 twisted-pair, RG-6 coaxial, and instrumentation cables, and single-pair Ethernet can enable interoperability when used in place of RS-232, RS-485, CAN, HART, and other proprietary and custom communication protocols.”

As of presstime for this article, the IEEE 802.3cg standard was not completed. Once all the standard’s technical issues are resolved and the standard is finalized, we will report on the aspects of it that are particularly relevant to cabling professionals, including which, if any, connector interfaces the standard recognizes.

Dan Barrera, global product manager with test-equipment provider Ideal Networks, is a member of TR-42.7. In an interview he shared some perspective on the group’s activities. “As far as testing goes, we’re keeping our eye on a couple things, including frequency range, and distance and testing power.”

Some of the long-reach applications for 10Base-T1L will run at a frequency range below 1 MHz, Barrera explained. “There has been a push to start at 100 kHz,” Barrera noted. “Looking at it from the standpoint of cable manufacturers, cable behaves very differently at 100 or 200 kHz than it does at 1 MHz and above. From a testing standpoint, we run into similar issues. At 100 kHz it is difficult to have the same level of precision that we have at higher frequencies.”

Additionally, he pointed out, alien crosstalk is an electrical characteristic that will be important as these single-pair cabling standards emerge. It’s likely that the frequency range for single-pair cabling systems will be 100 kHz to 600 MHz. The 400- to 600-MHz range is where alien crosstalk becomes particularly problematic, he said. “Your application will determine” the extent to which alien crosstalk is a concern, he said. “Sensors, for example, are very low-bandwidth devices and will run at low frequencies. But there are other single-pair applications that will provide 1-Gbit speed at 15 meters. They will operate at the high end of that frequency range, to achieve that data rate.”

“One of the advantages of single pair is the cable has a small outside diameter,” he pointed out. “You can have a large number of cables, all with small diameters, in a small overall bundle size.” Contrast that with Category 6A cables, he said. When the first Category 6A cables came to market, they included thick jackets to protect against alien crosstalk. Cable manufacturers’ technological developments have enabled smaller-diameter Category 6A cables over the years. But when we turn our attention to unshielded single-pair cables, in a sense we’re hitting the reset button—and not in a good way—back to the early days of Category 6A. If UTP single-pair cables incorporate thick jackets to protect against alien crosstalk, they’ll sacrifice at least some of their small-diameter advantage.

On a positive note, Barrera said, cabling testers have incorporated four channels for four-pair cabling. “In theory, you can take a four-pair cable tester and essentially use the electronics as a four-pair crosstalk tester,” he said.

Transverse conversion loss (TCL) also will factor into single-pair testing. “In practical terms, TCL relates to four-pair cable and single-pair cable,” Barrera said. “TCL measures the cable’s ability to resist external noise—its immunity to that external noise. With single pair, the intent is to use this cable in industrial applications. TCL is a measure of how well and consistent the twist of the cable is. The consistency of that twist directly relates to the cable’s ability to be immune from external noise.”

In single-pair industrial applications, he added, shielded cabling always will be an option and may be the preferred option. “Generally, with shielded cabling, attenuation or insertion loss will be higher than UTP because the shield is essentially acting as a drain,” he said. With single-pair, “we’re talking about applications as short as 15 or 20 meters, or as long as 1 kilometer. In the longer applications, an unshielded cable will provide less loss over that distance.”

He pointed to mining operations as an example. “As someone designs a network for that type of environment, they have to consider that shielded will provide immunity to external noise, but UTP will provide less signal loss. That’s why the balance of a UTP cable is important.”

We will continue to follow developments in single-pair cabling.