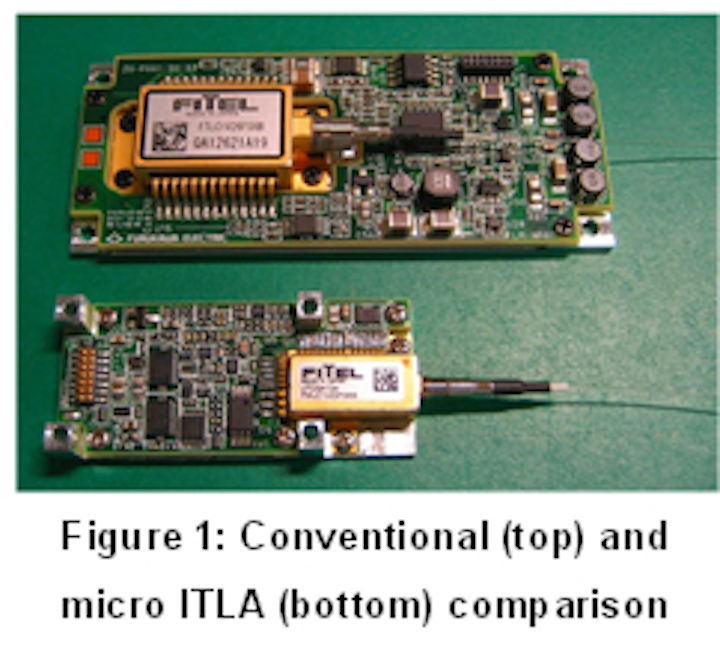 These benefits along with the acceptance of the Optical Internetworking Forum (OIF) to standardize the ITLA specification make the micro ITLAs an attractive choice for optical communication devices. The new wavelength tunable laser chips are planned to be mounted on the micro ITLA devices beginning in early 2014.

The telecommunications industry is presently accelerating the deployment of 100 Gb/s transmission systems for high capacity, notes Furukawa. Global network traffic continues to grow at a phenomenal rate in both terrestrial and wireless networks. With smartphones now a ubiquitous tool for consumers and business users, acceptance of cloud computing, data center connectivity and mass video distribution are becoming common.

The industry has converged on optical digital coherent technology in transmission systems, which involves the use of optical phases (wave conditions) resistant to signal deterioration and impervious to the effects of noise. Furukawa notes that it has already commercialized high-output and narrow-line-width ITLAs that exhibit excellent properties for signal lights from the optical digital coherent system and for local oscillator. Since the industry continues to demand higher capacity, the specifications for small and low power-consumption ITLAs have now been accepted and standardized by the OIF. The micro ITLA is a light source that has been made smaller, consuming less electricity while retaining the same specifications of conventional ITLAs that the industry is used to. These specifications include communications protocol and optical-electric properties.

On the manufacturing front, Furukawa has developed technologies for assembling and fixing high-accuracy optical components for manufacturing micro ITLAs (half the size or less compared to conventional ITLAs, 45 x 20 mm). A small package module has been developed by harnessing these technologies. Furukawa’s laser driver circuits and digital circuits expertise has also been exercised to reduce the part's form factor.

The new micro ITLA product was exhibited at OFC/NFOEC 2013. A paper on the new wavelength tunable laser chips was also presented at the IEICE General Conference 2013, which was held in Gifu, Japan on the week of March 19. View technical specifications and additional notes from OFS.