Category 8 is finally here. Are you ready to certify the 40G data center? 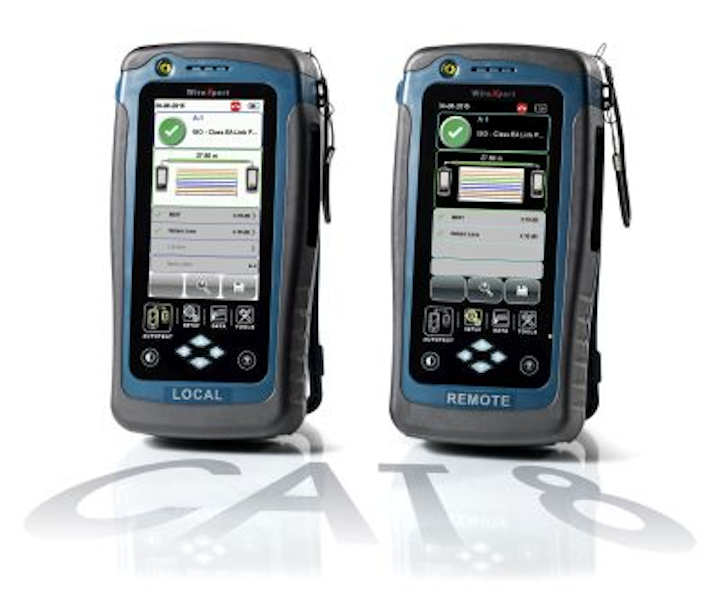 The WireXpert 4500 from Softing tests to a frequency range of 2,500 MHz, which is 25 percent more than the Category 8 cabling system maximum frequency of 2,000 MHz.

We’ve been reading and hearing about it since 2012. During its June meeting this year, TIA TR-42.7, the subcommittee responsible for developing the Category 8 copper cabling systems standard, formally approved it. With the TIA now poised to adopt the ISO/IEC companion standard 8.2, the 40G data center buildout can begin.

It is a sign of how sophisticated structured cabling technology has become that a new systems standard can be drafted three or more years before it can be built. Put another way, the bar for Category 8 was set pretty high. The need was clear: a cabled ecosystem for copper twisted-pair to support data center 40GBase-T Ethernet and beyond. Copper twinax already linked adjacent boxes in the server room. The target environment for the new standard is the data center “edge” where longer channels are needed to connect servers to switching.

Strike up the bandwidth

The parameters for Category 8 were dictated by simple economics. When you look at the total cost of ownership (TCO), 6A balanced twisted-pair is less costly to install and run on than fiber. With Cat 8’s backward compatibility organizations could realize the benefits of higher data transmission speeds while ramping capital spending over time. Math and physics, meanwhile, determined that such a channel conveying four times the bandwidth of 10GBase-T would require frequency headroom of 2,000 MHz and could no longer than 30 meters with no more than two connections.

The solution for Cat 8 cable—4 shielded pairs—was relatively straightforward. The cable itself was to be physically similar to 6A/10G, but with higher capacity. The tight weave and additional bandwidth requirement meant that shielding the twisted pairs could no longer be optional. Designing RJ45-style connectors originally meant for unshielded pairs proved more difficult. While shorter channel length and shielding reduce cable signal loss, it was found that interference associated with connectors, such as near end crosstalk (NEXT), posed a much bigger problem at the higher frequencies of 1,000 to 2,000 MHz. Squeezing that much wire and plastic into the same connector dimension without degrading the signal requires precise orientation and much tighter tolerances than were previously necessary.

Developing standards for characterizing and certifying this higher level of performance presents its own set of issues. The whole concept of certifying installed networks rests on the premise of passing or failing measured performance against a predetermined range that accounts for acceptable loss factors and includes a known margin of error. In general, the physics involved in achieving enough efficiency to transmit 40G through a Category 8 cable system was always a matter of balancing signal density and impairment against available bandwidth. As the information in a signal spreads out over a wider frequency spectrum, modulation density is more easily defined and less computing effort is needed to separate the signal from the noise at the receiving end. This principle obviously makes it easier to field test and certify installed 40G performance, as well. The only problem is that existing field-testing units lack the bandwidth.

Newer certifiers were designed for Class FA cable with test frequency headroom up to 1,000 MHz. Conventional wisdom has been to withhold development of a 2,000-MHz unit until all the Category 8 components have been designed, tested and the standard(s) approved. Limited or no availability of approved Category 8 components made it impossible to determine acceptable measurement uncertainty or typical field-testing margin for error. And yet, the overall parameters of the Category 8 draft standard have been well known since 2013, while component performance for Category 8 cable systems has been undergoing lab testing for nearly as long.

Which brings us to one particular field testing device called WireXpert. This compact handheld unit made by Softing boasts a frequency measurement range of 2,500 MHz. WireXpert is easily the first Category 8-ready field certifier on the market, and it has been available for a couple of years. How did that happen?

To make an interesting story short, the engineers who first designed WireXpert eight years ago knew 40G was coming and deliberately overbuilt a 10G unit with a frequency range to 1,600 MHz. In the process, someone realized that changing out one small component could boost this range to 2,500 MHz. It was a dizzying amount of bandwidth headroom at the time. But the cost was low, so they built it into their next release. The Softing group behind WireXpert has its roots in laboratory testing and industrial componentry. That has a lot to do with why they were able to see the solution in the first place and make the decision to come to market with a capability far ahead of its need.

Alone in the fast lane

Back in 2013, Harshang Pandya, managing director at Psiber Data and serious expert in 40G, wrote in Cabling Installation & Maintenance magazine about the availability of a 2,000-MHz certifier:

“Although many aspects of 40GBase-T still are under the early stages of development, field testing is a noteworthy exception. Field test capability already exists to provide sufficient measurement bandwidth to qualify 40GBase-T cabling during draft standardization stages as well as after standardization.”

Pandya was talking about WireXpert (Psiber Data was acquired by Softing a short time later), although he clearly believed there would be other 2,000-MHz certifiers available before the Category 8 standard was ratified. Instead, the reverse turned out to be true.

There is certainly more to certifying Category 8 cable systems than additional bandwidth. But at the moment, WireXpert is the only tester out there with the necessary frequency range. That’s good news if you are looking to upgrade certification capability now. As Category 8 components come on line you won’t have to replace or upgrade the base unit. And with built-in headroom of 500 MHz over the 2,000-MHz target, you won’t be needing to for a long time.

It bears repeating that WireXpert was born with abundant bandwidth. It’s been tried and true, and there are no rush-to-market tradeoffs. The WireXpert 4500 compares favorably with leading certifiers in all other categories, and is probably better in some. In addition to non-protruding single-component adapters, the adapter test cords are detachable. That means you can replace test cords without having to pay for an expensive new adapter. The WireXpert line includes singlemode and MPO/MTP fiber adapters, and a multimode fiber adapter compliant with the new encircled flux (EF) measurement standard.

Simon Harrison, general manager at Softing R&D in Singapore, had this to say about the development of WireXpert:

“The story is an unusual one—typically the standards come first, then the cabling systems, and finally the testers. Thanks to the foresight of its designers, the WireXpert our customers already own has bandwidth to spare as Category 8 emerges into the market. This is great news, since it means their investment will be relevant for a long time to come.”

The moral of this particular story is that 40G is here now. No more waiting—not even for 2,000-MHz certification.