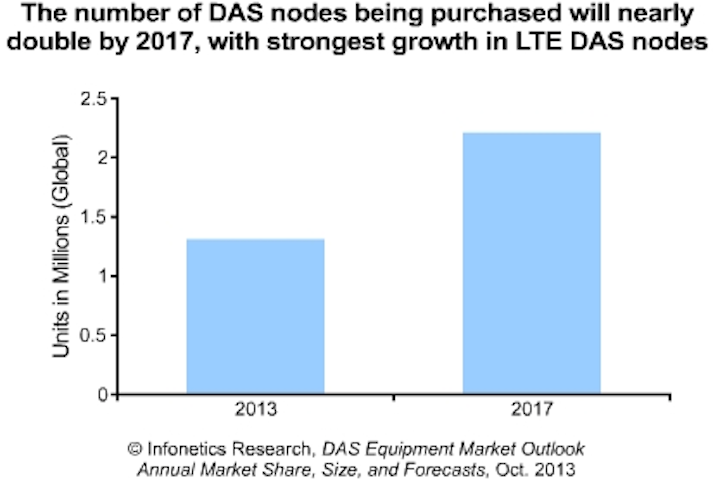 Infonetics Research has released highlights from its new DAS Equipment Market Outlook. According to the report, over 1 million DAS nodes were shipped in 2012, sending worldwide DAS revenue to $1.9 billion—an increase of 4% over 2011.

The research finds that sports and entertainment stadiums make up the bulk of the DAS business and are considered in-building or indoor DAS; somewhat surprisingly, outdoor DAS is a niche market, adds the analyst.

“DAS first became commercially viable in the late 1980s with the advent of optical fiber installed as a transport medium. Since then, the DAS business has been brisk with its lot of boom and bust, growing into a multi-billion dollar market crowded with a flurry of vendor specialists,” explains Stéphane Téral, principal analyst for mobile infrastructure and carrier economics at Infonetics Research.

The U.S. and China are identified as the world’s largest DAS markets and are expected to remain so through at least 2017 due to the number and size of their stadiums, convention centers, and transportation stations and ports.

“And contrary to all the hype and buzz surrounding small cells, the need for DAS is not going away anytime soon! In fact, most service providers have already included DAS as a key component of their future ‘small cell’ mobile network expansion plans,” continues Téral.

Teral concludes, “With no signs of abating over the next 5 years, we believe global DAS revenue will grow at a CAGR of 3% from 2012 to 2017 and DAS node shipments will double, driven by a combination of coverage and capacity improvements in specific venues.”