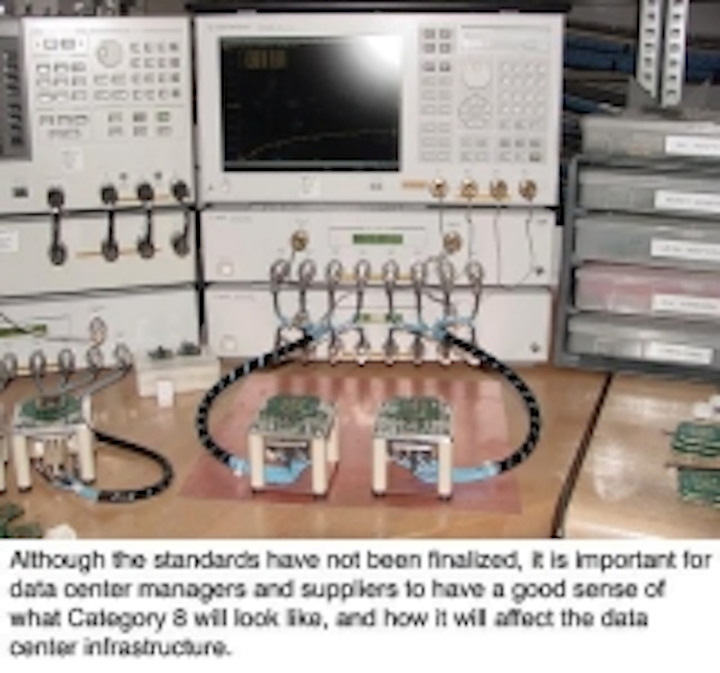 By Ed Sullivan -- While "Category 8," the classification for the next-generation twisted-pair cabling specifications, is still in the development stage, the outlook looks quite positive that it will be specified to 2 GHz, four times today’s bandwidth of 500 MHz, promising a new copper speedway for data centers in the not-too-distant future.

“What Category 8 copper cabling will do for the data center is let them transport data four times faster on essentially the same type of cable they now use,” says Sterling Vaden, chair of TIA 42.7, the TIA subcommittee on copper cabling systems. “That makes great sense application-wise and economically, because the intended data rate being developed by IEEE is 40-Gb, 4 times faster than 10GBase-T, using the same or less power per port, which has an unofficial target of less than 2 Watts.”

Vaden’s subcommittee is charged with writing the standards for the performance of copper twisted-pair cabling. Although the TIA-568-C.2 Balanced Twisted-Pair Telecommunications and Components standard will not be finalized for several months, Vaden says it is important to many data center managers and suppliers that they have a good sense of what Category 8 will look like, and how it will affect the data center infrastructure.

Most likely composed of four (4) shielded copper twisted pairs, with the similar overall diameter as Category 6A and Category 7A cables, the Category 8 cabling system under development also will use the popular modular RJ-45 style of connectors. The intention of the Category 8 standard is to be fully backwards compatible with the previous Category 6A and lower standards.

In order to support the 40Gb data transmission, Vaden anticipates that the overall length of the Category 8 cabling channel will be limited to 30 meters. This has been determined as an objective of the IEEE Next Generation BASE-T Study Group.

In many ways Category 8 will be a balancing act

“That is the direction that the IEEE is going in terms of supporting the 40-Gb data rate over twisted-pair cabling,” Vaden explains. “We’ve performed cabling surveys in order to assess what the reach needs are within the typical data center, and the surveys indicate that the majority of the applications within the data center can be serviced with a 30-meter overall reach. The results of these surveys have also been reviewed and confirmed in the IEEE study group.”

The biggest question asked by data center users about the new standard, according to Vaden, is how are you going to go four times faster over the RJ-45 connector?

“That is the thing that people have a difficult time understanding,” he explains. “However, according to research performed by OCC [Optical Cable Corporation, where Vaden is the senior principal engineer for copper datacom products] and other companies cooperating in Category 8 standards development, it looks quite possible to transport data four times faster through the connector. What we have learned is that the connectors are not the primary limiters to cabling transport speed. The insertion loss of the cable is the primary limiting factor.”

Vaden admits that the obvious way to overcome cable insertion loss is to make the cable bigger. That’s not likely to happen, because there are a number of design considerations that restrict moving to larger cable conductors than those that are being manufactured now. Plus, in Vaden’s view, using larger gauges would make the cable too big and bulky. Therefore, the practical gauge limit for copper twisted-pair cables has, for all intents and purposes, already been established with Category 6A and 7A cables at a maximum of 22 AWG.

How will the data transport performance of Category 8 cable improve over its predecessor versions?

Vaden’s employer, OCC, is one of the key players in developing new standards and requirements and also products that test and service those requirements. OCC also offers that equipment to the standards bodies as a basis for reference measurements, as well as contributing the basic parameters around which the testing needs to be done in order to assure compliance to the standards.

According to Vaden, Category 8 cables will physically be very similar to shielded Category 6A or Category 7A cables. The conductor size will not change, nor should the overall diameter.

“Category 6A and Category 7A cables and earlier versions have been sold into the data center marketplace for a long time,” he adds. “They are very well understood. Data cabling is much less expensive than other data center equipment. Plus, the service life of copper cabling, including Category 8, is 20 years. So, it seems very logical to suggest that when data center managers install copper cabling, they should install the highest performing cabling, so that when they upgrade other equipment, they can plug it in without having to re-do the cabling plan.”

All things considered, Vaden says he believes the intention of TIA-568-C.2-1 Balanced Twisted-Pair Telecommunications Cabling and Components Standard, Addendum 1: Specifications for 100Ω Category 8 Cabling, is to provide a familiar and economical solution that is easy to implement. One of the key factors is the ability of 40GBASE-T equipment to do auto-negotiation, or switch over to multiple data rates, based upon the equipment connected at the other end.

“Auto-negotiation is a big feature of all the BASE-T applications,” Vaden concludes. “That feature automatically enables equipment to adjust data transport rates, and the anticipated application would be able to auto-range to 40-Gb and slower data transmission speeds, based upon what’s plugged in at the other end. That’s a pretty big feature that networking equipment suppliers want to leverage.”

Ed Sullivan is a technical writer based in Los Angeles, CA.