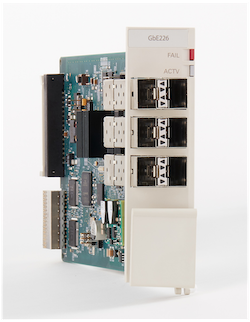 Per a Tellabs press release, "The purpose of this deployment is for the network operator to utilize CWDM, and the GbE226 card, to gain bandwidth relief at their fiber-constrained remote sites. The CWDM configuration combines the GbE226 10-gigabit uplink, (that aggregates multiple 1-gigabit connectivity from each Tellabs 1000 shelf), along with the existing OC12 Time Division Multiplexed (TDM) transport traffic. The CWDM device, that is installed in existing Tellabs remote broadband cabinets, provides fiber optimization by transmitting the OC12 (1310 wavelength), and the GbE226 10 gigabit (1471 wavelength) across a single fiber cable."

“The beauty of this configuration is that it cost-effectively allows TDM and Ethernet transport, from the OC12 and GbE226 cards, to share the same fiber cables, which fixes the problem of bandwidth exhaustion at fiber constrained locations,” explains Mike Kavanagh, Tellabs' vice president of broadband sales.