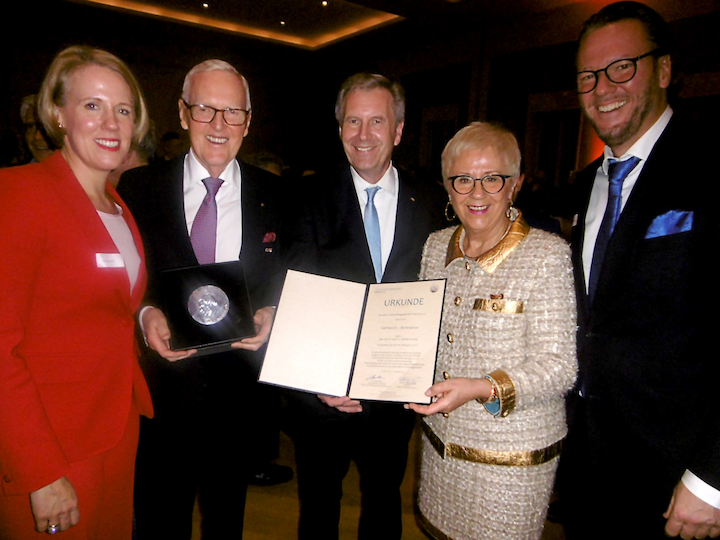 Dietmar Harting, longtime chief executive officer and personally liable partner of the Harting Technology Group, recently was honored at a ceremony at Herrenhausen Castle (Hanover) by the Chairman of the Board of the University Society, Dr. med. Volker Muller, and by former German President Chrstian Wulff. Dr-Ing e.h. Dietmar Harting received the Karmarsch Medal of the Leibniz University Society Hanover e.V., for his outstanding commitment as a shaper and supporter of technology, science and industry. He has been actively engaged as president of national and international associations and bodies for norm setting, standardization and innovation, thereby contributing significantly to the positive development of the German electronics and electrical-engineering industry.

From 2003 to 2009, Dietmar Harting headed the German Institute for Standardization e.V. (DIN), and from 2008 to 2009 he was at the helm of the European Committee for Electrotechnical Standardization (CENELEC). Additionally, from 1998 to 2004 he led the Central Association of the Electrical Engineering and Electronics Industry (ZVEI).

“Many of the normative foundations that Industry 4.0 and industrial digitalization today are based on, were created during this time,” Harting said when announcing Dr. Harting’s honor. “From 1995 to 1998, Harting was on the Council for Research, Technology and Innovation of German Chancellor Helmut Kohl, and between 2004 and 2008 he was a member of the Partners for Innovation initiative of German Chancellors Schroder and Merkel.”

The medal was donated in 1925 by the Hannoversche Hochschulgemeinschaft (now known as the Leibniz University Society Hanover e.V.). The medal is in memory of Karl Karmarsch, the first director (1831-1875) of the Hanover University of Applied Sciences, later the Polytechnic School and Technical College, forerunner of today’s Leibniz University. The medal, which bears a picture of Karmarsch (1803-1879) and a dedication on the reverse, is bestowed in odd-numbered years. The award is given to individuals who have made outstanding contributions to the promotion of technology and business. Previous winners have included former presidents of the Federation of German Industries (BDI), Hans-Olaf Henkel and Tyll Necker, CEOs Prof. Ferdinand Piech (VW), Jurgen Groβmann (RWE), Bernhard Plettner (Siemens) and Wulf Bernotat (E.on), as well as Maria-Elisabeth Schaeffler, shareholder of the Schaeffler AG.